May has not been a good month for Malaysian badminton. Malaysia were knocked out in the quarter-finals of the ongoing Thomas Cup finals in Wuhan, China and world No. 1 Datuk Lee Chong Wei is nursing an ankle injury. In contrast, it was in May, 20 years ago, when Malaysia lifted the coveted Thomas Cup. Team captain Razif Sidek and former Badminton Association of Malaysia president Tan Sri Elyas Omar speak to StarMetro on their experiences.

TAN Sri Elyas Omar, the man at the helm of Badminton Asso-ciation of Malaysia (BAM) when Malaysia won the Thomas Cup 20 years ago, will always remember the celebrations at Stadium Negara.

“Malaysia was meeting arch rivals Indonesia in the final. The Indonesian fans at the stadium almost equalled the Malaysians. The whole country was behind our players. We were able to feel the support from the fans. The players were all fired up by the atmosphere.

“When we became the champions, it was a proud occasion, not only for me but for the whole team. It was our gift to the country,’’ said Elyas.

Then Kok Keong went on court to take on the more formidable Alan. Kok Keong, playing his last Thomas Cup finals, battled for almost an hour for a 15-6, 15-12 win. That really turned the tide in favour of Malaysia and Malaysia led 2-1.

It was then left to Beng Kiang and Soon Kit to deliver the winning point. The duo were in mesmerising form to down Ricky-Rexy 15-12, 10-15, 15-8 to send Malaysia into a frenzy and win the Thomas Cup after a 25-year drought.

With the tie wrapped up, the third singles was just a formality where Joko scored a 15-3, 15-7 win over Yoke Meng.

But Elyas said the success was due to a systematic training programme which began in 1986.

“Our initial target was to become the champions in 1990. Unfor-tunately, we lost to China in the final in Tokyo. Then we started planning for the 1992 Thomas Cup campaign.

“Our biggest asset was the players. We had seasoned players like Kok Keong, Razif and Jalani while Rashid, Beng Kiang and Soon Kit were the rookies. As the president, I had to take the responsibility to guide and motivate them. I would visit them regularly to get feedback from the coaches and players.

“Of course, there were some misunderstandings among the players. But when they went on court, there was only one mission — to win the Thomas Cup for the country. It was good human management. We also drew up mental training programmes.

“We did not get funds from the government but private organisations were our supporters,’’ said Elyas.

The BAM, he added, did not promise the players any rewards. But the rewards started coming in after their victory. The Kedah state government presented a bungalow to Beng Kiang, The Selangor state government, Sports Toto, National Sports Council (NSC) and other states also rewarded the players and officials.

“The rewards were justified as the players had shown excellent teamwork and patriotism. I am also proud of the players as they did not make any demands. Of course, the players benefitted with some business opportunities,’’ said Elyas.

However, Elyas, who was not re-elected as the BAM president in 1993, is sad with the current state of affairs in badminton.

“The BAM should have capitalised on the 1992 triumph. The players should have been used to attract a bigger pool of juniors,” he said.

He said the BAM should have guided players like Mohd Hafiz Hashim and the doubles pair of Koo Kien Keat-Tan Boon Heong.

“Hafiz won the All-England title while the doubles pair were gold medallists in the Asian Games. We have Lee Chong Wei. We should be among the top ranked badminton country in the world. But our rankings has dropped drastically and we are struggling in the Thomas Cup.

“The BAM will have to review their training programmes. We have the players and their welfare should be uppermost. With the facilities and government support, we should be the best in the world,’’ said Elyas. 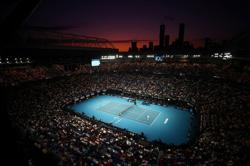