WHO says loving the planet isn’t worth its salt?

However, there is a catch. The cars should be bought within Petaling Jaya.

The free car parking for the said period alone will save the car owners RM300.

MBPJ councillor and Green City committee chairman Khairul Anuar Ahmad Zainudin said the council had approved the green initiative to entice residents to go green, cut carbon emissions and at the same time save money in a whole new way.

“We are encouraging people to improve the environment while they spend less, earn more, save more and enjoy rebates on their assessment.

“We have recognised that the city council is moving forward with these initiatives - offering more incentives rather than regulatory means,” Khairul told Star Metro after the council’s full board meeting yesterday.

MBPJ One-Stop Centre chief Lee Lih Shyan, who has drawn up various green initiatives, explained that the free hybrid car parking was included in the 2012 council budget thus adding up to the earlier introduced 25% rebate on the annual assessment.

“Our free hybrid car parking for three months is done without hassle.

“Owners of the cars are required to make available photocopies of the car registration document and receipt of purchase to the MBPJ’s Treasury department at Jalan Yoong Shook Lin,” he said.

Lee added that only after verifying the documents, the free parking coupons would be issued.

Lee said green investing is finally making its impact which is great news for the environment and a chance to save costs.

“Our aim is to create the concept of responsible investments through the Petaling Jaya Low Carbon Green Rebate Assessment Scheme to give rebates of up to RM500 to residents who incorporate energy efficient upgrades or follow a green lifestyle,” he added.

On July 21, StarMetro had reported on the scheme titled “Green giveaways” where residents who cycle to work get 25% discount and those who install a solar water heater at their homes would also get 25% discount.

As of Oct 21 under the pilot project, only 49 took up the scheme as opposed to the council’s target of 100.

“I hope the scheme is adopted by all. Our approach is to engage the people to become environmentally smarter, through economic incentives,” he added. 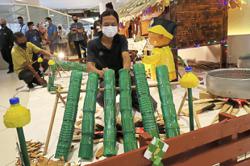