Yee looking at the broken tiles along the covered walkway at the station.

BADLY maintained infrastructure and facilities at the Taman Kepong KTM station in Kuala Lumpur are upsetting residents and commuters who want the matter addressed.

The parking lot riddled with potholes, nearby drains covered in undergrowth and non-functioning street lamps are among their grouses.

They said poor lighting in the area had led to break-ins and vehicle thefts.

Kepong community activist Yee Poh Ping said a complaint was made to KTM in February but no action had been taken to date.

“Closed-circuit television (CCTV) cameras have been installed but they are not working and there are no security guards in sight.

“We urge the new Transport Minister Anthony Loke to inspect the area,” he said, adding that the train service had deteriorated in recent years.

It was reported on Monday that Loke rode the LRT, during peak hours on the Kelana Jaya line, to inspect the facilities and identify measures to improve the service. Residents using wooden slabs to cover potholes at the carpark.

Taman Kepong resident CL Poon, 65, said he was worried about Aedes mosquitoes breeding in clogged drains and at piles of rubbish nearby the station.

A check by StarMetro also found potholes at the parking lot, which residents have covered with wooden boards as a temporary measure.

Tiles at the covered walkway are also broken, with broken furniture and baggage left there.

Resident Krishya Khala, 26, who commutes a few times a day, is upset with the frequency of the trains.

“My younger sister, who studies in Putrajaya, uses the train every day. However, it often arrives late or the trains do not work on rainy days,” she said.

Meanwhile, Yee said he was still considering if he should continue his non-profit work highlighting local issues in Kepong after losing in the 15th General Election (GE15).

Yee, who contested as an Independent candidate, garnered 1,461 votes against incumbent and current MP Lim Lip Eng from DAP, who obtained 64,308 votes.

“Many people have suggested that I retire from community work. I will finish all pending work and start thinking about my next move,” he said. 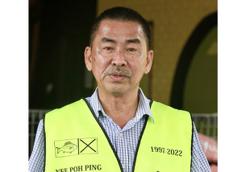