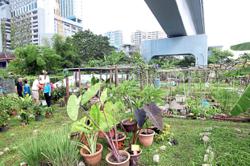 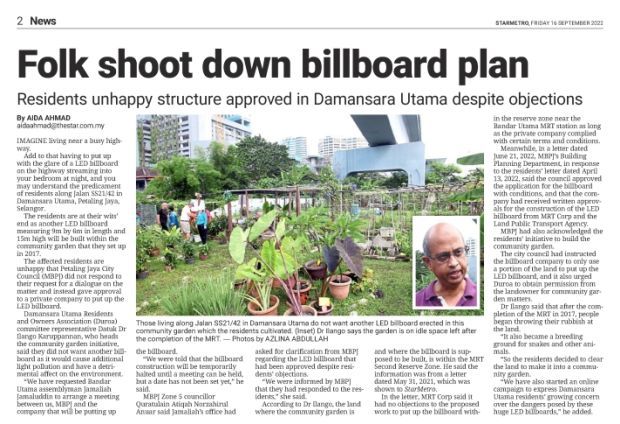 With the LED billboard along Jalan SS21/42 in Damansara Utama going ahead as planned, a group of residents are considering taking the matter up with Selangor government.

Damansara Utama Residents and Owners Association (Duroa) representatives were told on Monday at a meeting held at Petaling Jaya City Council (MBPJ) headquarters that the approval for the billboard had been given in January.

This was despite the fact that over 1,200 people had objected via an online petition against its construction within a community garden.

Datuk Dr Ilango Karuppannan, who heads the community gardening group, questioned the need for an LED billboard in that location and said that it could affect residents living nearby.

He said there was an existing LED billboard just 100m from the site of the proposed new billboard and it had been causing light pollution thus disrupting residents’ sleep.

“Some 72% of the residents here are above 50 years old and the bright lights from the LED would cause uneasiness among seniors, especially at night when they go to bed. So we hope the council will consider the residents’ predicament.

“The community garden will also need to make way for this billboard.

“We have helped to keep the place tidy until today,” Ilango added.

Residents suggested that a static billboard be built at the edge of the reserve land instead of an LED billboard so that it would cause less disruption.

MBPJ councillor G. Suraise, who chairs the billboard technical committee, said the MRT reserve land was turned into a community garden by residents.

“However, they do not have approval for the garden.

“The landowner is MRT Co and the company has no objection to the LED billboard.

“We have taken note of the residents’ concerns,” he said.

Last month, StarMetro reported that residents were at their wits’ end as another LED billboard would be built within the community garden that they set up in 2017.

The affected residents were unhappy that MBPJ did not respond to their request for a dialogue on the matter and instead gave approval to a private company to put up the LED billboard. 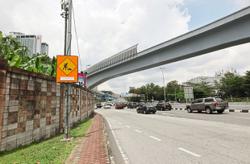 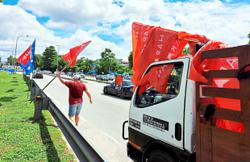