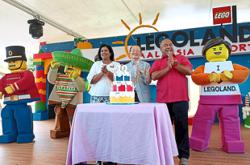 Visitors having hands-on experience of drying coffee beans at the farm and factory in Simpang Renggam, Johor.

Discovering Liberica coffee farming from the mass media prompted Lim May Ken to make a trip from Kuala Lumpur to Johor with her family.

She said she had contacted businessman Jason Liew directly to arrange for a tour of the factory and farm.

In addition, the family of four also brought along their bicycles to explore other parts of Johor.

“We enjoy being outdoors and visiting places as a family,” she said at the coffee processing factory in Simpang Renggam.

Lim, 41, said the visit was informative and it was an eye-opener on how coffee cherries were picked, processed and brewed.

“We never realised so many processes were needed before we could enjoy a cup of coffee,” she added.

Genesis Universal Travel Sdn Bhd co-founder Paul Teo, whose company has been handling tours to Liew’s factory and farm since 2019, said the coffee tours were conducted at least twice a month prior to the Covid-19 pandemic.

“However, everything took a beating during the various phases of the movement control order during the pandemic.

“Now we have tours once a month for 25 visitors,” he said, adding that the coffee farm receives visitors from other parts of Malaysia and Singapore.

He expects the coffee tours to pick up, especially with Liew’s recent wins at two international coffee competitions.

“That has created a lot of hype about Liberica coffee from Johor,” Teo said, adding that his company usually charges RM40 for adults and RM30 for children for tours that run from 9.30am to noon.

At the end of the tour, each participant gets to taste the freshly brewed coffee on site.