“Now, it is jointly managed by MPSepang Health and Environment Department and KDEB Waste Management,” he said.

Abd Hamid said the recycling centre was built by Cyberview Sdn Bhd at a cost of RM1.11mil.

“MPSepang Valuation and Property Management Department had then appointed DRB Hicom Environment and Services (DHES) to oversee the operations.

“The contract with DHES ended in December last year and the centre was returned to MPSepang Health and Environment Department.

“After which, the department requested for allocation to spruce up the premises,” he said.

The centre is located at the park-and-ride facility in Jalan Rimba Permai, opposite Cyberjaya Fire and Rescue station.

The items can be exchanged for cash in a buy-back programme, applicable for walk-in and drive-through customers during operational hours.

All items will be weighed and payment made accordingly.

The recyclables can also be dropped off after hours.

The centre’s operating hours are from 9am to 5pm, from Monday to Saturday. 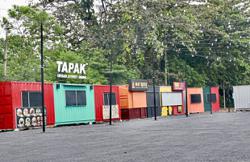