Turtle sightings at the lake have been less frequent over the last three months, says a parkgoer.

PARKGOERS at Taman Tasik Ampang Hilir, known for turtle sightings, are concerned about the dwindling number of these reptiles and have put the blame on poachers.

Aside from turtles, gold fish as well as colourful flowerhorns and catfish are also often spotted at the park where the public enjoy their morning walks.

A parkgoer, who declined to be named, told StarMetro that visitors had noticed scarcity of turtle sightings as of three months ago.

“We assumed the turtles had gone into hibernation.

“But on Aug 12, I saw a poacher hauling a huge turtle out from the lake.

“This was before sunrise when the park gates were still locked.

“The poacher was about to carry the turtle away when he was stopped by another park visitor who told him to return the animal to the lake,” he said.

He added that the poacher demanded RM400 from the woman, but she gave him RM100 and he left.

“The stranded turtle was returned to the water by another helpful passerby,” he said.

Chong Chan, 73, said there was a time when visitors could see turtles climbing up to grassy banks by the lake.

“Some of turtles would climb too far up, get stranded and risk getting roasted in the afternoon sun.

“I used to pick these turtles up to return them to the lake, but these occurrences have become rare lately,” he said.

Nuha Yahya, 33, said security needed to be improved in the park.

“There are ‘No Fishing’ signs around the lake, but I have seen anglers casting their rods in the evenings.

“I don’t think the authorities have been strict on this issue because I know they sometimes hold fishing competitions here,” said Nuha.

Although no angling activity was seen within the park grounds, a check around the lake’s perimeter found fishing lines tied to overhanging tree branches beside the banks.

A discarded spring hook was also found on the grass.

The park’s security guard affirmed that fishing was not allowed in the park and anyone spotted doing so would be told to leave.

“There was a group of young boys who came in with hooks and lines wound around mineral bottles. They were chased out,” he said.

The guard added that although the signs only mentioned ‘No fishing’, this also included the turtles in the lake.

StarMetro has reached out to DBKL for comment on this issue. Turtle sightings at the lake have been less frequent over the last three months, says a parkgoer. 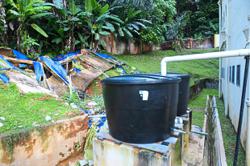 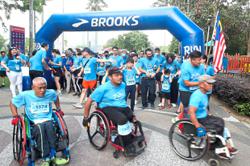