THERE were 324,509 passenger arrivals at Penang International Airport (PIA) in June.

“Penang has seen an influx of international travellers since the reopening of Malaysia’s international borders,” he said during a site visit to the PIA.

Yeoh said his office and Penang Global Tourism had been working with Tourism Malaysia, its partners and industry players to ensure the sustainability of the industry.

“We have taken various initiatives to boost domestic and international tourism, including through a global advertising campaign with promotions and deals curated exclusively for travellers.

“We have also hosted virtual travel fairs catering to travellers from Asia, Europe, the Middle East, Mediterranean and Oceania regions,” he said.

He revealed that flights from Singapore, Indonesia (Medan) and Thailand (Bangkok) to PIA were among the highest recorded recently.

“We have 52 flights from Singapore per week, which include AirAsia, Malaysia Airlines, Jetstar, Tigerair and Singapore Airlines.

“There are also 21 flights from Medan to Penang per week by AirAsia, Lion Air and Citilink.

“In addition, seven flights by Thai Smile and 10 by AirAsia fly from Bangkok to Penang,” he said.

Yeoh said talks were also being held with airlines from Hong Kong, India and countries in the Middle East.

He pointed out that during Expo 2020 Dubai early this year, the welcoming video featured Penang tourism ambassador Datuk Nicol David during the launch of Penang Week at the Malaysia Pavilion.

“We have taken part in Arabian Travel Market in Dubai, Tourism Malaysia Roadshow in South Korea and Malaysia Healthcare Travel Council in Surabaya, Indonesia, to increase Penang’s exposure on the global stage.

“Penang continues to be one of the preferred destinations for international travellers.

“We will not be content with the numbers and will work harder,” added Yeoh. 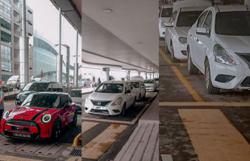