THE community farm Kebun Kebun Bangsar in Bangsar, Kuala Lumpur, should be allowed to continue its operation as a way to promote urban farming, says Maria Chin Abdullah.

The Petaling Jaya MP said this was crucial as the Klang Valley was running out of green lungs to accommodate physical developments.

She said the farm which had been in the area for the past five years, was among few places left that still preserved and cultivated greenery.

"Efforts to promote urban farming must be stepped up, especially given the current food security crisis," she said in a statement on Friday (July 1).

She urged the authorities to reconsider their decision to evict the garden, citing that some 8,000 people had signed an online petition to save the place.

She also called on the Prime Minister Datuk Seri Ismail Sabri Yaakob to intervene in the matter.

On Tuesday (June 28), the Federal Territory Lands and Mines Department (PTGWP) announced that an eviction notice was issued against the farm for violating the terms of temporary occupation licence (TOL).

This licence, issued for a nursery, prohibits the farming of livestock and certain types of crops, in addition to building permanent structures.

PTGWP also said that it received complaints from locals who were uneasy with the operation of the farm.

On Wednesday (June 29), the department announced that a discussion would be held between the farm proprietor and Kuala Lumpur City Hall (DBKL) soon.

This meeting, to take place on July 14, is to ensure the type of activities at the Bangsar community farm comply with the law.

Among the conditions were that permanent structures must be demolished, and all livestock removed from the land plot.

The planting of permanent trees was also prohibited, alongside any big recreational events, to comply with safety aspects outlined by the Tenaga Nasional Berhad.

Starting March 15, all TOL applications for nursery purposes must be made directly to DBKL and not PTGWP. 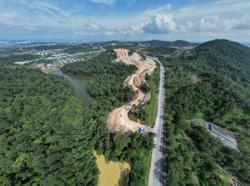