Inculcating interest: A young resident of PPR Pekan Kepong is among the many volunteers who are nurturing padi planted in the flats compound. — AZLINA ABDULLAH/The Star

URBAN farms abound in Kuala Lumpur, but the one in PPR Pekan Kepong stands out for growing an unusual crop in the city – padi.

Although it is normally found in open fields, the community gardeners are growing padi from shallow do-it-yourself planter boxes and polybags.

The first crop was harvested in April, followed by the second in August.

Each harvest yielded about 3kg of padi seeds.

The idea was mooted by Persatuan Lestari Alam Malaysia, which is an association that promotes sustainable living.

Its president Rashdan Rashid said several members went to Kedah to learn how to plant padi last year and shared their knowledge.

They guided Persatuan Sosio Ekonomi dan Alam Sekitar (Perseas), which took up the challenge of planting padi at the PPR Pekan Kepong compound under the Local Agenda 21 programme by Kuala Lumpur City Hall. Perseas chairman Nor Hilmi Mohamad, who is also a PPR Pekan Kepong resident, said they wanted to educate people, especially the younger generation, on how the rice they eat every day was grown.

“We planted the aromatic rice MRQ74 variety and one seed can grow into a bunch of 20 to 30 stalks.

“It can produce 350g of seeds, and half that weight when processed into rice.

“We did not process the seeds into rice grains because our aim was more educational.

“Furthermore, the quantity produced was very low,” he said.

Nor Hilmi said padi could be grown in almost any place that received a lot of sunlight and water.

The soil must be moist, and that is the reason why padi needs good irrigation, he added.

“To replicate the ideal condition, we need to ensure the soil is always moist.

“So, in an urban setting, we had to make sure the plants were watered twice a day,” he said. 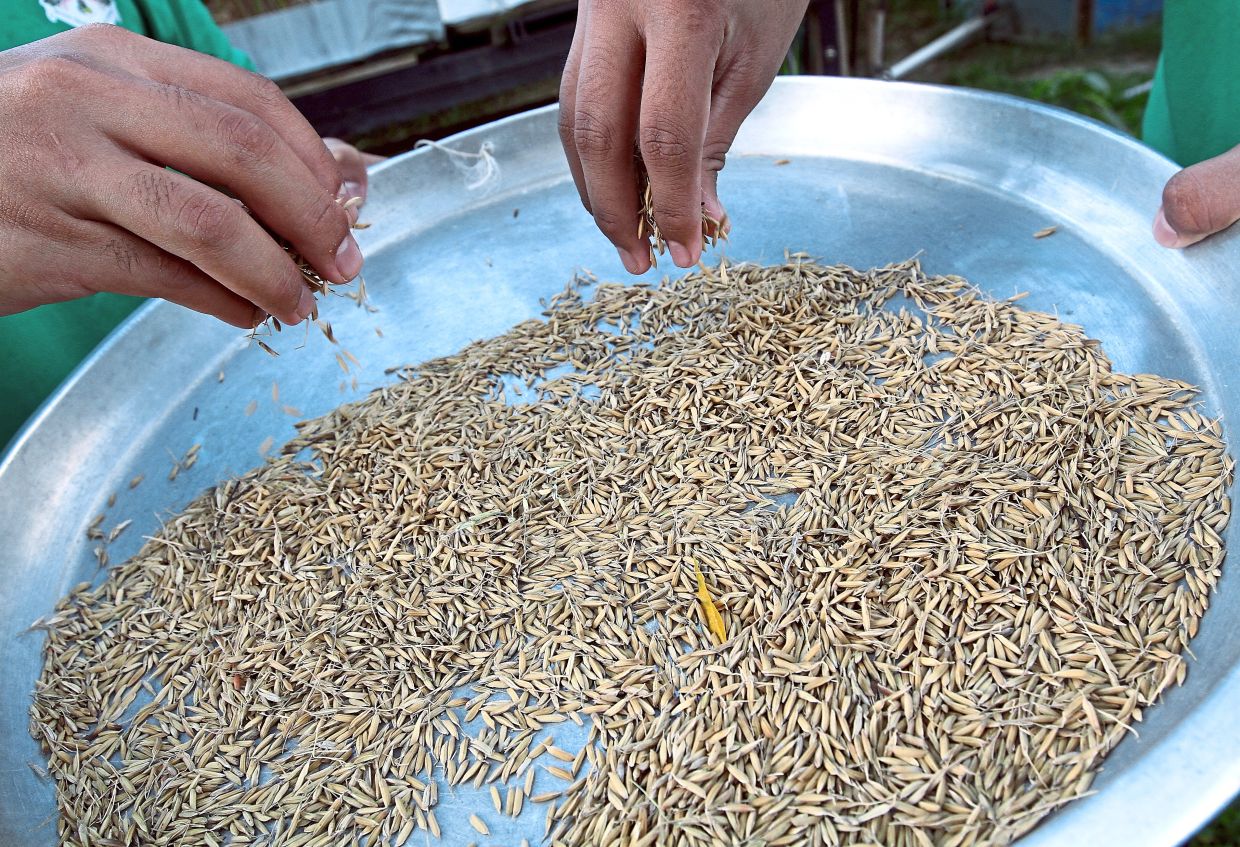 The community has harvested about 6kg of padi seeds so far this year.

Nor Hilmi said many people who heard about the project were sceptical until they saw the plants for themselves.

“We did not succeed on our first try as the planter boxes tipped over during heavy rain and we had to start over,” he said.

Nor Hilmi said they planned to plant glutinous rice varieties on a bigger scale soon, in hopes of making and selling a Malay traditional snack called emping.“Now that two batches of rice seeds have been successfully harvested, the community is confident of planting more padi to make rice products for sale

“We are also big on recycling and will plant the padi using the aquaponic method, which is with polybags made from used banners and mineral water bottles,” he said.

Among the caretakers of the padi plants were students Hazwan Fahmy Hamzah, 20, and 17-year-old Muhammad Zulkiflie Jalan

Hazwan said he learnt about the padi planting project and found it interesting.

‘I had a lot of time to spare and decided to join the group and learned to cultivate padi.

“I am not very interested in agricultural activities or have any plan to pursue it in the future. This was more like a fruitful pastime.

“But I am very proud of myself for being able to grow padi from a seed to a plant and harvesting.

“My friends were in disbelief and I had to bring them over to the garden to prove it,” he said.

Muhammad Zulkiflie said he also took part in the project to pass time.

“We cannot go out much. So, when I was home, I came down to tend to the padi plants.

“Although there were others who watered the plants twice a day, I came by almost every day to check if the soil was moist,” he said.

Rashdan said the association was eyeing a 0.6ha area under high tension cables in Bukit Damansara to plant padi in a bigger area.

He said the place was ideal and they planned to rope in residents from a welfare home nearby to grow it for profit.

“The welfare home is facing financial difficulties. Instead of expecting donations and handouts, it should be self-sustaining.

“Food security is a serious concern and everyone should know how to grow their own food,” he said.

Rashdan said they were preparing the necessary documents to utilise the land.

“We hope to start the padi project sometime early next year.”