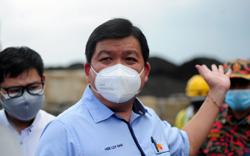 A PILE of crumb rubber which caught fire on Saturday (June 26) in Jalan Pulau Carey, Teluk Panglima Garang, is still belching plumes of black smoke despite efforts from firefighters who have been stationed at the scene for the last 24 hours.

Firefighters from the Teluk Panglima Garang and KLIA Fire and Rescue stations who arrived at the scene at 4.12pm on Saturday cited difficulties such as the absence of fire hydrants and pile height as contributing reasons.

“We had to pump water from a nearby river some 500m away. Just to set up the pump and hosing system alone took us an hour.

"From experience with rubber fires, it will take two to three more days for it to be fully extinguished,” he said on Sunday (June 27).

Four excavators had to be deployed to break up the molten rubber so that water could penetrate and cool the deeper layers of the burning pile.

Mohd Azril said this is the second time in two years that firefighters responded to emergency calls in the same area.

The fire is believed to have been caused by burning at a neighbouring charcoal factory.

The pile of crumb rubber covers an area approximately the size of a single-car garage.

At the time of writing, the fire has been 85% contained and no injuries have been reported.

Residents in Taman Yayasan, Jenjarom, about 5km from the blaze site, have described the thick black fumes as a "frightening" sight. They have also reported finding flecks of black soot on their cars.

Concerned that their health is at risk, some residents have switched off their exhaust fans for fear that fumes and particles will enter their homes.

Resident Tan Ching Heng, who is also chairman of environmental group Persatuan Tindakan Alam Sekitar Kuala Langat, urged the authorities to step in to prevent an incident like this from happening again.

Tan pointed out that even after the fire has been put out, there will still be harmful chemicals and poisons released into the surroundings to worry about.

He added that the group had also earlier raised concerns in a memorandum to the Selangor Mentri Besar last year on the proliferation of illegal factories in the area.

“We want the local authority, district Land Office and Environmental Department to go to the Jalan Pulau Carey area and monitor these factories to ensure their activities are carried out according to environmental guidelines,” he said.