The public can drop off unwanted fabric items at MBIP's pink bins at the Sutera Mall carpark and Universiti Teknologi Malaysia.

“We were able to harvest about 40kg of chillies last month.

“The chillies are a good addition to our existing plants such as long beans and brinjals which we supply to nearby markets and restaurants to generate income for the community.

“This is useful for the committee to help residents in need, especially as many have lost their source of income due to Covid-19.

“We also plant herbs such as daun kaduk (wild betel leaf), daun kesum (laksa leaf) and Asian basil to cater to residents and food stalls at the flats, ” she said.

Rosnah added that residents were determined to continue with their farming project, which started in 2019, despite restrictions of the ongoing movement control order.

“Today, residents take turns to maintain the community farm, unlike before when we went to the farm in groups.

“We have a daily schedule which complies with the standard operating procedure. Only four are allowed at the farm per session so our compost-making efforts and the plants are not neglected, ” she said.

“With the advice and expertise of Iskandar Puteri City Council (MBIP) and Universiti Teknologi Malaysia, the residents were able to turn an unused land into a fruitful garden of greens.

“We also rear chickens and use their droppings as fertiliser.

“The farm also brought the residents together and our community spirit is much stronger because of it.

“The community farm, which began at Block A1, has prompted residents of two other blocks — Block A2 and Block A4 — to start their own community farms, ” she said, adding that her committee was happy to assist other residents in their projects.

Residents, she said, were preparing to enter the competition again.

Meanwhile, MBIP Research and Sustainability Unit town and country planning officer Safwan Shaari said the project’s success had motivated participants and given them the confidence to realise that they were making a difference.

“In an effort to educate residents on recycling, we held a recycling drive in April and collected 757kg of items and 74 litres of used cooking oil in one day from just one block.

“Through these programmes, we learned that the lower-income households are also able to get on board green initiatives such as community farming, compost-making and recycling, ” he said.

“We are planning to expand the project to other locations such as Sunway Big Box and Mydin Mutiara Rini once the MCO is lifted.

“The bins will be placed in the respective locations for a year and the public is free to drop off their unwanted clothing and fabrics.

“For now, we are only accepting fabric materials but we hope to provide other bins so we can accept other products for recycling in future, ” he said. 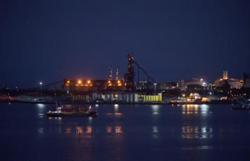