This site outside the Hindu Cemetery has been earmarked for the AD and food court.

A FOOD court and an anaerobic digestion plant (AD) project in Ampang, Selangor has been criticised by the residents and stakeholders who complained about the suitability of the location.

They voiced concerns over the proposal to build the two facilities along Jalan Kerja Ayer Lama that was near a residential area.

The AD, especially, is set to be located in front of the 60-year-old Ampang/Ulu Kelang Hindu Cemetery.

The RM4.56mil project, currently in the initial stages of construction, is by Ampang Jaya Municipal Council (MPAJ) in collaboration with Housing and Local Government Ministry (KPKT).

The AD, which is to recycle organic matter like food scraps into biogas and fertiliser, is expected to process one tonne of food waste a day.

However, now it is almost directly opposite the condominium, and this time it will also have a food court, among other facilities.

Former condominium joint management body chairman Shahrul Munir Ibrahim said the new site was not an improvement as concerns remained over the project.

“The AD project and food court will bring in more traffic into this area, but there are no plans to widen the road or put in additional infrastructure.

“Jalan Kerja Ayer Lama is always jammed during peak hours as it is a main road into this area.

“These facilities will further aggravate the massive traffic congestion, especially with rubbish trucks plying to and from the site,” he added.

Shahrul proposed that the nearby Bunga Tanjung food court be rebuilt into a multistorey facility that would also house the AD.

“The food court is only 1km away from the new site and has more stalls, where the food waste could easily be used in the digester,” he said, adding that there had been no prior consultation with local residents about the project.

“There are industrial zones within Ampang Jaya where the digester will be better suited.

“Why was there a need to place the AD here to disrupt the functioning of the cemetery,” he said, highlighting that the cemetery was the only burial ground available for the community in Ampang.

“There have been more than 600 internments since the cemetery was located here in 1960, and it is still being used and maintained,” he said.

Balagurunathan, who is also a former MPAJ councillor, said it would be more suitable to either rebuild the traders’ lots at the current location in Lorong Kerja Ayer Lama or relocate them to the Bunga Tanjung food court instead.

S. Chandran, 41, who has taken on the duties of cemetery caretaker since the passing of his father I. Sivaprakasam in May, hoped there would be space allocated for visitors and for rituals to be conducted.

“My father, who has been the caretaker here for the past 40 years, was disheartened to hear of this.

“It would have been better if they had beautified the area with landscaping instead of having the AD here,” he said.

MPAJ press relations officer Norhayati Ahmad said when the local council held a coordination meeting for the development of the food court and plant on July 7 last year, it was attended by the affected parties.

She said they did not object to the project and agreed that the parking facilities be shared.

Norhayati said the new location was a strategic one as it was not close to residential buildings and was adjacent to the upcoming food court where the food waste could go directly to the AD.

“However, there were protests from residents due to the proximity of the AD next to the residential complex.

“It was then decided to relocate the project to Jalan Kerja Ayer Lama, adjacent to the Ampang Hindu Cemetery,” she said in a statement.

She said the AD would only take up 22% of the 0.15ha land, and MPAJ would retain the carpark as well as include more landscaping.

“The carpark can be used by those visiting the cemetery and the food court.”

Norhayati said the land the project was being built on belonged to the government, and it was in the process of being gazetted as a public facility.

In April, StarMetro reported that Housing and Local Government Minister Datuk Zuraida Kamaruddin announced the relocation of food traders at Lorong Kerja Ayer Lama to the new premises less than 200m away.

During a site visit, Zuraida, who is also Ampang MP, said the project was expected to be completed by January next year.

The new food court will have 17 stalls and two kiosks, as well as toilet, nursing room, surau and parking space.

MPAJ president Mohd Fauzi Mohd Yatim said the biogas produced by the digester would be used to generate electricity and the fertiliser used for plants.

The machine will be provided by the Solid Waste Management and Public Cleansing Corporation, and managed by MPAJ, he said.

MPAJ had said that the AD plant was one way of tackling excessive food waste by processing it into compost and biogas instead of letting it fill up landfills. This site outside the Hindu Cemetery has been earmarked for the AD and food court.

An aerial view of the site of the new food court (left, behind blue hoarding) in Jalan Kerja Ayer Lama in Ampang. On the right is the Ampang/Ulu Kelang Hindu Cemetery where the plant will be located. — Photos: LOW LAY PHON/The Star

An artist impression of the AD in Jalan Kerja Ayer Lama and the carpark which MPAJ says can also be used by visitors to the Hindu cemetery.

Balagurunathan fears the AD will disrupt activities at the cemetery.

Traders at these food stalls along Lorong Kerja Ayer Lama in Ampang (foreground) will be relocated to the new food court being built just 200m away. Photos: LOW LAY PHON/The Star 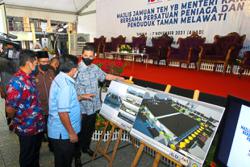