Over 1,000 traders to get rental exemption in Ipoh

Dato’ Sagor food court is one of the places to enjoy rental waiver offered by MBI.

TRADERS at Ipoh Central Market as well as those at food courts managed by Ipoh City Council (MBI) are exempted from paying rent this month.

He said the exemption would benefit more than 1,000 traders.

“The city council will also continue its ‘caring agenda’ programme to help the needy, ” he said during a full board meeting.

In giving an update on the Kinta Riverwalk development initiative, Rumaizi said the project was a continuation of the Ipoh Heritage Trail that was previously developed by the city council.

He highlighted that the project to upgrade the riverfront as well as beautify the place would complement planning of the old town tourism area based on the Special Area Plan study (Tin Mining Heritage City) and Ipoh Local Plan.

“The riverfront project is divided into three locations.

“The first one is in front of Kinta Riverfront Hotel from Jalan Raja Musa Aziz bridge to Jalan Lim Bo Seng bridge, a distance of 1.6km, with RM3mil fund allocated by the Northern Corridor Implementation Authority (NCIA).

“The second location is near Hadramout Restaurant, which is from Lim Bo Seng bridge to Jalan Sultan Idris Shah bridge (195m), and a sum of RM500,000 has been allocated by the state government.

“The third location is close to the Old Town area, beginning from Jalan Sultan Idris Shah to Lorong Hale, stretching 280m. An allocation of RM500,000 was provided by Housing and Local Government Ministry, ” he elaborated.

Rumaizi said upgrading works were completed in front of the hotel while the project near the restaurant would be finished this month.

He said the project near Ipoh Old Town would start in July and was expected to be completed by December.

“In addition, we hope to create new business opportunities for small traders as well as generate more income for existing traders in the area, ” said Rumaizi. 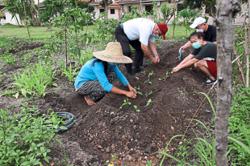