FEDERAL Territories Ministry has embarked on a massive tree-planting exercise that will see 900,000 trees being planted in Kuala Lumpur and Putrajaya in the next four years.

Minister Tan Sri Annuar Musa said the initiative, to be carried out in phases starting this year, was in line with the campaign launched by Prime Minister Tan Sri Muhyiddin Yassin to plant 100 million trees in Malaysia within the same period.

He added that the 100 trees planted near the Batu water retention pond in Sentul was the first batch of the project carried out by Kuala Lumpur City Hall (DBKL) and Putrajaya Corporation.

“The early stages of implementation will focus on seven lakes and ponds located in the northern part of Kuala Lumpur.

“The planting of trees in these areas is part of a plan to turn the water bodies into recreational spots, ” he said. 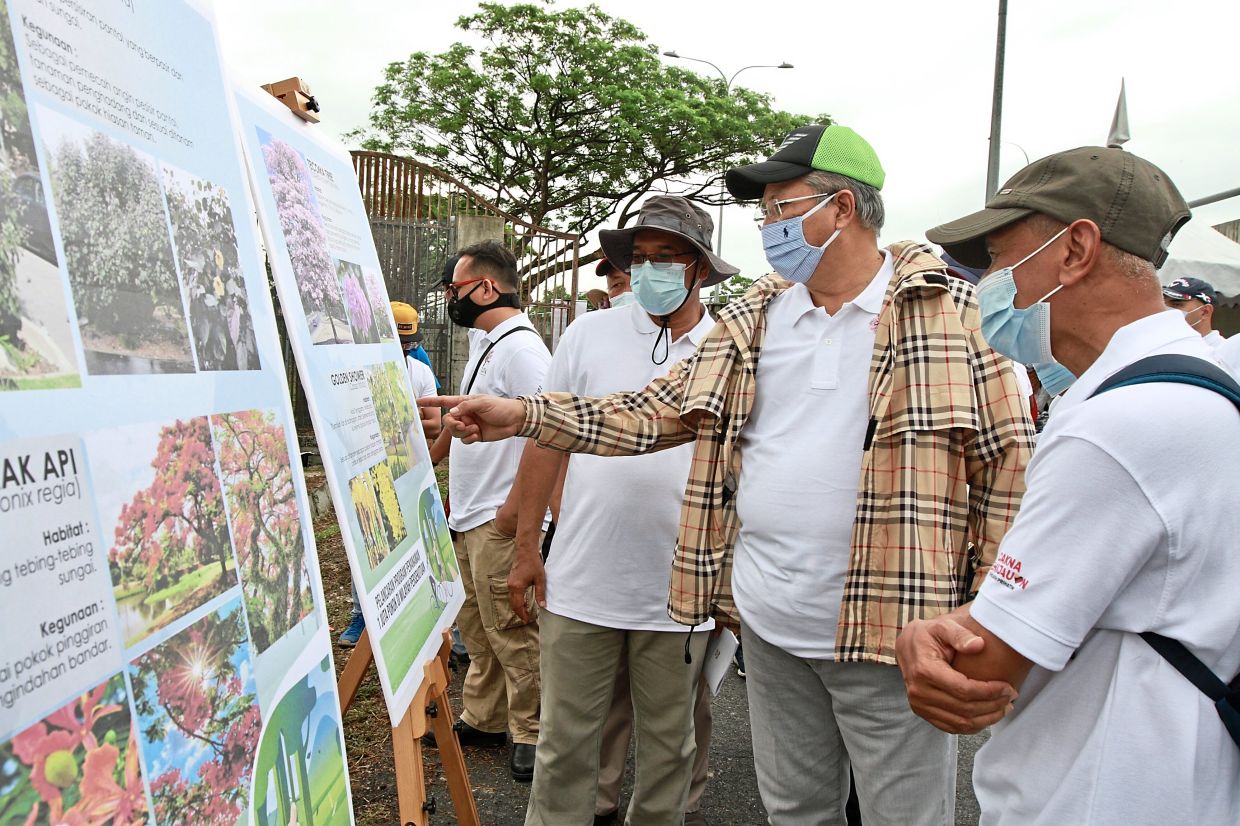 Annuar (second from right) looking at the information board about the tree-planting exercise during the launch of the programme.

Annuar added that greenery in the city were crucial in maintaining a balanced ecosystem and ensuring the preservation of biodiversity.

The initiative, he said, would produce 117 tonnes of oxygen a year while reducing carbon dioxide by 22 tonnes.

He elaborated that the ministry would identify more species of trees suitable for the city’s climate, with priority given to native species.

Annuar urged stakeholders, including city folk, to cooperate to ensure the success of the initiative, while reminding them not to damage or cut down the planted trees.

“It takes more than 20 years for trees to grow to their mature size.

“If they are cut down, we have to replant new trees and wait for another 20 years to achieve a similar effect.

“These trees are a valuable investment for our future, ” he said after launching the programme at Metropolitan Batu Park in Sentul, Kuala Lumpur.

Annuar said DBKL had been reminded to inform its contractors to be more mindful and not simply cut down trees.

“It is hoped that this initiative will make Kuala Lumpur a greener and more environmental-friendly city, ” he said.

At a separate event later at the River of Life (ROL) waterfront at Jalan Leboh Pasar Besar, Annuar announced that the Ejen Ali cartoon character had been chosen as the project’s icon.

The figurine would be placed there to attract more people to learn more about ROL.

Initiated in 2011, the RM4.4bil project is aimed at cleaning and beautifying Sungai Klang and Sungai Gombak, including six tributaries in the Greater Kuala Lumpur and Klang Valley region.