Lew handing over angpow to a Buddhist monk at a monastery in Alor Setar during Chinese New Year. — Photo from Lew’s Facebook page.

LET not even one child be left without education nor even one soul go hungry.

This is the aspiration of Muslim preacher Ebit Irawan Ibrahim Lew, better known as Ebit Lew.

The 37-year-old is not only a successful entrepreneur but also a philanthropist and an ustaz with millions of followers on social media.

Speaking to The Star in an exclusive interview, Lew said he started doing charity work when he was still at school.

“When I was 12, I followed my teachers who reached out to the underprivileged communities in Pahang, especially Orang Asli.”

Lew shared that during his university days, he often spent his money to feed the needy at a mosque.

He once gave the baju Melayu he was wearing to a man and went home in his singlet.

He said his habit of helping others continued even during his work as a motivator with Datuk Dr Mohd Fadzilah Kamsah, when he spent his holidays at remote villages just to help out.

The Universiti Putra Malaysia alumnus is married with children.

He is much influenced by his teacher Mohd Nor Jaafar, whom he followed to do charity work.

“My teacher used to tell me about the compassion of Prophet Muhammad and every time, I would cry.”

On how he accumulated the funds he gave to the poor, Lew said apart from his own money earned through his businesses,he received donations from the public through his non-governmental organisation, Pertubuhan Kasih Umat Malaysia.

The soft-spoken preacher never failed to state his gratitude to Allah during the interview, saying that his charity work was its own reward.

“If we bring smiles to others, that is joy in itself.

“I am happy to share what I have because of Allah.

“No matter what people say, we have to carry on with our work. We have to walk the talk.

“Even right now as we are talking, there are people out there who are hungry and homeless,” he said.

Lew believes what he does now can unite people regardless of race or religion.

He strives to show that the prayers of the poor will be answered no matter what religion they follow.

“We will always have our differences but the Prophet advises us to throw away bigoted feelings.”

Lew plans to focus on providing tablets and Internet connectivity to poor children,

His team is also working with the authorities to build hotels for vagrants and people from rural areas who visit relatives warded at hospitals in Kuala Lumpur. Lew handing over angpow to a Buddhist monk at a monastery in Alor Setar during Chinese New Year. — Photo from Lew’s Facebook page. 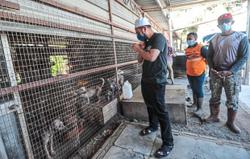