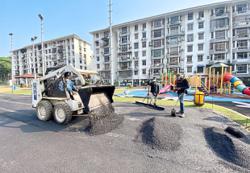 The recently upgraded playground at Jalan 13/38A in Taman Sri Sinar has a new jogging track.

Despite being a high-density area, the bus route to this area has been terminated since March due to lack of passengers.

Segambut MP Hannah Yeoh said residents stopped commuting by bus during the movement control order period. Prior to this, residents, especially the elderly from this area, relied on the public bus service by Bas Selangor.

“The bus number T121 used to pass this area and head to the Kepong market and Aeon Kepong.

“From Aeon Kepong they connect to other areas. This bus service made it easier for them to do their shopping.

“However due to lack of passengers, the service was stopped but now residents are requesting for the service again, ” said Yeoh, adding that she had written to the Land Public Transport Agency on this matter.

She highlighted that the B40 group wanted this service to be available as other options such as taxis are expensive.

“I suggest a different bus operator take over this route if Bas Selangor is unable to do so. The service could be provided during peak hours in the morning and evening.

“The government could provide subsidy to operators who are keen to take this route. Subsidies were given previously but there were some inconsistencies which must be addressed, ” said Yeoh.

As for the playground upgrade work at Jalan 13/38A, Taman Sri Sinar, she thanked Kuala Lumpur City Hall’s landscape department for a job well done.

She said the residents could now enjoy the facilities such as a jogging track and railing installed for the convenience of the elderly at some parts of the park.

She added residents had also requested for a refurbished outdoor gym and reflexology paths, and hoped these would be made available soon.