Thomas: The bridge near the MAB building is too close to its hostels and affects residents’ privacy.

SIGNALISED pedestrian crossings would be welcomed by the visually impaired community in Brickfields, Kuala Lumpur, instead of overhead bridges.

Malaysian Association for the Blind (MAB) chief executive officer George Thomas said such a facility would enable them to cross the road safely.

“Many people prefer to cross the road below the bridges as it is a short distance and they do not have to exert too much energy.

“The bridge near the MAB building is also too close to our hostels and affects the residents’ privacy, ” he added.

Residents and stakeholders said the bridges no longer served their purpose.

“Keeping the tactile pathways clear of obstructions and ensuring that the sound indicators are regularly maintained will go a long way towards improving the mobility of the visually impaired in Brickfields, ” he reiterated.

It is understood that DBKL will bring the matter up with the one-stop centre (OSC) committee.

Brickfields Rukun Tetangga chairman SKK Naidu hoped that the proposal would be approved by the OSC committee.

“We have been requesting that the bridges be removed for many years now. 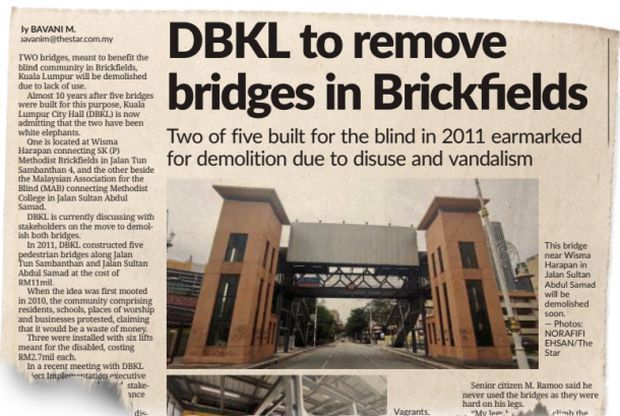 “The one beside the MAB building in particular is blocking the walking path, which impedes the movement of people.

“There have even been cases of people throwing rubbish into the MAB building compound from the overhead bridge, ” he said.

“A covered walkway will encourage more people to walk and help to reduce traffic congestion, ” he said.

In 2011, DBKL constructed five pedestrian bridges along Jalan Tun Sambanthan and Jalan Sultan Abdul Samad at a cost of RM11mil.

When the idea was first mooted in 2010, the community comprising residents, schools, places of worship and businesses protested, claiming that it would be a waste of money.

Three were installed with six lifts meant for the disabled, costing RM2.7mil each.

Shortly after the bridges were built, it became clear that not many were using them.

It did not take long for vandals to strike.

The guardrails went missing and the lift cables were stolen, making the bridges dangerous to use.

Graffiti was scrawled all over as well.

To make matters worse, the bridges were taken over by vagrants and drug addicts who made the space their sleeping area.

In July 2013, then Kuala Lumpur mayor Datuk Ahmad Phesal Talib ordered the installation of closed- circuit television cameras on the bridges that would be linked to the police headquarters to deter thieves and vandals from damaging the facilities.

The move, however, failed to convince people, including the visually impaired, to use the bridges. 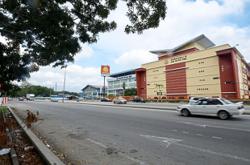 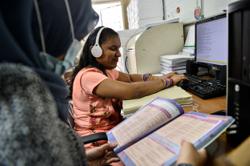