Safe to patronise: Most restaurants along Jalan Kasah are expected to fully reopen by early December.— GRACE CHEN/The Star

IT WAS not clear whether the diner sitting at a table by the window was meeting his date for the first time. But he showed up early to choose a spot at the restaurant and had stepped outside to look at passing cars in anticipation of the person’s arrival.

The Mont Kiara resident chose the Vintry branch at Jalan Kasah in Medan Damansara as it had a quieter and more intimate setting. Sanitisation was carried out along five-foot ways and roads in Jalan Kasah and Plaza Damansara (pic, below) by Kuala Lumpur City Hall following the discovery of the Kasah and Damanlela Construction Site clusters. — Photos from Bukit Damansara House Owners’ Association Facebook page

Its manager Kay Chong made sure he was provided good service.

It was assumed all went well as the diner and his guest seemed comfortable enough to stay until late.

This was despite it being the first day of the restaurant’s reopening after the management shut its doors following two staff members testing positive for Covid-19 on Nov 18.

The Health Ministry announced the emergence of the Kasah Cluster after 19 people from a security company tested positive.

Following this, the ministry identified about 30 residences used as hostels for migrant workers in Medan Damansara and ran tests on the residents. Ten other hostels were also identified in the vicinity of Jalan Setiajasa. When the ministry announced 51 cases in this cluster, the two restaurant workers who were staying at one of the hostels had their worst fears come true.

“I was the first to receive the news, ” recalled Vintry owner Wong Yin-How.

Two other restaurants located on the same road were also closed and the staff were told to quarantine at home while the management conducted an internal audit on those who had come in close contact with the positive cases.

Describing the two staff members as dependable workers, Wong said they were given full salary during their ordeal.

One employee had just moved back into the hostel and was told to rest and isolate until Saturday while the other returned home yesterday.

“We have checked and reconfirmed with doctors that they are no longer infectious, ” said Wong.

Restaurants along the same road are set to reopen early December with all their staff undergoing similar tests.

Association vice-president Ravi Markandu said news of the businesses along Jalan Kasah reopening for business was good, especially for those living nearby.

To support efforts by businesses in the area to ensure patrons were exposed to minimal risks, Ravi said the association were ensuring that hostels for security guards working at guarded communities in the Bukit Damansara residential areas were well-managed.

Under the BDHOA umbrella, there are 16 security schemes that employ 60 Nepalese security guards. The men occupy three houses in the Jalan Setiajasa area.

“The foreign worker community arrived here about 10 years ago and stay at rented link houses in Jalan Kasah and Jalan Setiajasa. There would be about 25 occupants per house.

“To date, of the estimated 400 houses in the area, 20 have been turned into migrant workers’ hostels.

“In the Setiajasa area, nine houses have been rented out for that purpose, ” said Ravi, adding that each house accommodated between eight and 25 residents.

When the movement control order was announced in March, the association made it a requirement for the security company employing the guards to set up a system in its workers’ hostels to ensure their movements would be kept to a minimum, namely travelling to work and back to the hostel.

Ravi said a warden was elected for each house and anyone who wanted to go out had to have a good reason.

“To ensure they did not make unnecessary trips to supermarkets, a mobile grocery truck was sent to the hostels.

“As they were Nepalese, we made sure the grocery trucks had what they would like such as lentils and atta flour.

“We wanted to stop the virus from spreading. It would have been a total catastrophe if it had, ” he said. Nearby residents are happy that businesses along Jalan Kasah are gradually reopening. — Photo: GRACE CHEN/The Star

Ravi added that the guards understood the reason for their curtailed movement and had abided by the rules.

Nepalese security guard Rudra Bahadulkadri, who returned from a 70-day holiday in Butwal, Nepal, just before the MCO was announced in March, was happy with the rules because it kept everyone safe.

“I have two daughters, 18 and 14. The youngest is the top in her class while my eldest is in her second year at university.

“My goal is to ensure I am able to send money back for their education.

“I want them to have a good future, ” said Rudra, who kept fit by exercising indoors, including lifting weights.

The guards also take traditional medicine and supplements such as turmeric powder and neem leaves to boost their immune system.

Beside it is the Damansara City Mall (DC Mall), which has seen reduced footfall due to the Covid-19 scare.

On Oct 16, one of its tenants, a fertility clinic, reported that a patient’s husband had tested positive for Covid-19.

He had accompanied his wife on her visits there. At the Commonwealth Club in Bukit Damansara, sofa cushions are sprayed with disinfectant and overturned after a guest leaves.

The mall shut its doors for a day for cleaning and sanitisation, and the clinic staff were ordered to be quarantined and tested.

“It is hoped that when the conditional MCO is lifted on Dec 6, business will improve.

“We remain open. There is less crowd but the eateries are still popular with diners, especially in the evenings, ” he said.

To keep visitors safe, Lim said a team of cleaners were deployed every two to three hours to sanitise escalator belts, public toilets, and lift buttons, among others.

“Disinfection is also carried out daily after closing hours, ” he added.

Lim said the mall had also ensured that its staff, tenants and their workers underwent swab tests, and that a few hundred people were tested.

As someone who has to travel between Penang and Kuala Lumpur for work, Lim has been swabbed twice himself. 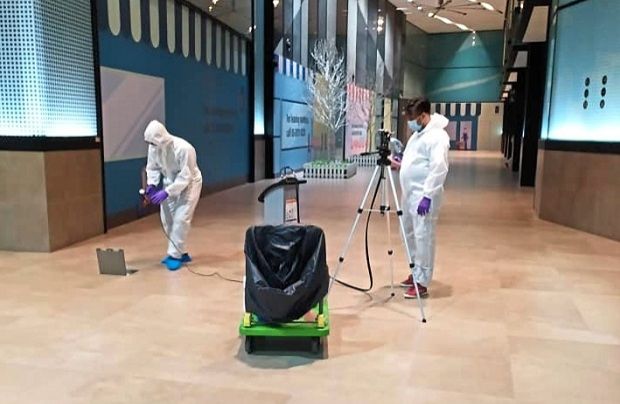 To keep visitors safe at DC Mall, a team of cleaners are deployed every two to three hours to sanitise escalator belts, public toilets and lift buttons.

WCT Bhd is the main contractor for a construction site in Jalan Damanlela.

On Nov 7, it stopped all work to clean and sanitise the site, while 1,861 workers were immediately transferred to quarantine centres.

Operations at the site resumed in stages starting Nov 14 with a new team of workers who tested negative.

In a statement, WCT said: “Since the beginning of the pandemic, we have been implementing safety and preventive measures to curb the infection.

“This includes daily screening procedures, mandatory use of face masks inside the premises and project site, frequent hand washing and social distancing.”

As an added precautionary measure, rapid tests would be carried out fortnightly on all workers including those under subcontract, said WCT.

Apart from the daily sanitisation, housekeeping and maintenance, architecture and structural works at the project site have also resumed.

Regular preventive measures to mitigate the risk of dengue are also conducted.

WCT will also refurbish its workers’ quarters according to the latest employees’ minimum standards of housing, accommodations and amenities set by the Federal Government.

The company will also provide support to staff and workers to ensure their physical and psychological well-being.

“It is essential for the workers and their supervisors to remain positive at all times as they ride through the pandemic together as a team, ” the statement said.