JOHOR BARU: Determined not to let the school year go to waste due to the Covid-19 pandemic, Universiti Teknologi Malaysia (UTM) has organised a fully-virtual drone competition for secondary school students.

UTM sports innovation and technology centre senior lecturer Dr Jaysuman Pusppanathan said the Education Ministry initially approached the higher learning institution for ideas during the movement control order (MCO) as all co-curricular activities in schools had to be cancelled.

“Without co-curricular activities, students, especially those from Form Five, would have lesser opportunities to obtain certificates useful to them when applying to further their studies.

“I got the idea for an online drone competition after spending some time at home with my seven-year-old, teaching him to fly drones in a safe and controlled environment.

“I noticed that children these days are quick learners, especially in matters related to technology and programming, which led me to come up with a drone competition for students in Johor, that is both fun and educational.

“The idea was well received by the ministry and it wanted to expand the competition to other states to make it a national-level competition.

“So, what started out with a target of 500 students in Johor, quickly received overwhelming support of about 3,000 participations from secondary schools all over Malaysia, ” he told StarMetro in an interview at the UTM campus in Skudai here.

He added that the competition also gained the interest of Iskandar Investment Berhad and Malaysia Digital Economy Corporation (MDEC) which came on as strategic collaborators, as well as other private companies as sponsors.

The competition, called Drone Edu Challenge IR4.0, kicked off in August with a preliminary round where the participants were required to attend 12 lecture modules online via a video streaming site.

The video lectures were prepared by the competition’s 27-strong committee, including lecturers specialising in mechanical engineering, education, engineering, programming, security and so on.

“The theory and technical contents were aimed at equipping the students with the required knowledge before they can safely design and fly their drones.

“A total of 30 participants were shortlisted, where each received a drone kit worth about RM800, and they were required to come up with solutions to solve a problem posed by our panel.

“We were amazed by the submissions as the students exceeded our expectations and showed great potential in programming their drones to overcome obstacles.

“There was also one entry where the student and his teachers built prop trees and hills to demonstrate the drone’s movements, ” he said.

The final winner of the competition would be announced on social media on Oct 31, he said, adding that those not shortlisted were not left out as the organisers also held a series of quizzes and lucky draws for them.

Jaysuman, who is also the Johor Baru Southern Drone Club president, added that he was glad that UTM could inject the element of Science, Technology, Engineering and Mathematics (STEM) subjects into the competition to get the schools involved.

He said the exposure would benefit the students who were interested in pursuing a career in the related fields.

“Drone technology and artificial intelligence is everywhere now, and we can see them being used in various industries ranging from agriculture to sports.

“We hope to open the students and teachers’ eyes to the reality that with knowledge and skills in this area, they can penetrate any job field they want in the future, ” said Jaysuman. 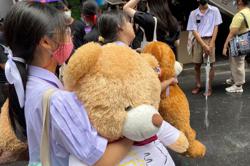 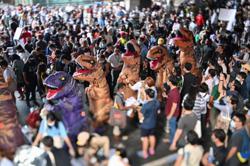