Pahang also boasts island and beach tourism with world-class destinations such as Cherating Beach in Kuantan.

KUANTAN: The East Coast Economic Region Development Council (ECERDC) and the Pahang government will focus on developing strategic economic sectors such as tourism and manufacturing to stimulate economic growth in the state post-pandemic.

The ECERDC said this was crucial as both sectors had been affected by the Covid-19 pandemic.

“Among projects undertaken by ECERDC in support of tourism in Pahang include upgrading works of key tourism facilities, as well as conservation and preservation programmes at some of the most popular and important tourism destinations in the state.

“This will ensure that these attractions remain attractive and sustainable in the long term, ” the council said in a statement.

Among them were reforestation programmes, upgrading the water quality monitoring stations and creating lotus nurseries in Tasik Chini to replenish the lotus population in the area.

“Another destination is Taman Negeri Rompin, one of the oldest rainforests.

“Pahang also boasts island and beach tourism with world-class destinations such as Tioman Island and Cherating Beach which is a popular nesting spot for green turtles and giant leatherbacks from May to September.

“Here, ECERDC proposes to upgrade the Turtle Conservation and Information Centre as a tourism attraction, which will also create awareness on the importance of conservation, ” it said.

As for urban tourism, ECERDC said the Kuantan Waterfront was a bustling tourist destination with its iconic landmark, the Kuantan 188 tower being a central tourist attraction in the state capital.

Other destinations recently completed by ECERDC in Pahang include the Kuala Gandah Elephant Conservation Centre and Temerloh Titik Tengah Semenanjung.

Meanwhile, ECERDC said manufacturing remains a key contributor of private investment and an important economic driver in Pahang despite the setbacks caused by the pandemic.

“The state’s established ecosystems, resources and infrastructure makes it a competitive manufacturing destination.

“And the Gebeng Investment One-Stop Centre has been established to enable speedy approvals of investment in Pahang, ” it added.

Among the infrastructure projects is the construction of a water pipeline from Kemaman in Terengganu to Gebeng that will begin in June 2021 and which is expected to further increase Gebeng’s appeal among investors.

ECERDC said another plus point was the geographical advantages of Kuantan Port ---the ideal gateway to Asean and Asia-Pacific markets — which would further spur international trade as well as investments into the state.

ECERDC chief executive officer Baidzawi Che Mat said it was crucial for socio-economic development in Pahang to be accelerated post-pandemic for the sake of the people’s well-being.

“This includes enhancing the tourism sector with strategic infrastructure works.

“High-impact projects such as the Kuantan Port City development will spur domestic economic activity and private investments in the state.

“This will bring about direct socio-economic benefits for the rakyat through increased jobs and entrepreneurial opportunities, ” he said.

Out of the RM31bil investment target for Pahang under the ECER Master Plan 2.0 from 2018 to 2025, Pahang had attracted RM9.38bil in committed investment from 40 projects which would create more than 8,300 jobs and 760 entrepreneurial opportunities, said ECERDC.

Starting September, the council began upskilling 1,500 unemployed youths and those retrenched because of the Covid-19 pandemic. 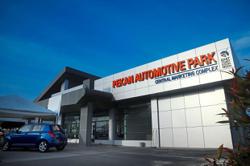