Healing power of music in the city Delfino serenading the crowd during the Swinging Sixy Concert which is part of the Jazz on the Jetty series. Accompanying her is the WVC Trio comprising Tay (left), bassist AJ Popshuvit (background, middle) and drummer Adriel Wong.

THE Jazz on the Jetty concerts brought live music back to historic George Town and audiophiles in Penang savoured every melodious moment.

The soulful voices of Junji Delfino and Janet Lee, accompanied by music from the WVC Trio and narrations of Gareth Richards, proved a treat.

All three nights of the Jazz on the Jetty series were sold out.

About 70 guests attended each of the shows.

They were all held at the Jetty 35 performance space located along Weld Quay.

Richards, who is a director of Impress Creative and Editorial which co-organised the event with the WVC Malaysian Jazz Ensemble, was pleased with the turnout.

The venue normally accommodates 150 people, but capacity had to be halved for the concerts in adherence with current health protocol.

“People find comfort and stimulation in the arts. In times of crisis, it keeps us sane, lights the dark, ensures we stay human and shows that there is life still, ” shared Richards.

“For months, millions have watched concerts, plays and films online.

“They didn’t have a chance to watch performances live.

“Virtual consumption of the arts does not offer the same quality of experience as live shows.

‘You cannot duplicate the energy, emotion and ebullience of a live performance.”

‘Swinging Sixty’ was the theme of the opening night.

It saw the WVC Trio and Delfino playing tunes like ‘Where Do You Start?’ which is a song about losing someone dear and moving on.

Delfino felt the song was poignant in light of the Covid-19 pandemic.

The Kuala Lumpur-based ‘jazz mamma’ also performed ‘Little Things’ which was composed by her eldest son and ‘Try to Remember’ that reminded the audience to stay positive and hold on to what they have in these uncertain times.

Delfino, who turned 60 in July, said, “I’m extremely grateful to be able to perform before a live audience again.

“During the early days of the MCO, performers like me had to resort to live streaming from home to keep our music going.

“Music is our life and it is extremely difficult to have it taken away from you.

“While we did have our virtual audiences, the hearts and thumbs up emojis just cannot replace actual human interaction.

“Not many people recognise the power that music hold.

“It can uplift the wounded spirit or incite deep turmoil.

“I chose songs that uplift and give us hope.”

On the second night, Janet Lee took the microphone for ‘Life is a Cabaret’.

It was her first full recital outside Kuala Lumpur since the MCO started.

Her repertoire included ‘Samba Penang’ which is a Malay oldie revamped into a merry sing-along and a lively samba rendition of ‘Que Sera Sera’.

She also performed ‘Restless Heart’ which is an original by WVC composer and band leader Tay Cher Siang and herself.

“I felt the love and support from the generous Penang audience tonight, ” said Lee.

“It energises and inspires me to carry on with my music and do more live shows.

“The bond between performers and the audience has been greatly strengthened following the challenges brought on by the pandemic, ” Lee opined.

talents of the WVC Trio, Delfino, Lee and Richards.

Tay was also pleased to perform to a live audience, describing the connection with the audience as something magical.

He said, “Live music is a communal activity.

“We all sense that feeling of humility and empathy when we perform to a real audience.

“Music has long given people emotional support. It’s even more important now with the challenges we face.”

“The pandemic might have curtailed our sense of community.

“We could not do simple things like like seeing each other face to face or have meals together.

“With live music back, we are bonding again and we can heal.”

Richards summed up the concert experience by highlighting the impact of the pandemic on performers.

“The consequences will be with us for a very long time including the effect on many people’s livelihoods.

“Performing artists are among the most acutely affected. They are in survival mode.

“It’s vital to make live shows possible because this offers a lifeline to performers.” 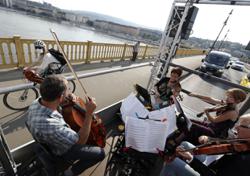