Madam Cho’s house was splashed with red paint on Sept 10. She believes the incident is linked to her son not settling his debts with loan sharks.

MADAM Cho (not her real name) believes her son’s online gambling addiction has driven him to borrow cash from illegal moneylenders.

On Sept 10, the senior citizen’s house in Section 19, Petaling Jaya, was splashed with red paint at about 9pm.

The incident was then reported to the police.

It is believed that Cho’s son had once again borrowed money from loan sharks.

“Our CCTV camera could not catch the perpetrator who came in a car and splashed red paint over my car parked at the porch.

“The paint also splashed over our house wall. I scrubbed the paint so hard that I still have stains of the paint on my legs and fingers.

In the past, Cho had helped to settle her son’s RM50,000 debt. Now she no longer wants to be associated with her 40-year-old son as she herself has been harassed by the loan sharks.

“My son does not live with me and I hope the Ah Long will stop contacting me to settle his debt.

“I urge those who lent him money to look for him for repayment and not his family members.

“We will no longer help him, ” said the teary-eyed senior citizen during a press conference at the Bandar Utama DAP office.

“I want the moneylenders to stop harassing me and my other three kids. We will no longer repay his debts, ” added Cho.

She said her son was single and ran a coffee shop financed by his sister. However, the business was closed down during the movement control order period.

Cho also appealed to the authorities to eradicate the online gambling menace as it was causing a lot of problems for families.

“His siblings have helped him a lot but it is of no use. We also have no information on his whereabouts, ” she added. 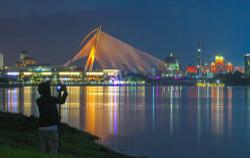