Redevelopment on the horizon

One of the sinking houses in Bukit Assek.

SIBU: Residents in Bukit Assek slum area are finally seeing some movement on plans to turn the area around, as discussions have started.

He said 35 people from the community, government departments and agencies, local authority, property developers and business community participated in the meeting on how to implement Bukit Assek Redevelopment Plan.

“We have been talking about this for many years and now the state government has finally stepped in by appointing LCDA to conduct a study on developing this area which sits on peat soil,” he said at a press conference.

The development plan for this triangular area, which covers Jalan Tiong Hua, Jalan Bukit Assek, Jalan Hua Khiew, Jalan Tong Sang and Belian Lane, will change the face of the town when completed, he said.

“This development is not only for the residents in the area but also for the town as a whole.

“It is a huge site of between 202ha and 243ha and in prime area, as it is near the central business district.

“This will also give Sibu a facelift when implemented,” he added.

Most of the houses in dilapidated condition now were built in the 1950s, when the area was a major settlement akin to a town.

“As it sits on peat swamp land, most of the houses are either collapsing or sinking.

“The drains are sinking too and very hard to maintain.

“Whenever there is heavy rain, the area will be waterlogged and turn into a potential mosquito breeding ground,” said Chieng.

He noted that the situation was getting from bad to worse and a redevelopment plan was warranted.

“The Chief Minister has instructed LCDA to conduct a detailed study, after visiting the area.

“I believe LCDA will hold more discussions leading to the implementation of the redevelopment plan,” he said.

Among the agenda in the plan were to retain the commercial area in Jalan Tong Sang and Medan Mall while new sewerage and drainage systems are built.

The Jalan Oya Polyclinic will also have to be rebuilt to accommodate the increase in population.

“We will have to think about compensating and resettling the people when their old houses are demolished,” added Chieng. 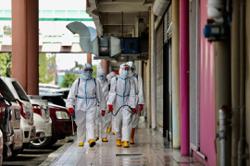