Two local business owners from Jalan Tiong, off Jalan Ipoh speaking to reporters about the frequent flooding due to the MRT project down the road. — Photo: SIN CHEW

TWO motor pumps were donated by Batu MP Prabakaran Parameswaran to business owners and residents along Jalan Tiong, off Jalan Ipoh in Kuala Lumpur, to mitigate flooding in the area.

“Jalan Ipoh is a red zone for flooding, with floods occurring about three or four times a week, resulting in massive traffic jams as cars are unable to pass the flooded roads, ” said Prabakaran.

He added that his office had been working with Kuala Lumpur City Hall (DBKL) to combat frequent flash floods in those areas, and a new drain offered relief to residents in Taman Kaya, Taman Bullion and PPR Batu Muda.

“However, the situation at Jalan Tiong has worsened, with no action taken by DBKL over the past two years. Jalan Tiong and its surrounding streets are a low-lying area compared to the rest of Jalan Ipoh, ” said Prabakaran.

He said the two motor pumps, costing RM8,000, would be operated by flood squad volunteers from the Batu MP office to help residents pump out flood waters.

He emphasised that the pumps were a temporary solution.

He urged the government to form a special committee to address flooding in red zone areas.

A stationery shop owner, who wished to be known only as Wong, said his shop’s metal grilles and display racks had been damaged badly by the frequent flooding and had been replaced many times.

“My employees and I spend hours removing mud and rubbish each time after a flood, ” he lamented.

A hawker in Jalan Tiong, who identified himself only as Lam, said his livelihood was affected as he could not open his stall most days of the week. 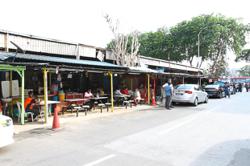