MANGOES from Pakistan, dubbed the “king of fruits” in the South Asian region, are now available for sale at selected supermarkets and Pakistani restaurants in Peninsular Malaysia.

“Each mango species has its own qualities in terms of taste and fragrance, ” said Choices Simplified executive director Syed Haroon Ali, adding that Pakistani mangoes are mostly grown in the Punjab and Sindh provinces.

“The Chaunsa and Baganapalli varieties are the most popular among Malaysians.

“Baganapalli mangoes are very sweet, non-fibrous and have a long shelf life. They can last about two weeks from farm to supermarket, compared to an average mango that can last about one week.”

Choices Simplified brought a selection of Pakistani mangoes for shoppers to try at the launch of the Pakistan Mango Festival at Plaza City One, Kuala Lumpur.

Malaysia-Pakistan Business Council (Malpak) chairman Datuk Seri Mohamed Nazir Meraslam said the festival was aimed at promoting and strengthening the presence of Pakistani products that are available in Malaysia.

“We are lucky that despite the limited number of flights available, we can still enjoy Pakistani mangoes here in Malaysia.”

“We hope to increase that figure next year. Malaysia imports about 53,000 metric tonnes of mangoes per annum, of which only 353 metric tonnes or 0.65% comes from Pakistan.

“With Malpak’s cooperation, we hope to hit 3% of Malaysia’s import market share next year, ” he said.

In an earlier presentation, Shafqat said according to the Food and Agriculture Organisation of the United Nations, Pakistan ranked sixth in the world in terms of production of mangoes and fifth in terms of global export.

“There are about 1,300 known varieties of mangoes worldwide, of which 120 are available in Pakistan, ” he said.

“Mangoes are believed to be one of the oldest fruits in the world as its history dates back to 2000 BC. It gained popularity during the Mughal Empire period.”

Malpak secretary Mohamed Rafiq Fazaldin said most of the mangoes from Pakistan were exported to Europe and the Middle-East, while Malaysia represented a very small market.

He attributed the 12% increase in import this year to the fact that Malpak has been active in promoting Pakistani mangoes to Malaysians.

“We’ve been having the festival for the past five years or so. This year we started working with Mydin, which has given us an avenue to distribute and promote Pakistani mangoes not only in the Klang Valley, but also Penang and Johor, ” said Mohamed Rafiq.

“Malaysians are good fruit eaters and they like mangoes, so we will continue working on promoting and creating awareness of the different varieties and qualities of Pakistani mangoes to them.”

On why mangoes are called “king of fruits” in Pakistan, he said it was because the country’s natural climate conditions produced the best quality version of that produce.

Mohamed Rafiq added that the Pakistani mangoes are available for sale at Mydin, Jaya Grocer and selected Pakistani restaurants in Kuala Lumpur, Penang and Johor. 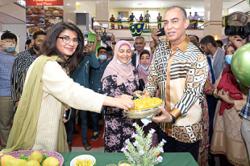 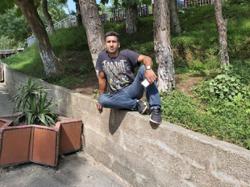