Sign of discontent: A motorcyclist riding along the dedicated bicycle lane with vandalised signboards barring motorcycles from entry along Tun Dr Lim Chong Eu Expressway near Sungai Pinang in Penang.

FIVE warning signboards believed to be vandalised and left on the ground along the dedicated bicycle lane in Sungai Pinang have left the Penang Island City Council (MBPP) disappointed and cyclists in fury.

The signboards, which prohibit motorcycles and allow only bicycles on the lane, were found damaged and their poles bent to the ground along a 100m stretch.

MBPP mayor Datuk Yew Tung Seang said the council was saddened that inconsiderate individuals had taken action into their own hands over their dissatisfaction.

“This is all about education. 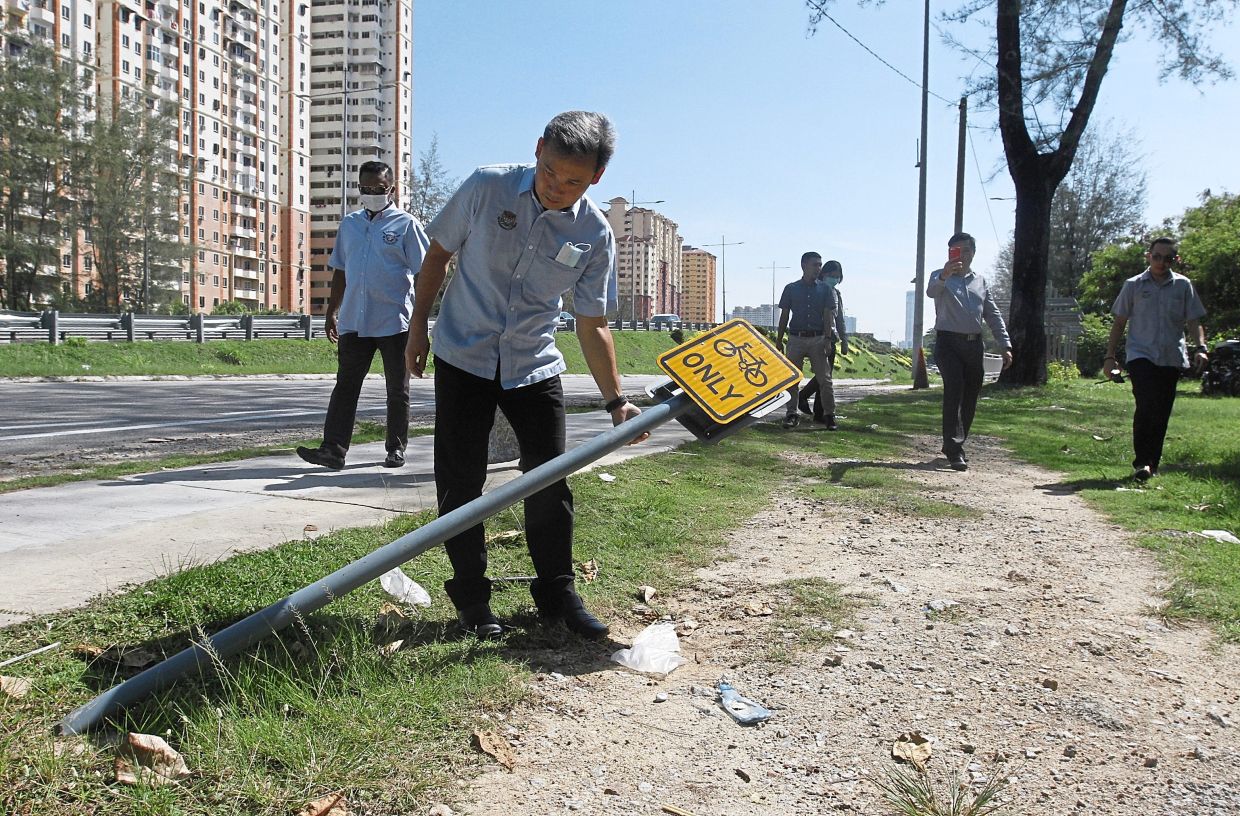 Yew inspecting a signboard for bicycle that has been knocked down along the bicycle lane. — ZHAFARAN NASIB/The Star

“The signboards are public properties and we urge people to take good care of them and make good use of the cycling lane.

“We don’t know if the fishermen are upset and we are willing to listen to them.

“But taking action into their own hands by damaging public property should not be the way, ” said Yew after visiting the site on Wednesday.

He added that the council would repair the signboards and look into installing CCTVs to monitor the stretch.

“We will look into having CCTVs but what’s most important is that Penangites take care of these properties together.”

G Club Penang Cyclists chairman Datuk Dr Lim Seh Guan, who represents a vast majority of cyclists in the state, said higher penalties should be meted out as deterrence.

“Motorcyclists have their own lanes on the expressway to use but some prefer to use the bicycle lane as a shortcut to go counterflow against traffic.

“Without strict action, the vandal will repeat his act and get off scot-free, ” he said.

Dr Lim said it is dangerous for motorcyclists to share the bicycle lane with cyclists as it is too narrow for both together.

“Motorcycles are bigger and faster than bicycles.

“The dedicated bicycle lane is not wide enough for both to pass and there is high risk of impact, ” he said.

Meanwhile, fishermen in the area continue to ride their motorcycles along the designated bicycle lane despite warnings not to do so.

“For years, we’ve been using this route to move along the coast so don’t block our access to the jetties with a bicycle lane.

“This lane is not a road with traffic lines. We can ride on it as we wish, ” said one of them, who was spotted riding his motorcycle when told about the warnings.