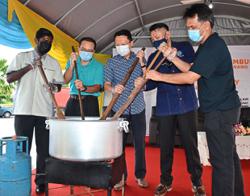 JOHOR BARU: Despite the importance of cleanliness and hygiene, especially now during the Covid-19 pandemic and dengue menace, some people are not taking the situation seriously and caring for the environment.

SWM Environment Sdn Bhd (SWM Environment) garbage collectors can attest to this as they are seeing it strewn about or piled up in public places.

They said the amount of rubbish collected daily had not reduced, except for during the initial phase of the movement control order (MCO).

Now that more people are out and about, they said they were busy collecting rubbish, especially in public places.

Fadilah Malik, 45, said the amount of rubbish she collected at Jalan Permas in Bandar Baru Permas Jaya here reduced during the MCO due to the lack of human activity in the area but has now started to pile up.

“I think some people are just not caring enough for the environment they live in or lack awareness on the importance of keeping their surroundings clean and hygienic.

“Maybe it is time the local authorities introduced strict enforcement against littering in public.

“The many awareness campaigns do not seem to have worked or changed the mindset of these litterbugs,” said Fadilah.

“Even during the MCO, other workers and I went about keeping our areas clean.

“I was afraid of Covid-19 infection as I was handling waste discarded by others but the job had to be done.

“I made sure I used gloves, face mask and washed my hands frequently to stay safe,” she said.

On her hopes in line with the annual Global Garbage Man Day which was celebrated on June 17, she said all she wanted was respect from the public for the job done and for them to keep the environment clean.

“Be responsible with your waste,” she said.

Normah Maon, 58, who has been working as a garbage collector for three years, takes her job seriously.

“Someone has to do this job and I consider keeping public places clean a service.

“Also, the people I come in contact with when working are appreciative of my job which enables them to have cleaner and litter-free surroundings.

“Some are gracious and even thank me. All I ask of them is to dispose of their waste properly.

“Rubbish attracts rodents, mosquitoes and other insects and animals, leading to diseases spreading.

“For health sake be responsible,” said Normah, adding that the people must learn to use the disposal bins placed in public places for their convenience.

She said she had collected a large number of used face masks and gloves during the MCO, with some discarded without care for health and safety of others.

“These used items must be discarded properly and into rubbish bins that are covered.

“Those collecting rubbish are at risk when picking up such things,” she said, adding that she took the necessary precautions to stay safe.

Garbage truck driver Ismail Younos, 54, said he considered his job as a service to the public.

“I have been working as a garbage truck driver for the past 23 years and although there are some who look down on the job, nothing makes me happier than making sure neighbourhoods are cleared of rubbish.

“I hope the public appreciate what garbage collectors are doing for them and make it easier for them to do their jobs,” said Ismail.

“They are our frontliners who strive to clean the surroundings for the public to stay safe and healthy,” he said.

Johor local government and housing committee chairman Ayub Jamil said the state government appreciates the job and sacrifices made by the garbage collectors, especially during the ongoing fight against Covid-19.

“These are the people who come out to work before others wake up and ensure our city is clean. They must be appreciated,” said Ayub.

“We should make our neighbour Singapore an example when it comes to environmental cleanliness and emulate them to turn Johor into a clean state,” he said. 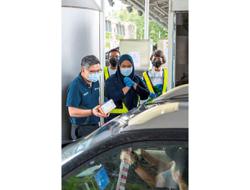