Ruzanna refuses to use her physical defect to gain sympathy but instead took up sewing, and now has customers from as far as Kuala Lumpur. — Bernama

WHILE congenital defect of her legs has limited her movements, being wheelchair-bound has never prevented 35-year-old Ruzanna Zainudin from earning a living.

In fact, Ruzanna makes up for the disadvantage by earning a living as a seamstress to supplement her family’s income.

“I have never used my physical defect to gain sympathy and want to prove to people that I can be independent and able to earn an income,” she said at her home in Kampung Cherang near Kota Baru, Kelantan, recently.

Married with a little daughter, Ruzanna works at home and earns RM300 a month as a seamstress.

It all started in 2003 when she took a year-long private sewing course in Kuala Lumpur, at a rate of RM200 per month, to learn how to sew garments for women and children.

“After I completed the course, I started working for a year at a factory in Pengkalan Chepa that manufactures uniforms, until I made a decision to be self- employed,” she said.

At first, Ruzanna took the opportunity to sew clothes for her own family members before she mustered up the courage to accept bookings from customers who now come from as far as Kuala Lumpur for her service.

She charges between RM25 to RM45 per garment, depending on fabric type and fashion.

“I get orders of up to 50 garments in a month, and it reaches 150 garments as the festive season draws near. I can complete one to two sets of garments a day,” said Ruzanna.

Ruzanna shared that the biggest challenge of her vocation is the measuring of a customer’s body.

“Since I am unable to stand, I have to ask customers to sit down to take their measurements, and there were times when I had to ask them to measure themselves.

“But it is not a problem for customers who are used to my condition,” she said.

“The sewing quality of her garments are very neat and they are comfortable when worn,” she said. – Bernama 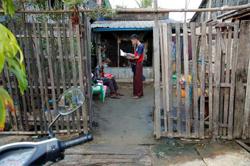 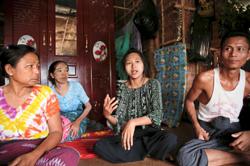