Nor Hisham (standing, right) at the meeting with Lucky Garden stakeholders where he proposed several initiatives for an amicable solution relating to the hawker centre.

KUALA LUMPUR mayor has come up with an action plan in an attempt to appease stakeholders over long-standing problems relating to stalls at the Lucky Garden Hawker Centre in Bangsar.

Some of the measures proposed by Datuk Nor Hisham Ahmad Dahlan include ramping up enforcement against traffic offences in the area, building public toilet facilities and rearranging the stalls to make them more presentable.

He has instructed Kuala Lumpur City Hall (DBKL) to implement the measures within the next two weeks.

“Traffic congestion and lack of cleanliness have been the main reason some residents have asked that the stalls along Lorong Ara Kiri 3 be relocated.

“We will try to address these issues first and then relook at the matter to see if there is any improvement, ” he said after chairing a meeting with Lucky Garden stakeholders yesterday.

Representatives from residents associations, businesses and traders from the hawker centre were given the opportunity to air their concerns to the mayor as well as DBKL officers from the petty traders and licensing as well as the health and environment departments.

Nor Hisham directed his officers to be more vigilant in their enforcement against errant motorists and to station at least two tow trucks in the area.

“Flyers will be distributed so that motorists are aware that enforcement is being carried out and there are no second chances, ” he said.

On the location of the public toilets, he said at least two or three toilets would be built at a suitable location, which has yet to be determined.

He added that any updates on the upgrading initiatives would be channelled to the stakeholders.

Lucky Garden Residents Association (LGRA) president Datuk Ahmad Nordeen Mohd Salleh said they would continue to liaise with DBKL on the effectiveness of the proposed measures. Nor Hisham on a walkabout at the hawker centre. — AZLINA ABDULLAH/The Star

“We are grateful that the mayor was willing to come to us to listen to the stakeholders.

“We only want an amicable solution for all parties, ” he said.

“DBKL must come up with a more permanent solution for the hawkers. How long can enforcement be carried out while we have to put up with the traffic mess and lack of hygiene?”

Yasmin, who has lived in Jalan Cenderai 1 since 1973, said they did not want the stalls to be closed but simply relocated to an area with proper facilities.

On the flip side, several Lucky Garden residents said they did not want the stalls to be relocated but instead be upgraded.

“Yes, they were supposed to be temporary but they have been here for the past 20 years and have served the community well.

“Many of the residents have good memories as they meet up with their friends at these stalls, which serve cheap and tasty food.

“It would be better to improve on the condition of the stalls than to relocate them, ” Tempinis resident who only wanted to be known as Teh said.

Resident Mithra Thuraisingam added that the relocation request sent to DBKL did not represent everyone in Lucky Garden.

“There was no survey carried out among all of the residents, only a handful. So it would not be fair to say that all Lucky

Garden residents are objecting to the stalls, ” she said.

Early this month, five stalls at the hawker centre and one restaurant in the area were ordered to close for two weeks.

They were directed to clean-up by the Federal Territory Health Department (JKWP) for violating regulations under the Food Act 1983.

For years, Lucky Garden residents have complained about poor hygiene conditions at the hawker centre.

Their grouses include stall workers and patrons openly urinating into drains as there are no toilet facilities for them at the hawker centre.

The hawkers are also accused of disposing of rubbish indiscriminately, with bins located close to cooking areas.

The relocation of the hawker centre at its current site in Lorong Ara Kiri 3 was supposed to be for six months, and it had now been 20 years. 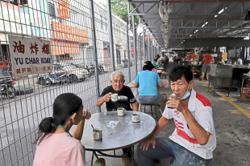 Better dining facilities in the offing