Eateries get two weeks to buck up

The Lucky Garden hawker centre is popular for its food although it has sanitary issues. — SAMUEL ONG/The Star

Department director Dr Param Jeeth Singh said five stalls at the Lucky Garden Hawker Centre and one restaurant nearby were ordered to close for two weeks until Feb 24.

“They have been given time to scrub down and we will reinspect the stalls after a few days to decide if they can resume operations, ” he said, adding that another 15 stalls there were compounded for various food regulation violations.

Dr Param Jeeth said in light of the seriousness of the complaints and the ongoing coronavirus outbreak, the department could not take public complaints for granted.

Residents in the area made numerous complaints about the poor hygiene conditions at the hawker centre. The cooking area is a breeding ground for bacteria.

Among the complaints were the practice of stall workers and patrons openly urinating into drains as there were no toilet facilities for them.

The hawkers were also accused of disposing of rubbish indiscriminately, with rubbish bins located close to cooking areas.

There have also been complaints that people were smoking openly at the stalls despite it being against the law.

The cooking areas at the centre were also filthy.

Ventilation fans put up to absorb the fumes during cooking were caked in grime and oil, and looked like they had not been cleaned for years.

Cutlery placed on makeshift shelves were exposed to the elements and possible contamination by rats and cockroaches. This exhaust fan is covered in grime and looks like it has not been cleaned for years.

Apart from that, traders operating at the hawker centre continuously infringed multiple environment, sanitation and safety regulations under the Food Act 1983.

For instance, many of those preparing and serving food were not wearing hairnets, gloves, aprons and even shoes.

Residents in the neighbourhood were also unhappy with the congestion in the area because of the constant stream of people visiting the stalls.

“The noise from cars and the din of people coming and going are a nuisance to me and my family, ’’ said resident Selvi Gopal.

“Apart from the rat population increasing in the area, I have to put up with people blocking my gate whenever they park in front of my house, ” said A. Selvadurai, a resident living in Jalan Cenderai 2.

Another resident, Raj Kumar, has dozens of photos of stall workers urinating behind his house. 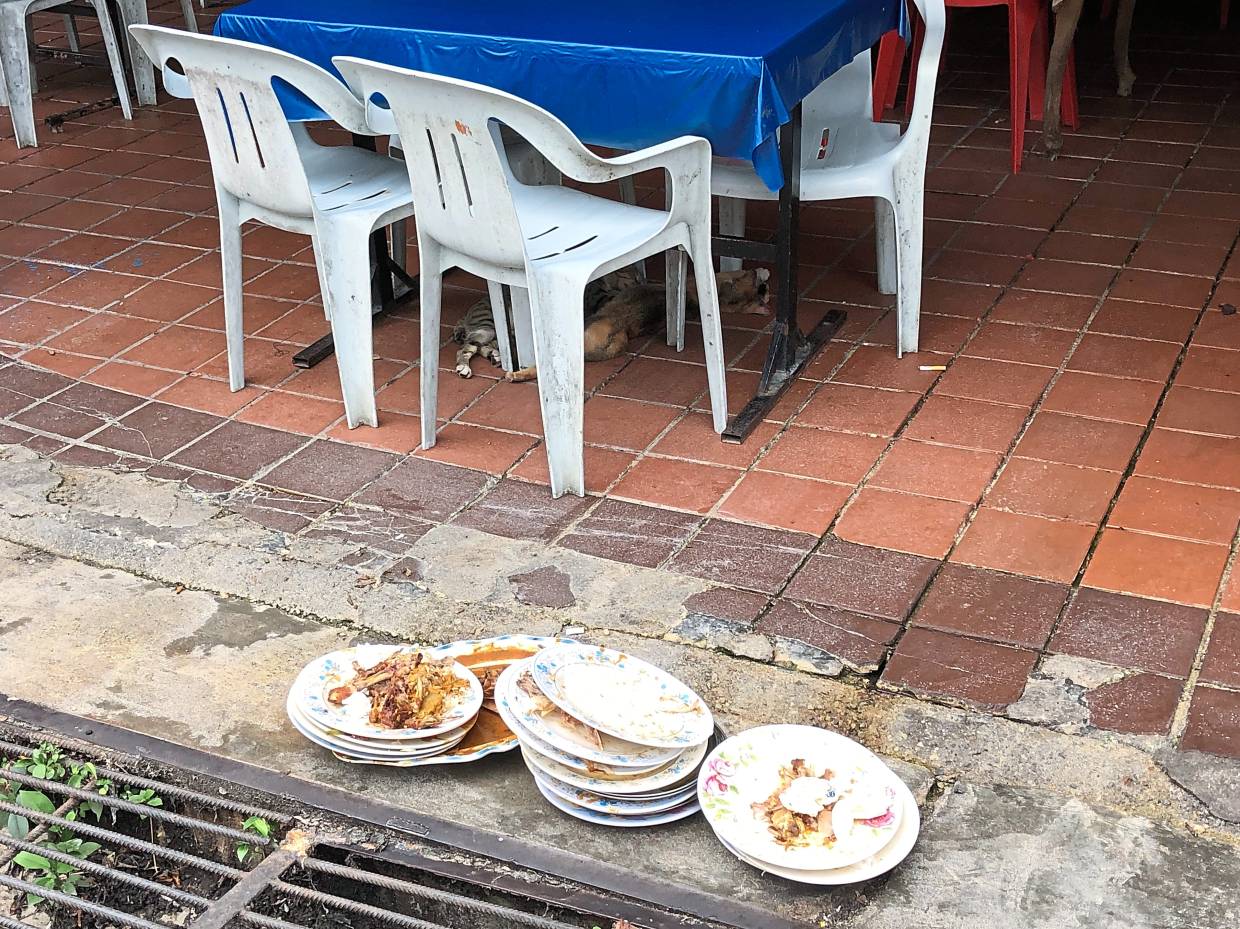 Dirty plates piled up on the floor of the stalls.

“Every day I have to put up with the sight of people urinating; shouldn’t this be illegal, ” he asked.

Despite the health violations, the stalls were still very popular with patrons.

The queue of people lining up at the fish head curry stall, for example, was unending.

“As long as the food lives up to its reputation of offering good food, I will continue to eat here, ” said Christopher Carrol, a Universiti Malaya (UM) student.

“There is variety here and it is also cheap, ” added Normala Idris, another UM student.

Telekom staff Zulkifli Man said he did not mind if the place was dirty.

“I am hungry and I just want to fill my stomach, ” he added.