Geofencing technology is a way to prevent indiscriminate parking and dumping of bicycles provided by bike-sharing services.

MUCH has been said and written about our cities’ vehicle-choked streets and numerous campaigns to encourage the public to use mass transportation.But one of the valid complaints from commuters is the particular lack of point-to-point connectivity.

Perhaps this is where personal mobility devices (PMD) can play a role in helping take more vehicles off the road, as PMDs not only help connect that last mile for public transport users but are also handy for short distance commute.

To this end, Urbanice Malaysia is established to look into this aspect of transportation in detail and formulate a framework for PMDs which include e-scooters and even bike-sharing services.

The entity was set up by Housing and Local Government Ministry in June 2016 to implement projects as well as programmes that offer solutions for urban challenges, conduct incubation programmes for smart urban solutions and provide advisory services on urban planning and development.

Its objective is to promote sustainable and climate-responsive urban development through knowledge-sharing, partnership programmes and multi-stakeholder engagements.

Mobility is one of its projects. Previously, Urbanice had helped to facilitate two community hubs as well as organised the World Urban Forum in Kuala Lumpur in 2018. Urbanice will be working with the relevant authorities in drawing up a guideline to regulate the use of personal mobility devices in Malaysia, Urbanice Malaysia chief executive officer Norliza Hashim said.

“We will be organising a workshop in the second quarter of 2020 to address the bigger picture on how active mobility will be for Malaysia, including regulations and usage.

“They include whether PMDs should be used on the left or right side of the road, permitted locations if dedicated bike lanes are not available and travel speed.

“This workshop is primarily

targeted at local authorities in Penang, Kuala Lumpur and Shah Alam, Road Transport Department (JPJ), the police and selected existing PMD users, to get their feedback.” The three cities are where PMD vehicles are being used on a trial run.

Norliza said Urbanice would base Malaysia’s guidelines on Singapore’s model, as the road traffic rules and cultures of both countries were similar.“The Singaporean government is very strict on regulations, particularly after several PMD-related accidents last year.

“It is estimated that there are about 300,000 micro-mobility units being used on the streets of Singapore.

“At its peak, there were 17 providers of e-scooter and bike-sharing services in Singapore. Now, only three have been approved to operate in the island republic, ” she pointed out.

Norliza believes that bicycles and e-scooters offer low-carbon mobility solutions and sustainable alternatives for first- and last-mile commute in cities, in addition to providing savings to local authorities in terms of infrastructure maintenance.

“They offer a way for people to travel within cities, or short distances such as from train station to office, ” she said.

“The infrastructure maintenance for bicycles and e-scooters is also less than cars, as larger vehicles will cause more wear and tear on roads.”Trial time

Urbanice Malaysia is working on several pilot projects with Anywheel, one of the active mobility sharing operators from Singapore.

“For the 7th Asia-Pacific Urban Forum held in October 2019 in Penang, Anywheel brought in between 150 and 200 e-scooters for delegates to commute to the convention centre that was the event venue, ” said Norliza.

“The initial results have not been encouraging as the 1.5km radius test area is too small.

“Before the six-month trial period is up, we are hoping to get Penang Island City Council’s permission to expand the test area to get more people to use the e-scooters, ” she disclosed. 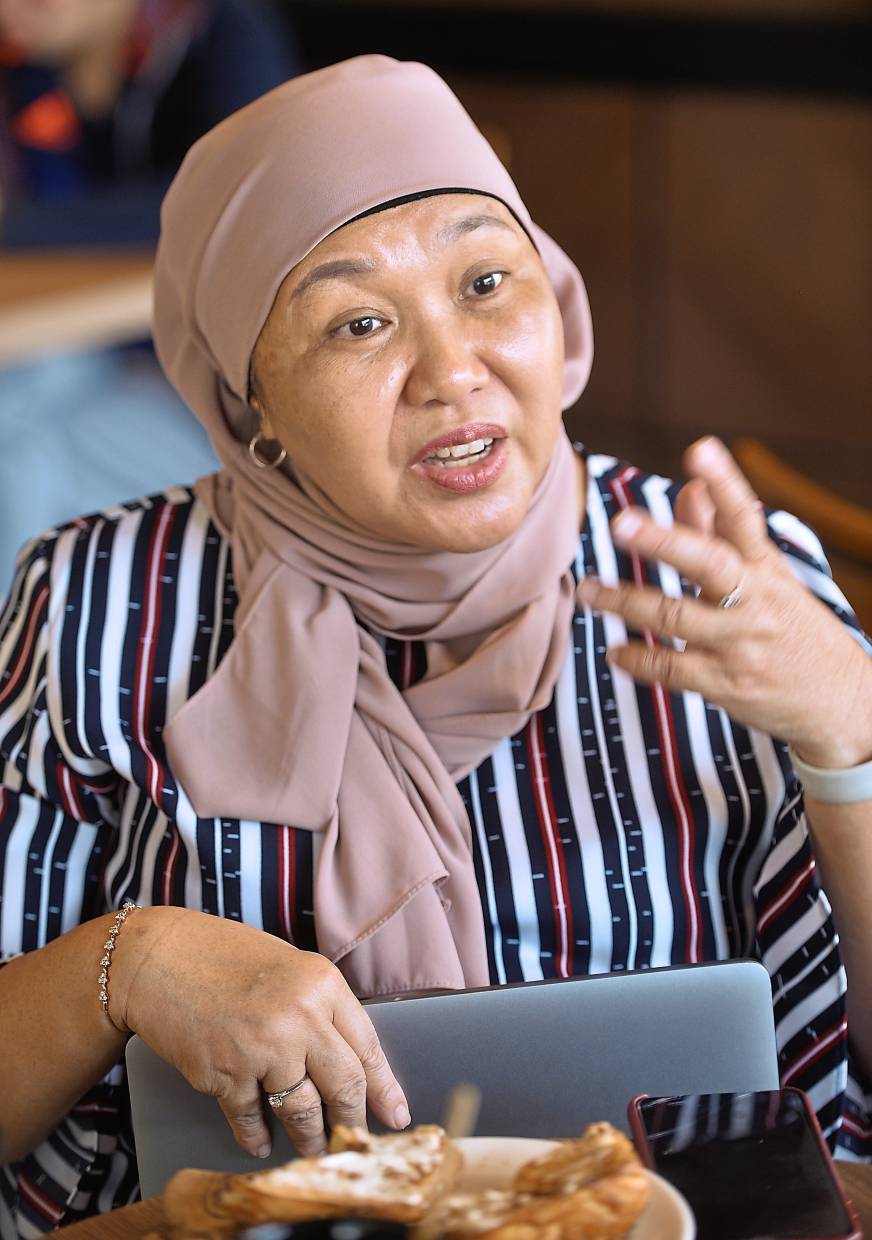 Norliza: “A solution for first- and last-mile commute has to be convenient, accessible and workable.”In Kuala Lumpur, Anywheel has provided 20 e-scooters and 10 dockless bicycles that are used by Urbanice staff for short commutes.

The programme will soon be expanded to the Bukit Damansara community.

“The next stage is Shah Alam.

“A dockless bicycle service will be launched in the first quarter of 2020 in Shah Alam’s city centre, where many government agencies and commercial buildings are located, ” said Norliza.

“Shah Alam will be a good test ground as the commercial and residential areas are nearby and there is a strong low-carbon movement by the city council (MBSA).”

She also said that Anywheel might introduce e-scooters and electric bicycles later on.

She highlighted that the collaboration between Urbanice and Anywheel would explore the possibility of creating an ecosystem to expand the service to other cities and towns.

“We cannot scale up active mobility sharing services in Malaysia until there is some form of regulation and awareness campaign, ” she stressed.

“A solution for first- and last-mile commute has to be convenient, accessible and workable.

“Ideally, we hope that bicycles and e-scooters can share the same road as cars, so that some space can be reclaimed for pedestrians, ” she added.

The active mobility project will kick off in Shah Alam with a bike-sharing service in Section 14 this month.

“It will start in the city centre as there is an existing bike lane there. The service is aimed at those working or needing to head to government and commercial buildings such as the state Secretariat building, Wisma MBSA, SACC Mall and PKNS Complex.”

He said the state government was keen on having active mobility services in Selangor to serve as an alternative mode of transport for first- and last-mile connectivity, which in turn would lessen the use of fuel-based vehicles and lower carbon emissions.

“For example, some of the employees at the state Secretariat will drive out to the nearby shops or malls to pack their meals.

“Providing a mobility sharing service will hopefully encourage them to use bicycles or e-scooters instead, ” he added.

Ng said the geofencing technology employed by Anywheel for their two-wheelers would address the problems faced by previous bike-sharing services, such as indiscriminate parking and dumping of bicycles.

“Users will be required to park the bicycles in designated areas and scan a QR code there to end their ride.

“They will face a penalty if they fail to do so, including additional fees and deducted points, ” he said and elaborated that enforcement would be jointly handled by the service operator and local council. 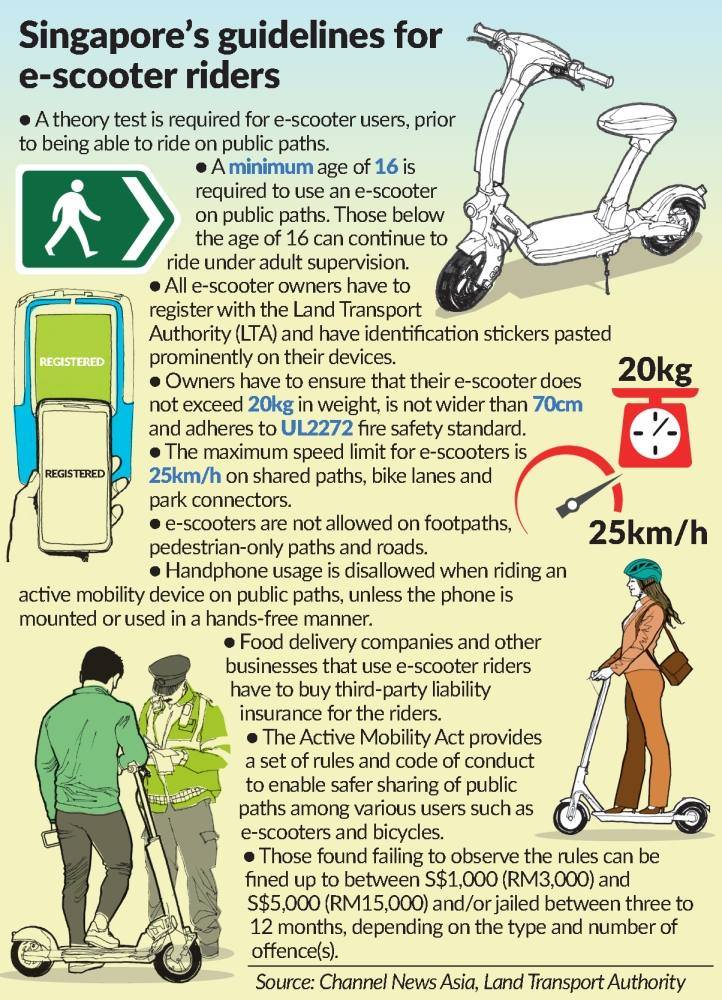 “Selangor will take the lead in drawing up guidelines for what can and cannot be done by active mobility service operators in the state.

“However, regulation of e-scooters will come under Transport Ministry or JPJ’s jurisdiction, including the maximum speed limit and whether safety equipment is mandatory.

“There is also potential for expanding the active mobility service to other areas in Selangor, such as Bandar Sunway, Puchong Jaya, Ampang Jaya, Subang Jaya and SS2.

“For these areas, e-scooters and bicycles will be used for getting around within a township or running errands, rather than connecting city to city, ” he said, adding that the expansion could happen by late 2020, depending on the project’s success in Shah Alam.

In areas where there were no dedicated bicycle lanes, Ng said the local councils could consider opening up back alleys for bicycles and e-scooters.

He added that doing so would simultaneously address the issue of riders’ safety and cleanliness of back lanes.

“Our Civil Engineering and Urban Transportation Departments are still analysing with the police the feasibility of using e-scooters in this city.

“E-scooters are still not allowed in Kuala Lumpur because without proper guidelines, they are dangerous when used on the road or pedestrian walkway.

“And we do not want the situation to turn out like oBike, where in the early stages it was alright but it became a problem for the city later, ” he said.

The oBike service was an on-demand and dockless bike-sharing platform introduced in 2017.

While it was popular during its introduction period, things fell apart when the problem of uncollected bicycles and complaints of obstruction started cropping up.

DBKL’s Enforcement Department had to confiscate oBike bicycles that were abandoned in the city as they obstructed pedestrian walkways and streets.

At the moment, Beam is the only operator for shared e-scooter rental in Kuala Lumpur.

However, Ibrahim said DBKL had sent a letter to Beam to stop its operations until the company received clearance from the relevant agencies.

“We have not allowed Beam to operate in Kuala Lumpur and we have taken enforcement action on e-scooters that are scattered around the city.

“We have confiscated more than 100 e-scooters that obstructed vehicular traffic or pedestrian walkways, because they were an eyesore and caused public inconvenience, ” he said. 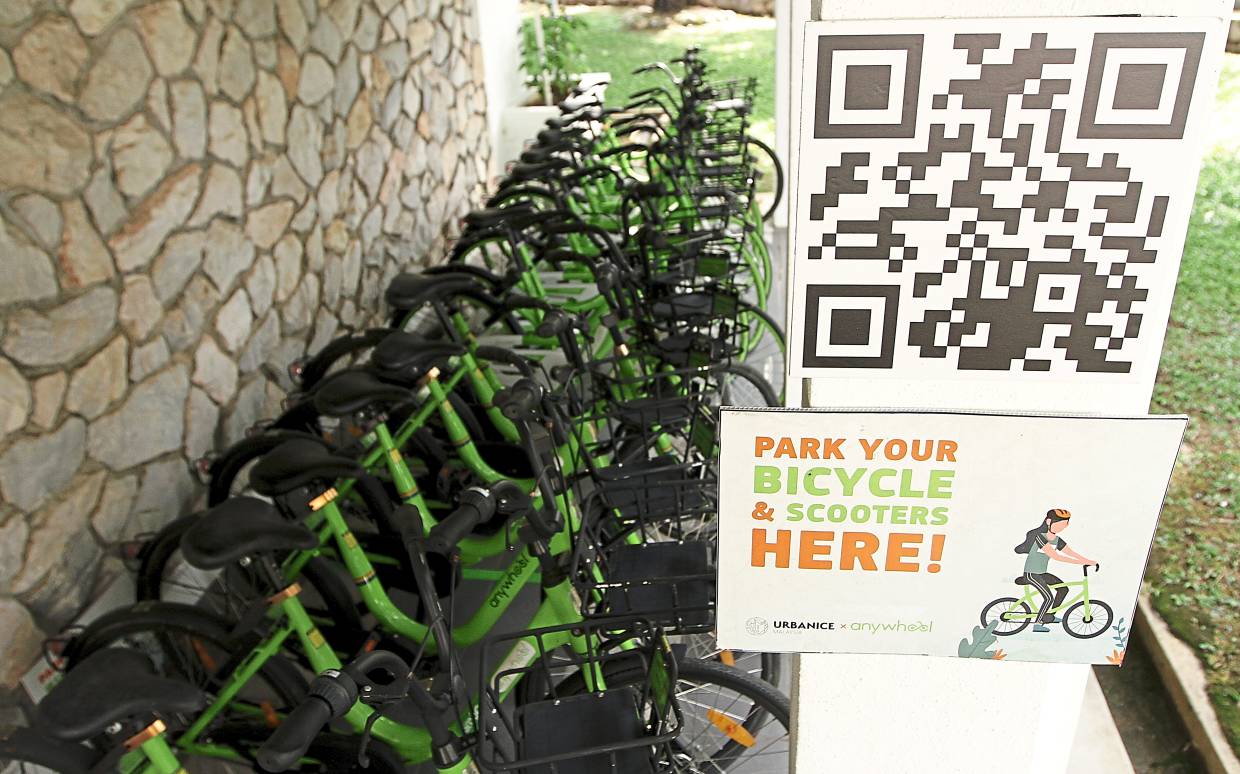 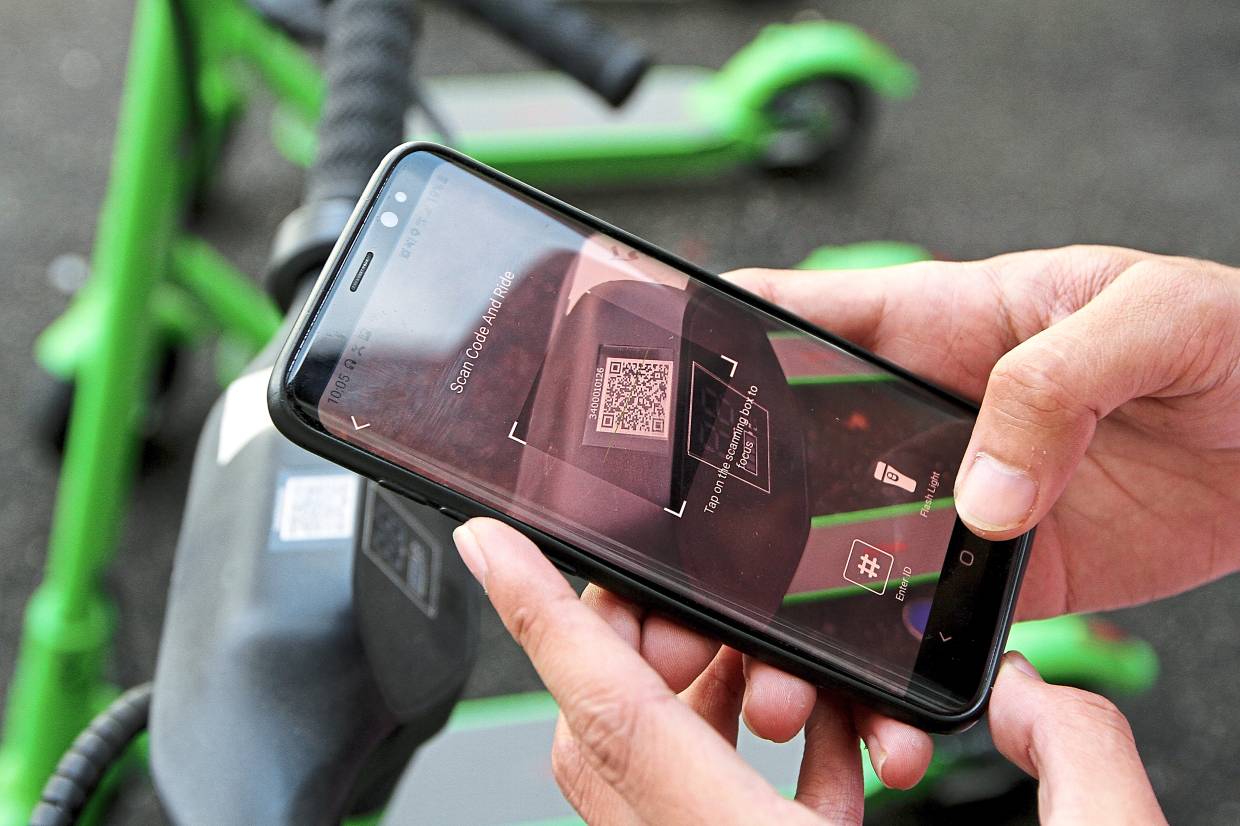 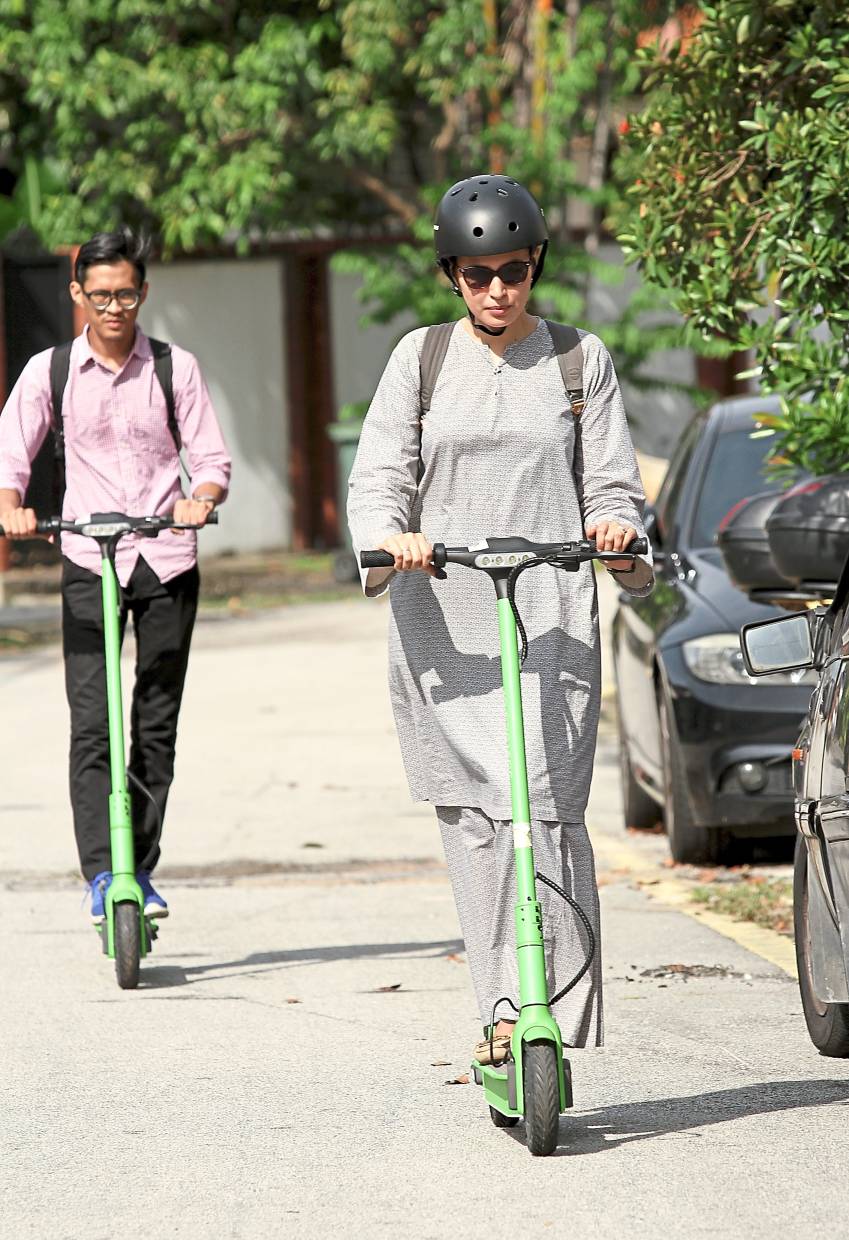 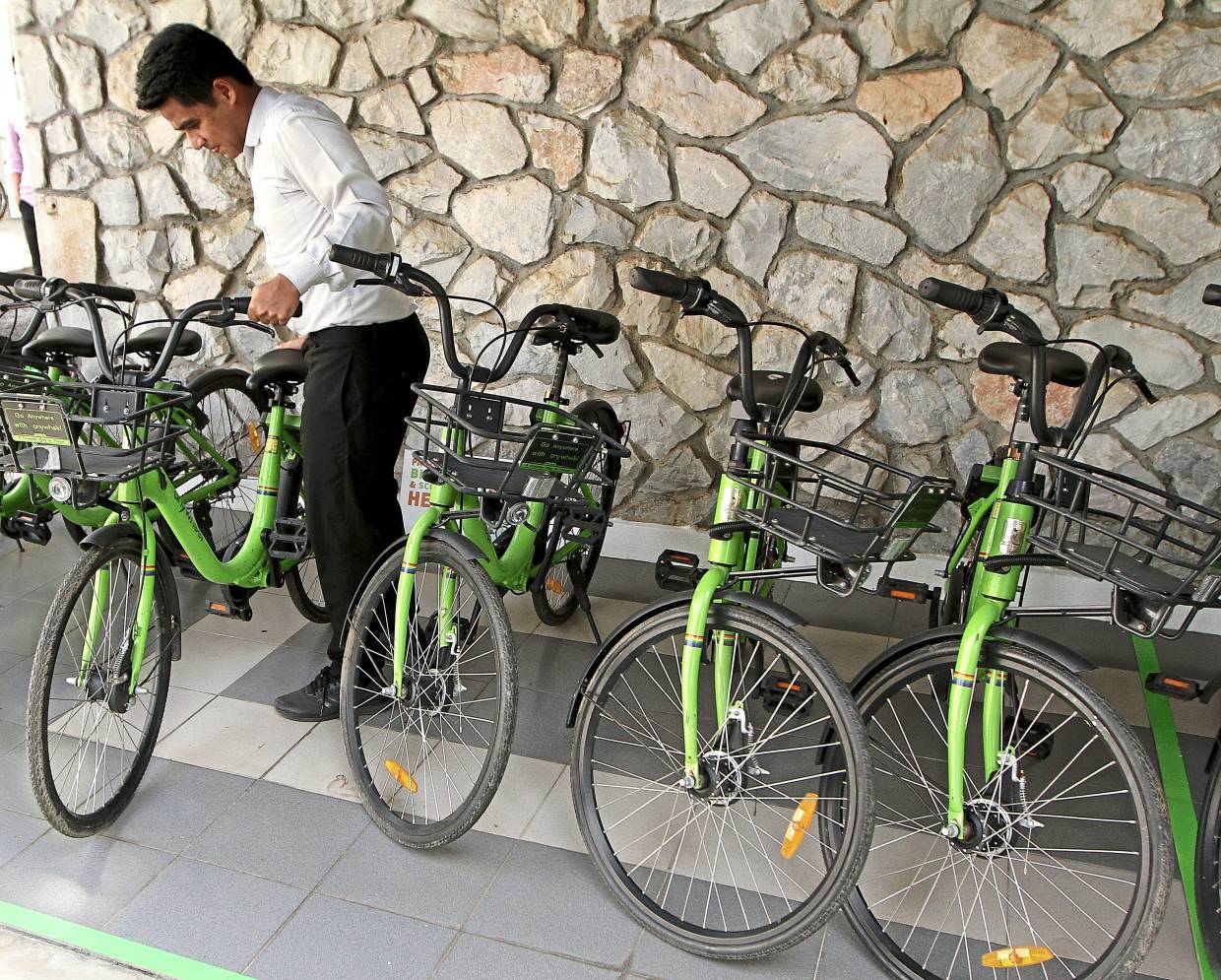 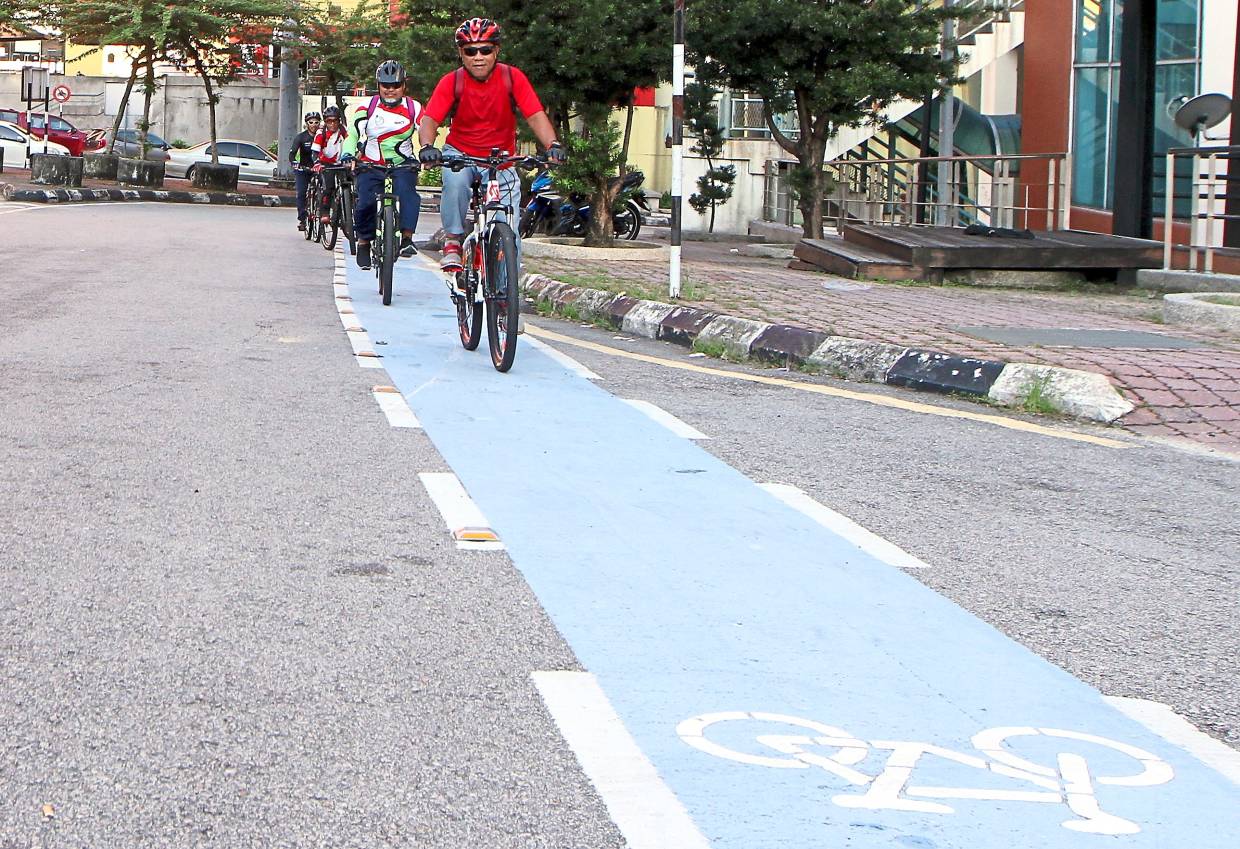 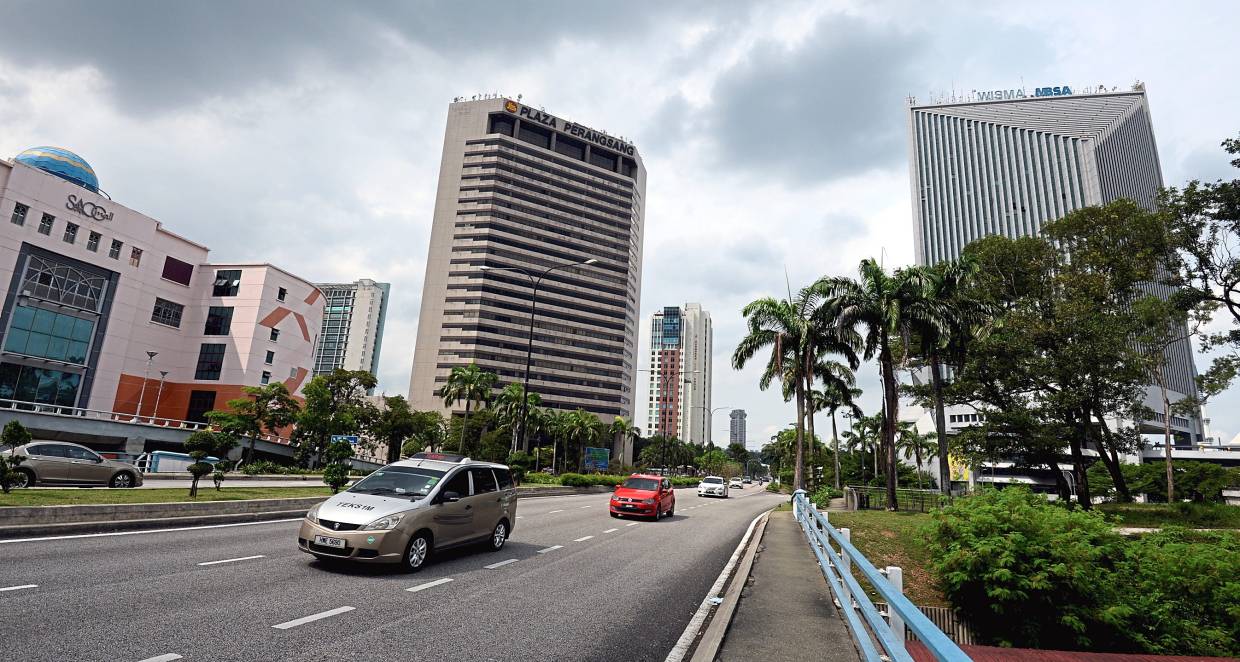 Geofencing technology is a way to prevent indiscriminate parking and dumping of bicycles provided by bike-sharing services.

Norliza: “A solution for first- and last-mile commute has to be convenient, accessible and workable.”

Anywheel’s users have to scan a QR code to unlock the urban mobility devices, such as e-scooters and bicycles, and to end their ride.

The urban mobility project will kick off in Shah Alam with a bike-sharing service this month. --- Photos: MUHAMAD SHAHRIL ROSLI/The Star

The two-wheelers of bike-sharing services are categorised as personal mobility devices.

The upcoming guidelines will also govern which side of the road that PMDs are to be used. --- Photos: SS KANESAN/The Star

MBSA may need to rethink some parts of its bicycle lane, for the safety of cyclists, like this stretch running between vehicle lanes.