On the trail of Sun Yat Sen and comrades

Chan (in pink) with some shop owners and Chinese association leaders at the unveiling of the signage in Jalan Market.

A FIRST-of-its-kind trail marker of Chinese revolutionist Dr Sun Yat Sen and his comrades has been established in Ipoh.

Covering some 20 locations in Ipoh’s old town and new town, the marker is an added tourist attraction to the city’s existing heritage trail.

The trail corresponds with the book Dr Sun Yat Sen and His Comrades in Ipoh, authored by Ipoh-born Chan Sue Meng, which links Kinta Valley to Dr Sun.

It is produced and managed by Sue Meng Heritage Sdn Bhd.

Chan said for the first phase, 11 signage would be installed at the entrance of the sites and buildings listed to mark their former functions as places that were occupied by supporters and ran activities in support of Dr Sun.

“Each aluminium signage features a unique image, site title corresponding with that in the book, and a unique QR code that will lead visitors to learn more about the history of the site.

“There are various trails of Dr Sun in Penang, Singapore, Hong Kong and even London but not much is known of his expedition in Perak.

“My great-great grandfather Lee Guan Swee was a staunch follower of Dr Sun, so I decided something needed to be done, ” she said during the unveiling of one of the signage shared at Happy 8 (a boutique hotel) and Pentagon Chemical Supplies in Jalan Market.

Chan said the Happy 8 and Pentagon Chemical Supplies, were originally the home and business addresses of Dr Wong I Ek, a medical doctor who was Dr Sun’s classmate in Hong Kong.

She said Dr Wong was one of the earliest Chinese doctors in Malaya, and he met Dr Sun while studying medicine in 1890 at the Hong Kong Medical College, where Sun was a pioneer student.

“After returning to Perak in 1895 and spending around 10 years in the government service, he established his private medical practice at 46 Market Street, where currently Happy 8 and Pentagon Chemical Supplies are operating, ” she added.

The other notable landmark Chan said, was the Perak Hainan Association in Jalan Sultan Yusuf, once the home of her great-great grandfather.

“When Dr Sun visited Perak, he stayed at my great-great grandfather’s house, ” she added.

Another of Dr Sun’s most loyal supporters was entrepreneur Teh Lay Seng, who ran a sundry shop.

“Today, the shop Keat Sin Leong is still being run by his descendants in Jalan Bijeh Timah, ” she added.

The shop Kin Kok Coffee was once the Kin Kok Daily newspaper building that was started by a Kuomintang supporter.

“At the Perak Cave Temple, a Sun Yat Sen gallery had been set up in honour of the Father of Modern China, ” she added.

Further explaining about Dr Sun and how he garnered the people’s support, Chan said around the 19th century, mainland Chinese arrived in Malaya by the thousands to work at tin mines in Perak. Along came more Chinese to set up businesses to serve the communities.

“Many of them shared and contributed hard-earned income to realise Dr Sun’s vision of a better China.

“Dr Sun visited Ipoh twice (as recorded in history), as well as other parts of Perak, ” she added. 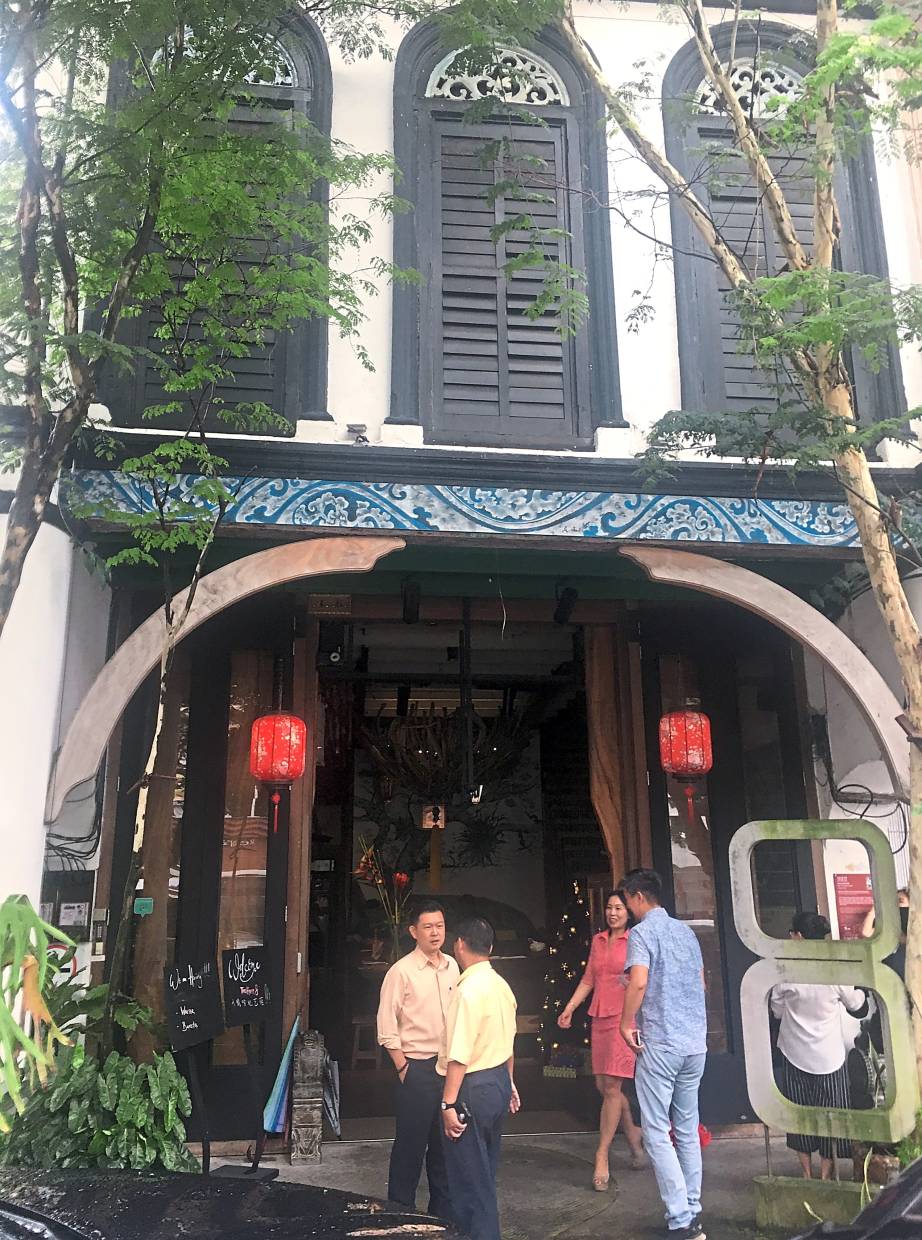 Chan (in pink) with some shop owners and Chinese association leaders at the unveiling of the signage in Jalan Market.

The Happy 8 boutique hotel and the Pentagon Chemical Supplies next door to it used to be the home of Dr Wong. — Photos: RONNIE CHIN/The Star

The Perak Cave temple is another trail of Dr Sun.

A map of Dr Sun’s trail during his expedition in Perak.