Poser over takeover of public sports facility in Klang

The Sultan Sulaiman Stadium renovation project’s completion is delayed because its grandstand’s steel structure has to be replaced. — Photos: AZLINA ABDULLAH/The Star

STAKEHOLDERS are eagerly awaiting the reopening of Sultan Sulaiman Stadium in Klang.

However, their joy has been dented by talk that Selangor State Sports Council (MSNS) may be taking over the stadium.

They are worried that locals’ use of the stadium, which is currently being managed by Klang Municipal Council (MPK), may be restricted if this happens.

Ex-sportsman and hockey umpire Serjeet Singh, 61, said it was upsetting to hear that the iconic stadium, which is undergoing major refurbishment using ratepayers’ monies, could be put under a public-private partnership arrangement.

“MPK might see it as a plan to monetise its asset. It had tried in the past to ink an agreement with MSNS to take over the management of the Pandamaran swimming pool in Port Klang but that deal did not materialise after public opposition.”

Serjeet is worried that any move to privatise the stadium will curtail the community’s use of the public facility for local tournaments and school sports meets.

“It might make it harder and more expensive for sports clubs to book the field, ” he said.

The stadium has been closed since September 2018 for refurbishment.

It is a popular venue among sporting enthusiasts and schools often hold their annual sports day there.

Amid rising concerns over the possible takeover of the stadium, Klang Consumer Association president Devadass Anjan said MPK should engage with the community before making any decision.

“We do not know how MSNS will manage the place and whether schools and sports clubs can still continue using the stadium.

“We do not want the stadium to be given to a third party.

“We want everyone to be able to enjoy the facilities without having to pay high fees, ” he said. Longer time for repairs

Meanwhile, it is learnt that the cost to refurbish the 45-year-old sports facility has gone up from the earlier estimated amount of RM4mil.

This is because the contractor had to be given an additional allocation for the grandstand.

An MPK spokesman said because of this, the contractor needed more time to complete the repairs.

“The delay is also due to cost-cutting measures as a smaller number of workers have been hired to handle the project, ” added the spokesman.

During StarMetro’s visit, the grass had been planted while work on the building, grandstand, track, drainage and wiring were still ongoing.

A regular user of the outdoor gym next to the stadium, who only wanted to be known as Ng, said he did not mind if the council took an additional six months to complete the works.

However, he expressed worry that the public facility might be privatised.

He said the water stagnation issue had been resolved as a downpour earlier this month did not result in the drains around the track overflowing.

On Jan 17, StarMetro in a frontpage story “Delay in reopening” had reported that the deadline for the refurbishment would be extended because of water ponding issues.

Jogger I. Balakrishnan, 64, said the contractor should increase manpower so that the project could be completed earlier and the public could use the facilities sooner.

MPK Engineering Department head Zamri Othman, when asked about talk that MSNS might be taking over the management of the stadium, said: “I am not aware of this development and I do not want to comment further.”

On the additional allocation given to the contractor, Zamri said RM375,000 was needed because the steel structure of the grandstand had to be replaced.

“We cannot compromise as it involves public safety.

“MPK has also approved a ‘refined’ design to give the stadium a better look and feel, ” he said.

On the delay, Zamri said all works must be completed by Oct 9.

He added that the contractor would have to pay a daily penalty if there was any delay beyond the deadline given for him to complete the works. 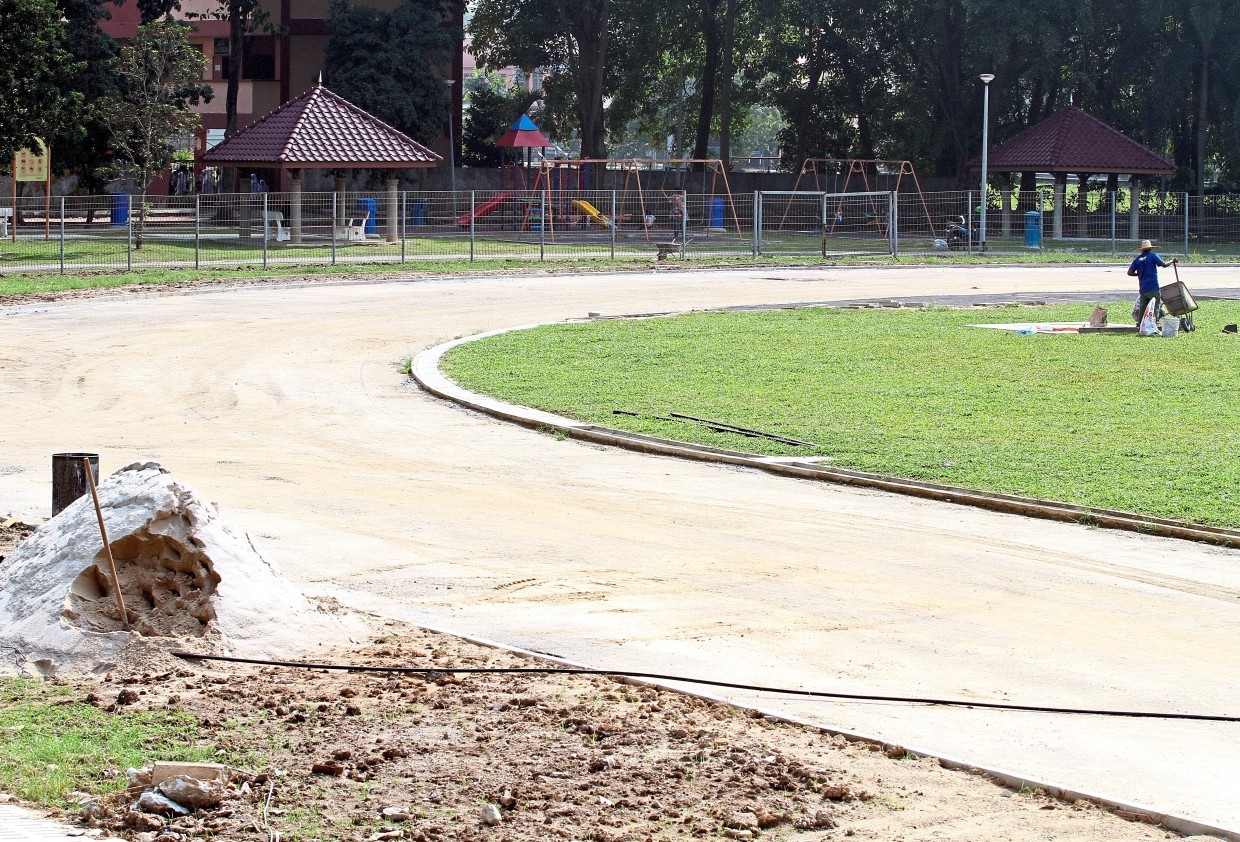 The Sultan Sulaiman Stadium renovation project’s completion is delayed because its grandstand’s steel structure has to be replaced. — Photos: AZLINA ABDULLAH/The Star

Work to upgrade the Royal Gallery has not begun.

A worker painting the steps of the grandstand as the Oct 9 deadline looms.

The running track being repaved with synthetic material.

Artist’s impression of the Sultan Sulaiman Stadium grandstand after refurbishment.

The stadium entrance being given a fresh coat of paint.

The drainage problem seems to have been resolved.

Serjeet is worried that any move to privatise the stadium will curtail the community’s use of the facility for local tournaments and school sports meets.

The stadium’s pillars getting a shade of blue.