Inner workings of a teenage mind

(Left to right) ‘Schoolmates’ is one of the pieces on display at the National Art Gallery. ‘An Optimist With A Broken Ribcage’ expresses Mulaika’s empathy for a friend who was suffering from such a predicament. ‘Tok’s Pond’ captures her late grandfather’s love for gardening.

AS THE youngest artist to have ever exhibited at the National Art Gallery, 16-year-old Mulaika Nordin’s first solo show, “A Thousand Days of Change”, gives audiences an insight into the workings of a teen mind.

Mulaika’s works assure them that teenagers are not wild, hormone-raged and clueless as some quarters would like to believe.

Instead, it shows off a side of a younger generation that is well informed, thoughtful, opinionated and diligent.

In the six short films made by this artist, she opens up about her anxieties, what her critics think of her work and makes a stand on life’s common vices (smoking, gambling and excessive consumerism). ‘Life and Water’ is the artist’s feelings of being stung by jellyfish on canvas.

Her strongest stand is on junk food, sodas in particular, where she is seen emptying an entire bottle of soft drink onto the ground. The word “Resist” appears in bold right after this act.

But from the brief time spent with this artist at a press conference, we know she has a weakness for chocolate bars.

“Life is short,” said Mulaika as a way of reasoning why one should not resist when it comes to some things.

In “Forces”, a piece from her Blue Series, she tells of how she had shed tears because of exhaustion but felt that she could not give up as it was her mother who commissioned the piece and she did not want to disappoint her. 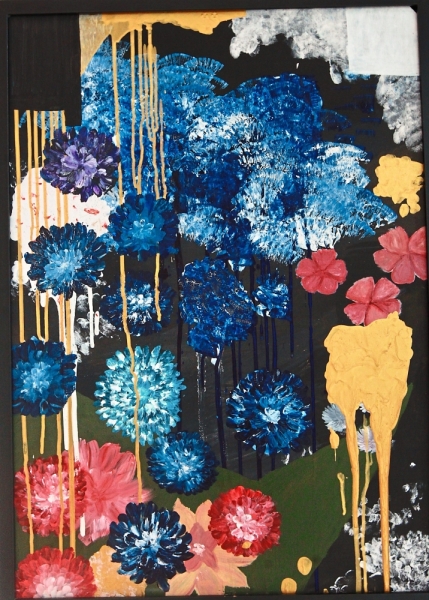 In “Optimist With A Broken Rib Cage”, she expresses her empathy for a friend who was suffering from such a predicament after getting into a fight.

Deriving inspiration from his courage and ability to smile despite the pain, Mulaika has preserved the moment in acrylic on paper.

In “Life and Water”, she paints her feelings of being stung by jellyfish on canvas.

On whether the marine animal had been made to pay with its life for inflicting her with so much pain, her reply was, “It wounded me but I didn’t kill it”.

“I was screaming on the way to hospital,” recollected Mulaika of the incident.

‘Forces’ tells of how Mulaika shed tears because of exhaustion.

Mulaika started painting at age six but it was not until her grandfather’s passing that her artistic side was unleashed at age 12.

The exhibition showcases 55 of her best works made during this period, capturing her transition into young adulthood.

In “Tok’s Pond”, she captures her late grandfather’s love for gardening, using bright, vivid blooms as an indication of how alive the artist’s memories are of him. ‘Schoolmates’ is one of the pieces on display at the National art Gallery.

Eloquent and focused, she frankly reveals having no set plans for the next five years. Expression, she insisted, was the spur that had motivated her in this collection.

“People see me as dead and cold all the time, but inside I am the opposite,” said Mulaika.

This collection is 60% sold and among the collectors who have bought Mulaika’s works are noted art collectors Zain Azahari and Ahmad Zakii Anwar.