WHAT goes well with chocolate? Lots of things, and rum is one of them.

While most people are familiar with rum-infused chocolates, rum and raisin ice cream and chocolate rum balls, to name a few, pairing the spirit with chocolates like one would with wine and food calls for a fun masterclass of sorts.

This was what happened when local chocolatier Chocolate Concierge and liquor distributor Wholly Spirits, in collaboration with South American rum producer, Diplomatico, treated guests including industry partners to an afternoon of “Tipsy Chocolate” at W Kuala Lumpur.

The panoramic view of Kuala Lumpur city centre from the hotel’s 23rd floor EWow suite enhanced the ambience of the swanky afternoon of rum and chocolate tasting, in the presence of Chocolate Concierge owner Ong Ning-Geng and Jungle Bird rum bar director Joshua Ivanovic who educated everyone on the flavour complexities of three different types of rum, and single origin locally produced chocolate. Diplomatico is a privately-owned Venezuelan distillery, distributed in over 80 countries.

At the event, the first Tradition Range of Diplomatico rums to be decanted in glasses was the Mantuano (“nobleman” in Spanish), an eight-year blended rum with 40% alcohol by volume (ABV) aged in white oak casts that has column, batch kettle and pot still distillates derived from sugarcane, molasses and honey.

“This is a great rum that exudes vanilla, coffee and dry cocoa notes. The longer it lingers in your mouth, the better,” said Ivanovic as he swirled the dark golden colour rum while inviting attendees to sniff the aroma before sipping the liquid.

“The green tinge at the meniscus is a good sign of aged rum,” he explained as he tilted the glass against the light.

This was paired with Ong’s Dry Aged and Smoked Chocolate with rosemary, consisting of  fresh ganache frozen at -18°C and smoked twice at room temperature with hickory wood chips. Chocolate that had been aged for 100 days was grated on top. He did this by starting his own cocoa farm in Pahang and grew them with the help of orang asli villagers, who learned how to plant cocoa trees from Ong, and joint ventures with other local farms.

“When you combine chocolate that is fat-based, and alcohol, it takes a while for the flavours to intermingle, and rum opens up different sensations when paired with chocolate,” explained Ong.

Next to be served was the Planas, an intense white rum aged for six years with a 47% ABV. A buttery and creamy versatile rum with tropical and coconut notes, it gets its crystal clear appearance through a complex charcoal filtration process prior to bottling.

White on White, comprising toasted coconut shreds and coconut milk encased in single origin chocolate, was paired here, which brought out the intense and pronounced finish on the palate.

Christmas cake in a glass best describes the third rum, Reserva Exclusiva, a dark and elegant sipping rum with a 40% ABV that is distilled in ancient copper pot stills, aged in oak casts for up to 12 years that has maple syrup and orange peel notes. 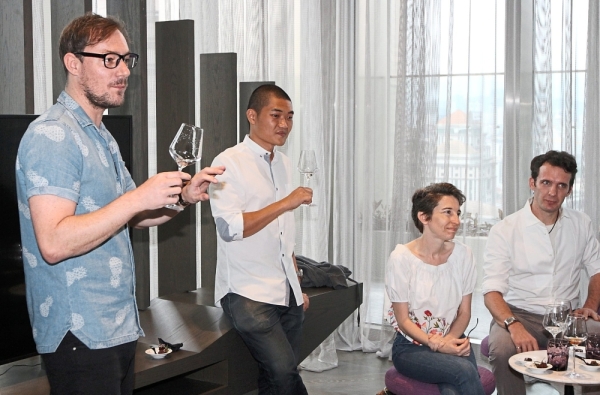 Crisp, sweet toffee was exuded as we sipped this with Cocoa Brulee – caramel caviar set in agar, cacao nibs and almond cream.

After the masterclass, we adjourned to Woobar for curated cocktails and canapes concocted using the rum and chocolates.