The car park area at the school will be partially converted into sepak takraw and futsal courts under phase 3 of the refurbishment plan.

KEEN on bringing back the glory of their alma mater, two old boys of the 134-year old SK St Mark (M) Butterworth on the Penang mainland have come together to help make this possible.

Steven Robert, 72, and Muthukumara Subramaniam, 49, took up positions in the school’s Board of Governors since last year to provide hands-on assistance.

Along with the school’s former Parent-Teacher Association chairman Kumar Kaneson as well as volunteers Prabakaran Krishnan and Muniswaran Rajoo, they hope to steer major changes for the school.

Under the chairmanship of Rev Soong Hoe Pin, the vicar of St Mark’s Church Butterworth, the team has big plans to give the school its much needed facelift. 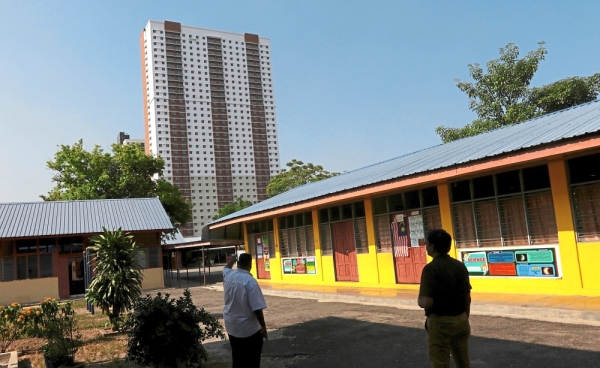 Prabakaran (left) pointing at one of the newly completed apartment blocks that is within walking distance of  the school.

Steven said the school has a special place in his heart, especially since his late father Robert David had served as its headmaster for 19 years from 1959 to 1978.

“I was active in hockey, football and athletics. I also joined the 1st Butterworth company Boys’ Brigade team and school drama besides help operate the cinema projector,” he said.

Muthukumara, who is the board’s project manager, said returning to the school after completing his primary education 37 years ago, created a nostalgic feeling in him.

“I was a little teary eyed when first approached with the idea of helping to rebuild the school. “This is the place where I met many people who had a major influence in the early part of my life,” he said.

Prabakaran, who is the board’s director of operations and social media, said the upgrading work would be carried out in three phases.

He said phase 1, which took off recently, would see full repainting and rewiring work, rebuilding of the toilets, school entrance and guard house; repairing of roofing near the science lab, changing of ceiling and retiling of the teachers room, among others.

“Phase 1 costs about RM300,000. And, we will use the RM300,000 allocation received from the federal government for mission schools last year as well as the RM45,000 fund from the state government to repair the toilets,” he said in a recent interview at the school in Jalan St Mark. He said phase 2 would involve converting the block that presently houses the canteen, library, surau and meeting room into a double- storey building.

“Once completed, we would have at least 10 rooms at the new building for the office, teachers room, science lab, meeting room, library, counselling room and surau.

“Phase 2 with an estimated cost of RM1.6mil, would also include buying new furniture and air- conditioning units for some of the rooms.

“We hope to seek funds from both the federal and state governments as well as seek donations from old boys and well-wishers for this project,” he said.

At present, he said, the school has 15 classrooms spread over six blocks and a partially open hall. Dilapidated roofing such as this one at a classroom block will also be repaired.

Phase 3, he noted, would include converting part of the parking area into sepak takraw and futsal courts, as well as having proper awning from the entrance to all blocks.

Rev Soong said with the infrastructure upgrade, he hoped more parents would want to send their children to the school.

“Two towering apartment blocks were recently completed near the school, and a few more are coming up in the vicinity. So, we expect this area to be quite densely populated in the near future,” he said.

He noted that the school, which has an enrolment of 188, emerged champion in the state-level inter-primary school hockey meet in 2017.