THE Penang economy will be good during the first four-month cycle of the Year of Pig from mid-February to mid-June.

That is according to the forecast during the annual Chneah Hoay (flame-watching) ceremony at Hai Choo Soo Temple in Tanjung Tokong, Penang.

The prediction was based on the intensity of the three flames with each flame representing a four-month cycle, said Poh Hock Seah honorary secretary Lim Hooi Kooi.

He said the Penang economy this year would be better than last year.

“The first flame recorded was very good as it was very high and strong.

“The second flame was average, while the third one was fair.

“It summed up that the economy during the last four-month cycle will be slower, but it will not be a tough year for the people. 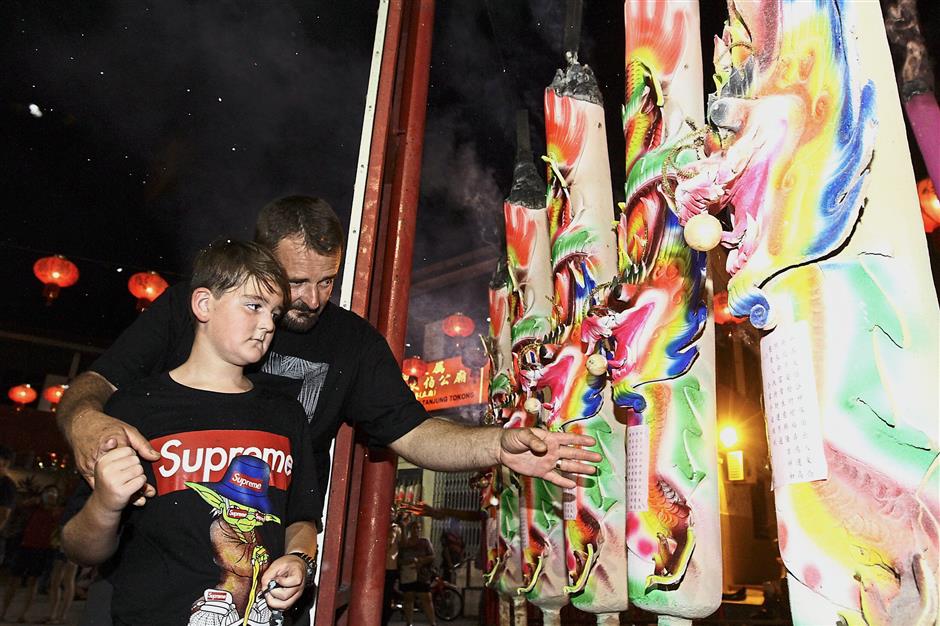 “Comparing with last year, it was easier to light up the flames.

“This year will be a better year based on the height and intensity of the flame,” said Lim after the prediction at the temple.

The annual ritual began at 11.46pm on Monday night after the tide covered the biggest boulder at the bay fronting the temple.

The temple’s lights were switched off along with oil lamps and candles snuffed out to enable the Poh Hock Seah committee members to scrutinise the flames.

Then cymbals clashed and embers in the deity’s urn were kindled.

The first flame was successfully ignited at midnight, followed by the second one at 12.03am and the last flame at 12.05am.

According to Lim, the flame watchers at the temple had to fulfil a few criteria before they were allowed into the temple.

“They cannot attend funerals or visit any mothers who are under confinement and their babies in the past two weeks.

“This will interfere with the accuracy of the flame,” said Lim, adding that members who just lost their parents would have to mourn for three years and were not allowed to enter the temple during the ceremony.

The statue of the Tua Pek Kong deity is brought from the Poh Hock Seah Tua Pek Kong Temple in Lebuh Armenian to the Hai Choo Soo Temple in Tanjung Tokong each year for the ceremony and returns the next day.

The God of Prosperity is said to be able to forecast the state’s economy for the year via flames from the burning joss sticks.

The ceremony has been held annually on the eve of Chap Goh Meh since 1844.

Legend has it that the deity will also come out to meet other resident deities of various areas on the 14th day of Chinese New Year.

Earlier, thousands of devotees thronged the temple to give thanks and receive blessings for the new year ahead.

The devotees and visitors were also entertained by a lion dance at the event.