Policemen taking their oath during the monthly gathering.

PENANG police are looking for more than 2,000 people who are wanted for various crimes committed in the state over the last few years.

Its chief Comm Datuk Seri A. Thaiveegan said he had told his men to step up their efforts in protecting the people.

He said there were about 100 people wanted for criminal offences, 900 for commercial crime and another 1,000 for narcotics-related crimes in the state.

“Track them down and arrest them. We must understand the feelings of the victims, and lend them a helping hand whenever needed,” he said during a monthly gathering at the police headquarters in Penang Road recently.

He said the crime index dropped 10.3% as of Sept 30, compared to the same period last year.

He added that 3,081 property crime cases were reported this year, a decrease of 9% from last year. 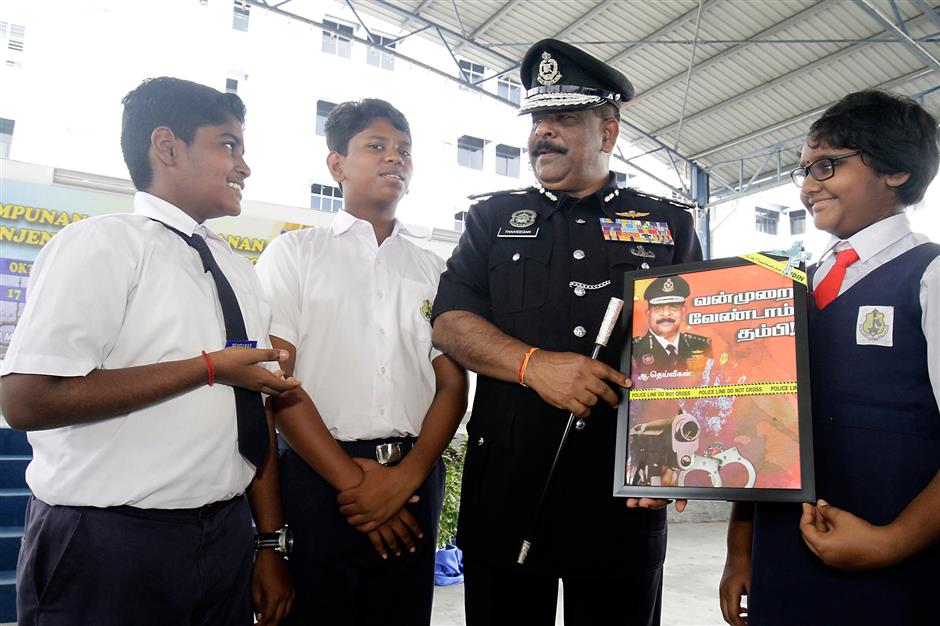 Comm Thaiveegan explaining the crime prevention poster to (from left) G. Arwin, S. Nazarus and B. Malarchelvi during the monthly gathering at the police headquarters in Penang Road . — Photo: CHAN BOON KAI/The Star

“Besides that, 686 grievous crime cases were recorded, which is a decrease from the 816 cases reported last year.

“The State Narcotics Investigation Department alsosuccessfully arrested 8,454 suspects and seized drugs worth up to RM190.6mil,” he said.

The number of drug addicts arrested under Section 39C of the Dangerous Drugs Act 1952 and Section 39B of the same Act stands at 306 and 607 respectively.

The Traffic Investigation and Enforcement Department statistics showed a reduction in fatal accident cases with 13 cases recorded but the total number of road accidents had increased by 5% due to the unpredictable weather in Penang.

Comm Thaiveegan advised his men to improve their services to the people.

“We must plant good values in the minds and hearts of the pupils,” he said.

Comm Thaiveegan said it was good that the pupils attended the police monthly gathering, so that they could observe the strict discipline of the members of the force.

“It is our duty to show, teach, educate and enlighten schoolchildren”, he said.

Benefits of working from home