Birdwatching for experts and novices

Winners of the bird race competition receiving their prizes from the organisers.

An annual event in the state’s tourism calendar since 1988, this year’s recently concluded edition was also one of the Revisit Pahang Truly Malaysia 2018 activities.

Tourism Pahang general manager Datuk Ishak Mokhtar said the objective of the event was to preserve nature and promote Fraser’s Hill as a bird sanctuary.

“Even though there are other bird-watching destinations in the country, Fraser’s Hill is still a preferred destination.

“This is because large species of mountain birds thrive comfortably in the most conducive habitats here and at certain times of the year, migratory birds make their presence felt, although briefly,” he said.

For the event, all that is needed from participants are patience, basic skills and knowledge in bird watching as well as a high interest and love of nature.

Ishak said the procedures as well as rules and regulation in the competition were simple.

Participants are given 24 hours to locate and view species of birds.

The winners are decided by the most number of birds recorded. 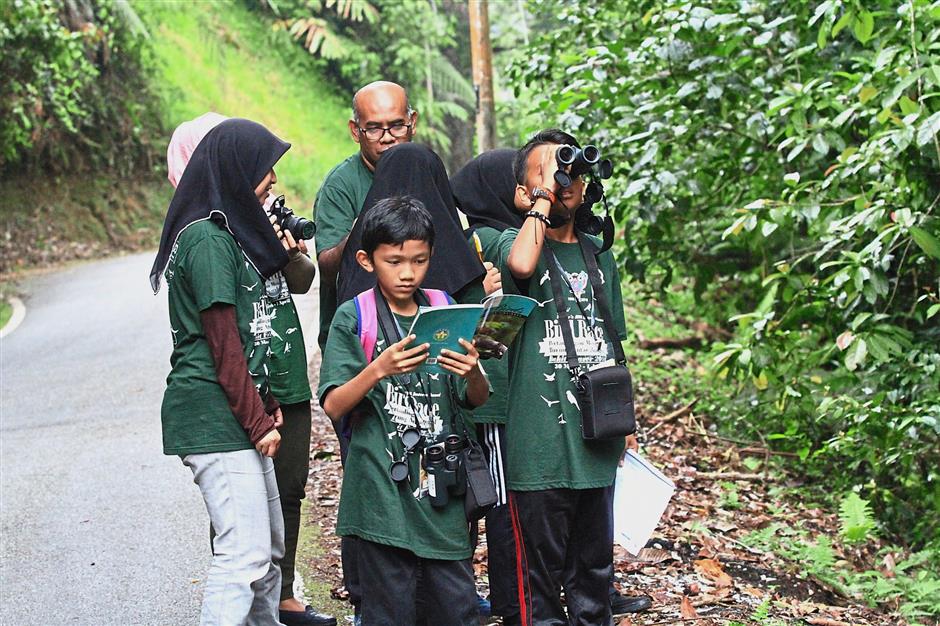 Students in action during the bird race competition.

The birds are found in every corner of the hill, even in the centre of the small town, due to the undisturbed environment.

Ishak said there were students who took part in the competition, proving that the event was not only for seasoned bird lovers but also for those who wanted to learn more about nature and the habitats of the numerous species of birds.

The competition was divided into three distinctive categories.

The advanced category was for the experienced birdwatchers who habitually return to Fraser’s Hill at every opportunity to do trial field runs.

The novice category was for those who had just taken up birdwatching out of curiosity or as an academic hobby while the local category was for locals who know the whereabouts of the birds in Fraser’s Hill.

In his speech, Azizan said the competition was a way to create awareness among the public on the importance of environmental conservation.

“The relatively undisturbed jungle and cool climate attract over 250 species of migratory and residential birds.

“The migratory birds fly to Fraser’s Hill from as far as Northern Siberia and the islands in north of Japan.

“They stop over here for a few months before flying south to New Zealand and Australia looking for warmer climate before making a reverse journey.

Fraser’s Hill was designated as an IBA by BirdLife International.

Fifty two teams of three participants each took part in the event.