Stench that will never go away

Rubbish, construction waste and other materials are heaped around the land that has been turned into a dumpsite.

SEALED windows of houses along Jalan Cenderuh 5 in Taman Bamboo, Kuala Lumpur, is a common sight as residents attempt to shut out the rancid stench from a dumpsite across the road.

Located adjacent to the Duta-Ulu Kelang Expressway (DUKE), the land is owned by a private developer and faces a row of 20 houses.

The site has been piled with construction materials, garbage and recyclable materials such as tin cans and plastic bags.

Tan Lye Ching, a resident there for 40 years, likened the stench to a rotting carcass.

She added that the dumpsite had been in existence since July last year.

“Garbage trucks go in and out of the area around the clock, sometimes dumping several times at 3am to 4am,” said the 50-year-old who got the brunt of the stench as she lived directly opposite the dumpsite.

“I called Kuala Lumpur City Hall (DBKL) and the Health Department but I was directed to speak to the Environment Department instead.

Another resident Tan Lea Peng, 46, said windows were closed the whole day as the stench was overwhelming. 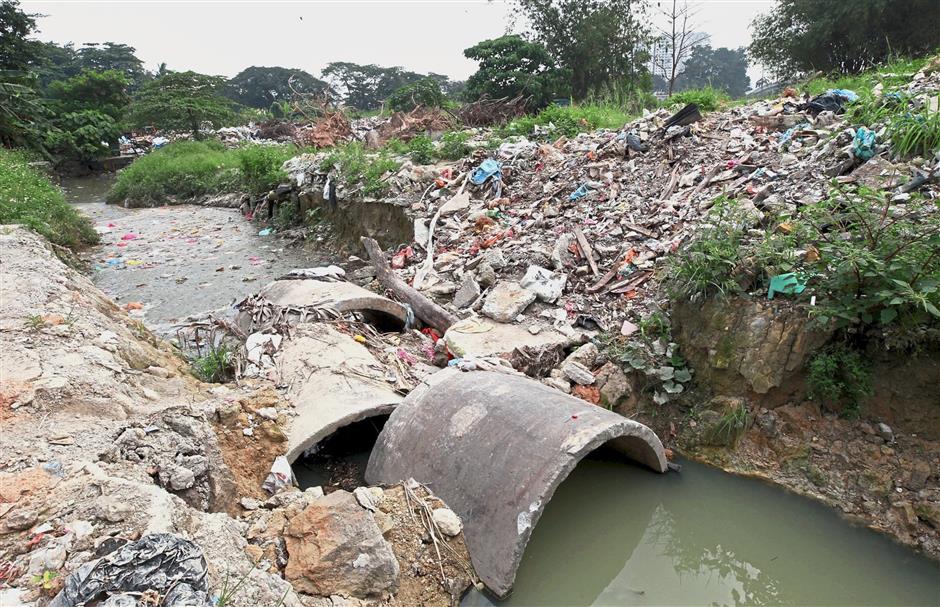 The monsoon drain on-site clogged with construction materials, floating green moss and sludge resulting in a backflow of water during heavy rains.

“When we open the door to leave the house in the morning, this stench gets into the house,” said Tan, adding that garbage lorries made at least two trips at 4am, and more than 10 trips altogether in a day.

Living in the area for 35 years, resident J. Yoges, 53, said the issue was compounded by the backflow of water from drains, causing minor flash floods in the area during heavy rain.

Entering the landfill, one can see the reasons for the flash floods.

A large monsoon drain on-site was clogged with construction materials while parts of the drain were filled with floating green moss and sludge.

“There are a lot of mosquitoes in the neighbourhood and this may be the breeding ground,” said Yoges, pointing to the drain.

“There were two dengue cases since last year and my daughter was one of the victims.

“I have attempted to contact the person in charge of the dumpsite for at least a month now, but have not got any response,” he said, questioning the landowner for not taking action.

Segambut MP Lim Lip Eng said even if the dumpsite was legal, he was objecting to it on behalf of the residents.

“It is located within the city centre, so near the busy Jalan Kuching and right in the middle of a housing area, affecting the lives of residents.

He called on DBKL to issue a hefty fine to the landowner.

When contacted, a representative of DBKL said the matter would be looked into.