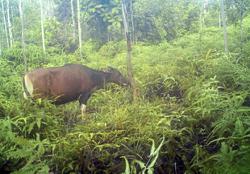 The orang utan is a victim of poaching and killing of endangered species in the state. — Filepic

KOTA KINABALU: Sabah needs professional investigators and informers to stop the killing and poaching of endangered species in the state.

Scientific director for HUTAN, a Sabah-based wildlife research and conservation non-governmental organisation, Marc Acrenaz, said there seemed to be an increasing number of cases involving the killing and poaching of endangered animals and this has to stop.

“Many years ago, we know that locals killed animals for food but now, we see that the trend has changed and people are poaching for the international trade and kill because of animal-human conflicts,” he said when contacted.

He said in these cases, including the recent one where an injured bull elephant eventually died because of dehydration as a result of the bullet wounds in its mouth, no suspects were identified.

“We do not know who killed or harmed these animals and this is because I think the authorities lack people on the ground,” Acrenaz said.

He said it was also because of the fact that there were no trained investigators specifically dealing with animal-hunting to follow up on the cases.

“We really need a strong team who knows what it is doing so that we can at least identify who the culprits are and bring them to justice,” he said, adding that then, the killings might stop.

For now, Acrenaz said the rangers on the ground were not enough to cover all the places where animals, especially endangered species such as the pygmy elephant, orang utan and pangolin roam.

“We have the government trying their best to preserve more forests and conserve animal species but what good is a forest without animals,” he said.

He said the three main reasons for poaching and killing were conflicts between landowners and animals (elephants), poaching of bush meat because of tourist demand as the tourism industry in Sabah was booming and the underground international trade for exotic meat or ivory.

“We want to be able to have our unique animals and biodiversity for as long as possible and this would not be possible if we are not able to stop the killing of our animals,” Acrenaz said.