CHRISTMAS arrived early in Quill City Mall Kuala Lumpur as it geared up for the festive season with an UnBULLievable Christmas Grand Launch.

The mall integrated the upcoming movie Ferdinand, which premieres on Dec 14, into its Christmas theme and transformed its main atrium into the Spanish village, Andalusia from a scene in the movie which features a unique Christmas floral theme.

Also, in the spirit of celebrating Ferdinand the giant bull with a big heart, shoppers will be able to experience a 3D Ferdinand at the Sunflower farm as well as a gigantic 12m-tall LED Christmas tree decorated with Ferdinand-inspired elements.

The launch kickstarted with an energetic cheerleading performance by an All Star cheerleading Team, My Dream followed by a group of charming Spanish dancers twirling and enchanting the audiences with grace. 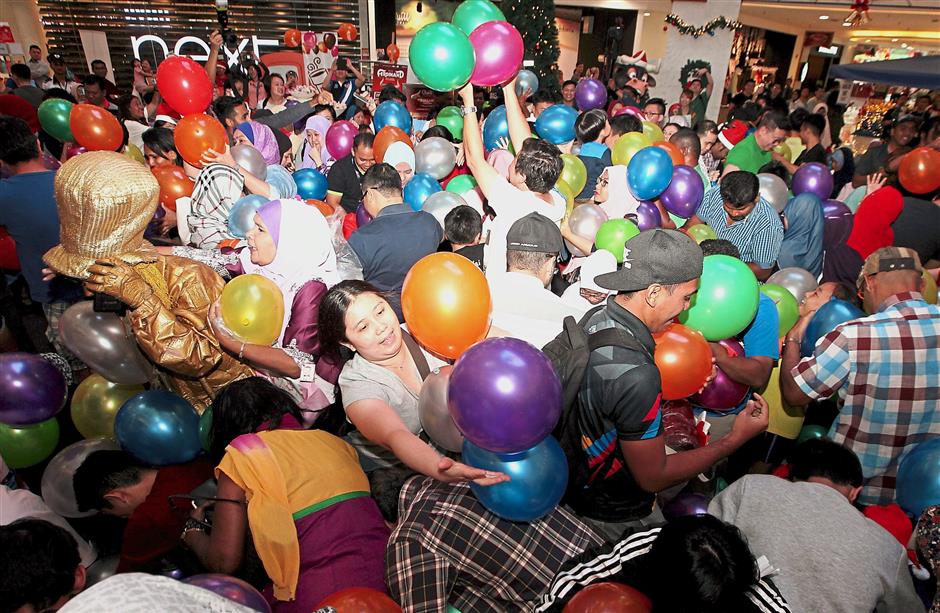 Shoppers collecting as many balloons as they can during the 10,000 Big Points Balloon Drop at the Main Atrium of Quill City Mall Kuala Lumpur.

“It is to show our support towards them, empowering and providing a platform for them to showcase their work and trade this Christmas,” said Cheong.

The charity bazaar will take place every Friday to Sunday, until Jan 1 next year at the mall’s First Floor Concourse.

Over 30 vendors selling cookies, apparel, accessories, cosmetics and homemade items will be available for Christmas shoppers.

Balloons attached to a Santa-on-stilts were released by Ong and Suriani to signify the launch of the UnBULLievable Christmas campaign.

It was followed by the presentation of gifts to a group of 30 single parents from the charity bazaar by Ong and Suriani as well as a Christmas song performance of Feliz Navidad by Malaysia’s youngest designer Amelia Lee.

As the closing highlight of the event, 10,000 Big Points Balloon Drop containing random amount of AirAsia Big points were released from a net above the mall atrium for the shoppers to grab.