Aiming for perfection in Kyudo

AS I squinted while aiming for the bullseye of the target less than 10m away, my right hand felt the tension of the bowstring that was pulled as far back to my ear.

Controlling my breathing, I was ready for the final shot only to find my left arm trembling slightly.

As I released, the arrow skewed towards the right and landed far from the bullseye, but still hitting the target.

My maiden experience with Kyudo was a pleasant and eye-opening one.

“You might have flicked the bow to the right a little while shooting.

“If you can perfect the Shaho-Hassetsu (principles of shooting), you will hit the target accurately,” said president of the Kuala Lumpur and Selangor Kyudo Club Jim Ng. 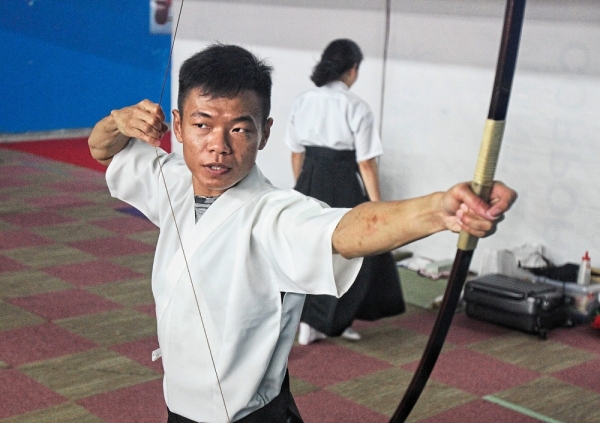 Ng demonstrating the strength of the bowstring.

Shaho-Hassetsu refers to the eight stages of shooting in Kyudo in that trainees must perfect in the art of the slow-paced Japanese archery, which is also considered a martial art.

“In Kyudo, we have to follow each step which includes the stance, stabling and straightening the upper part of the body, in preparation for shooting, drawing and releasing the arrow.

“Then, we keep the posture for a while and reflect on the shot.

“When these steps are perfected, one will get an excellent and accurate shot.

“If one misses the target, then it is probably because of incorrect techniques or a lack of focus,” Ng said. A glove protecting the hand that pulls the bowstring.

These steps cover both physical and mental awareness while firing an arrow, training the shooter to be more focused and disciplined.

The slightest mistake can result in one missing the target.

Bows and arrows were introduced during wars in Japan in its early years. However, it was in the peaceful Edo or Tokugawa period that archery was pursued as a martial art and developed into Kyudo, which means “the way of the bow”.

“Often, the target is placed 28m away and 9cm from the ground.

“It mimics the position of archers’ bodies during the wars then when they knelt on the ground,” Ng said.

Unlike compound or recurve bows, Kyudo bows are longer and do not boast advanced stabilising or aiming features. 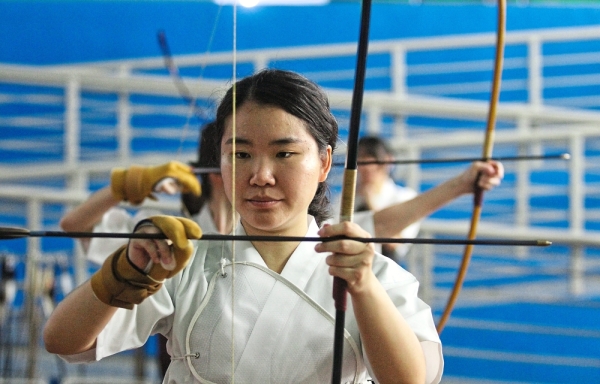 Shaho-Hassetsu refers to the eight stages of shooting which trainees must perfect to advance in the art of Kyudo.

Newbies are taught about Shaho-Hassetsu by using a wooden grip and a rubber band in the place of an actual bow during initial lessons.

They have to master the technique and learn about the stance before shooting an arrow.

While hitting the target in close proximity was no biggie, I realised that Kyudo takes time to master. 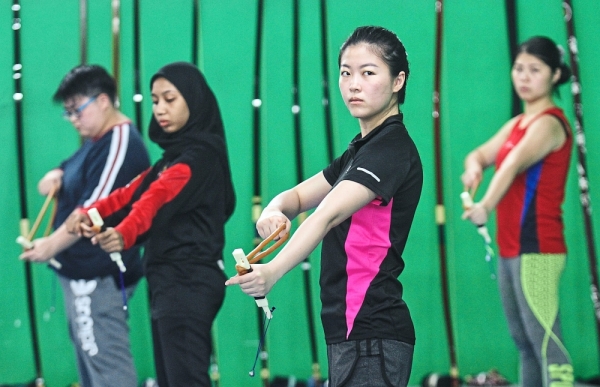 It requires immense concentration just to make a shot. An inexperienced person would definitely waver at the grip of the bow, making it harder to aim.

The brief introduction to Kyudo helped me understand more about Shaho-Hassetsu but it is not something that I can master in a short time.

However, seeing Ng do it with ease made me want to learn more about Kyudo.

“Whichever it is, the art is beneficial to anyone,” Ng said.

The club often sends representatives to Japan to learn more about Kyudo techniques and participate in events, such as the International Kyudo Federation Seminar.