ipabach200815 1... Main feature of the night, clarinet soloist Andrew Simon (foreground, centre, standing) enchanting the audience with his instrument as conductor Eugene Pook (right) conducts the others during PSPA International Ensembles A Night of Musical Kaleidoscope - From Bach to Yiruma at Syeun Hotel on Aug 20.

FOR one night, the Perak Society of Performing Arts (PSPA) International Ensemble put together an orchestral performance that entertained audiences with several hours of classical splendour.

It was themed “A Night of Musical Kaleidoscope - From Bach to Yiruma”.

Formidable musicians from Malaysia, Singapore, Hong Kong, Canada and the United States took to the stage in groups of six to 13 and flawlessly played their pieces.

Some of the classics featured were JS Bach’s mesmerising and soothing Brandenburg Concerto No. 3 in G major, Antonio Vivaldi’s Violin Concerto Op. 8 The Four Seasons and Ennio Morricone’s Love Theme from Cinema Paradiso. Sultan Nazrin Shah (fourth from left) sitting in the audience.

Proving that classical music is not their only strong suit, the performance also included South Korean composer Yiruma’s River Flows in You, which has become increasingly popular with today’s youths, as well as Taylor Swift’s Love Story and Coldplay’s Viva La Vida.

The highlight of the night was the introduction of American clarinet soloist Andrew Simon, who enchanted the audience with his flawless flying fingers technique. Taking in deep breaths for the dramatic movements, Simon easily blew a wide range of notes in different variations rapidly in Rossini’s Introduction, Theme and Variations.

His subsequent encore performance, Summertime, started at a slow, romantic pace with hints of melancholy and longing before building up to an upbeat melody.

Kinta Valley Symphonic Society music director Eugene Pook, who appeared at the second half of the show after intermission, conducted the ensemble. 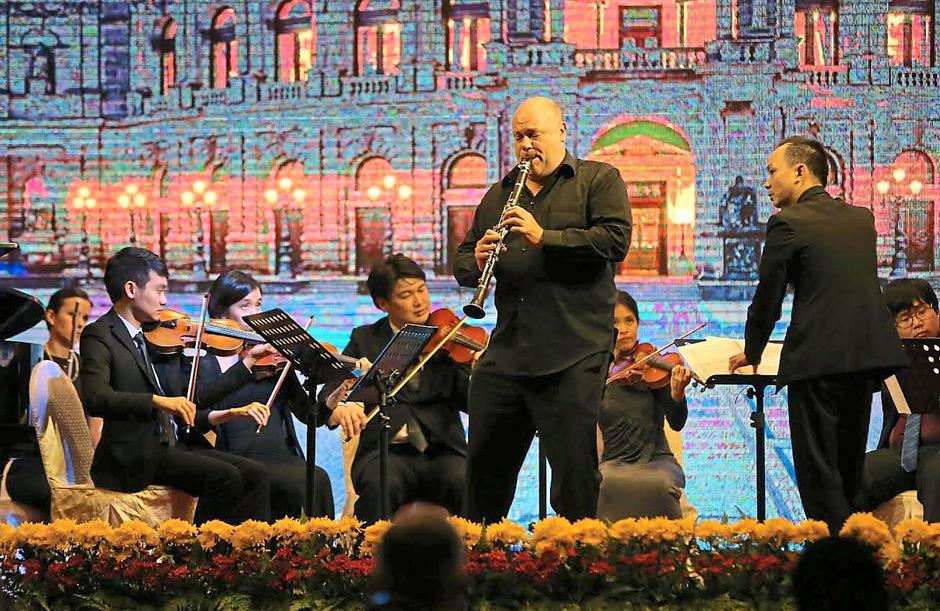 Earlier, PSPA president Datin Rosalina Ooi-Thong said putting together the performance had been a “crazy roller coaster ride” that required time, money and energy to make the night a successful one.

“Our PSPA International Ensemble is a most special project, as it brings musicians from diverse cultures to make music together, and more importantly, experience Malaysian life.

“These musicians also inspire younger ones through workshops and encounters, much like our other projects to bring in experienced facilitators to share their knowledge with our students,” she said, referring to the society’s annual Junior Associate Conference in her speech before the performance at Syeun Hotel, Ipoh last Thursday.

Ooi-Thong added that the next conference taking place on Malaysia Day will feature a theme called “Jazz and Jealousy” – a combination of jazz music and William Shakespeare’s tragic play Othello. The PSPA International Ensemble is the resident musical ensemble of the society. It is renowned for its innovative concert programming and versatility.

PSPA, a non-profit organisation formed in 1996, aims to be a catalyst for the enrichment, growth and practice of the performing arts in Perak.

The society’s royal patron Sultan of Perak Sultan Nazrin Shah was also present to witness the display of international and national talents during the performance.