Students set up Cor Amoris to raise funds for the needy

STUDENT charity body Cor Amoris has a long-term plan to help the needy and gain invaluable experiences for itself along the way.

The club, comprising 14- to 16-year-olds from St Joseph’s Private School in Kuching, raised nearly RM5,000 last month. It conducted photo shoots in the lead up to Valentine’s Day and sold cookies and cakes at The Spring Shopping Mall before Chinese New Year.

The club donated all the proceeds to the Sarawak Children’s Cancer Society.

“It was a lot of fun even when we were organising it. Turns out planning takes lots of time,” said Germaine Cassandra George, the club president.

A year ago, she visited the cancer ward at Sarawak General Hospital. “I saw all these kids at the cancer ward with their families. Many were from different parts of Sarawak. Some parents had seven or eight kids back home, but were here just to take care of one child,” Ong said.

She began talking to her classmates about what she saw and how she felt. Ong and Cassandra then approached the school principle about forming a club.

“We were told to join another club, which we did. But when we were there, we felt that club was more of a self-confidence building thing and not what we wanted to do, which was to raise funds,” recalled Cassandra.

At the start of this school year, the duo – who had by now roped in more like-minded students – approached the school principle again.

They explained their aim and plans, which included organising blood-donation drives and organ-donor pledging events.

Their proposals were accepted and supported. “In fact, it was our principle who came up with the name Cor Amoris, which is Latin for heart and love,” Cassandra explained. 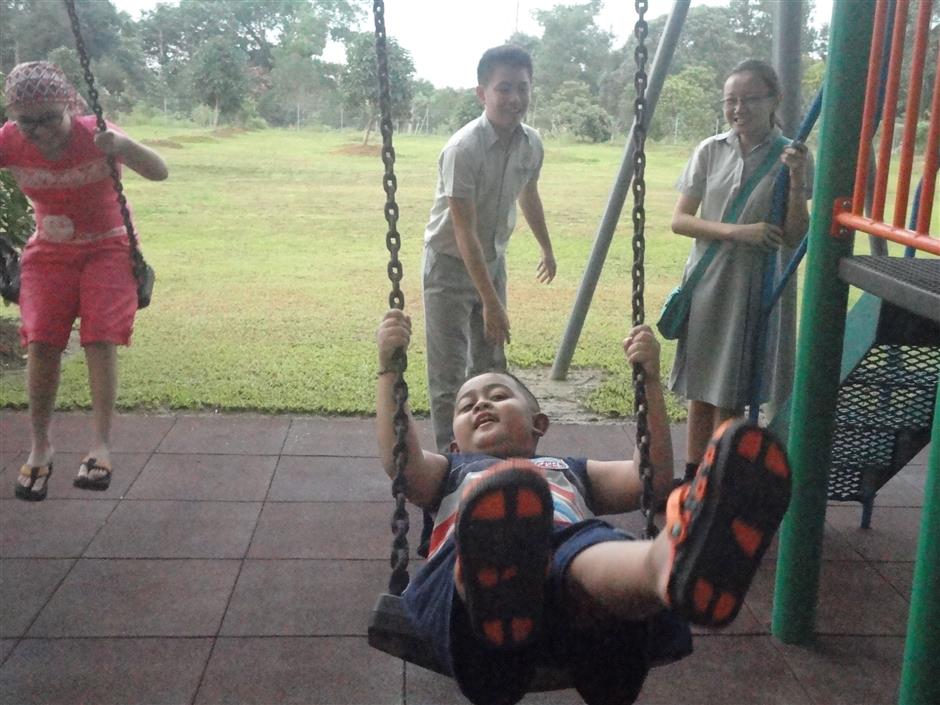 The club, which has about 40 members five weeks in, meets up every Wednesday evening at school to talk about plans.

On March 21-22, the club will hold a carwash with proceeds going to the Kuching Autistic Association.

“We are hoping to raise RM1,500, charging RM15 per car,” said treasurer Aloysius Pang, who sees his participation with Cor Amoris as a step towards fulfilling his ambition of becoming a psychologist.

Looking ahead, the club aims to run a booth at Sarawak Association for the Welfare of Intellectually Disabled Children’s annual sale. They have also talked about organising a “gotong royong” clean-up at the Cheshire Home.

But its biggest undertaking lies at the end of the year. It is a trip to visit a refugee camp at Chiang Mai, Thailand. It was proposed by Ong.

“We want to see how people live there. Maybe we can offer some help. The camp is mostly for refugees from Myanmar. It’s along the border,” Ong started explaining, but quickly turned her attention to the home of a less fortunate family she visited recently.

“It was a dad living with this son in a wooden house. The wife is sick and has been in hospital. The family trades recyclables for a living. We were there as volunteers to help clean up the place. It was in a really bad condition.

“I tried to stay positive thinking about how this (clean-up) can help them. Children can’t study in situations like that,” Ong said.

Cassandra had similar stories to share about why they started Cor Amoris. She talked about the sense of community whenever she returned to her dad’s kampung in Saratok, about 300km from here.

“It feels a lot more like a integrated community there. In the city, you hardly know your neighbour. When my granddad passed away, everybody came.”

The trio agreed Cor Amoris should be aimed bringing that sense of integration back into the urban environment. Indeed, charity starts at home.