Project expected to be completed in 2016

By Story and Photo ZAZALI MUSA Big development: Part of Sungai Segget has been opened under phase one of the multi-billion ringgit of the Johor Baru city centre transformation project.

DESARU: The phase one of the multi-billion ringgit Johor Baru city centre transformation project is expected to be completed in the third-quarter of next year.

Iskandar Regional Development Authority (Irda) chief executive officer Datuk Ismail Ibrahim said the project kicked off with the opening of Sungai Segget in the last-quarter of 2014.

“The opening of the river marks the start of the ambitious project to transform the JB city centre into a vibrant place within the next five to seven years,” he said.

Ismail said this in a press conference after witnessing the signing of agreement between Gait Rungkai Sdn Bhd with Ronser Bio-Tech Sdn Bhd and CP Coatings Sdn Bhd.

Gait Rungkai was represented by it chairman and managing director Dr Nor Azhar Mohd Arif while Ronser Bio-Tech was by its chairman Woo Ming Foong and CP Coatings by Ling Liong Lai.

Under the agreement, Gait Rungkai would be appointed as the distributor of lake and river technologies using both Ronser Bio-Tech’s and CP Coatings’ patented technologies.

Ismail said the Federal Government had allocated about RM240mil to rehabilitate, rejuvenate and beautify the river under phase one of the project including the construction of the centralise sewerage treatment plant (CSWP).

With the CSWP, the water quality in the 1.45km river would improve through reducing pollutant loads to the Straits of Tebrau.

“The water quality level will be elevated and sustained at Class II by the third-quarter of 2016, which allowed marine life to thrive.

The success of the river rehabilitation project will be the focal point of the entire redevelopment project of the city centre,” he said.

Sungai Segget which flows along Jalan Wong Ah Fook in downtown Johor Baru was covered in 2005, a short term measure at the point of time to ensure odour and pollution of the river was contained above the ground. 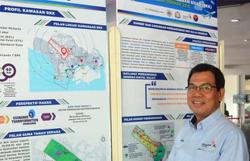