The route to the geyser is also a particularly scenic one along the Rhine. — Photos: KARIN WILLEN/dpa

The world’s highest cold-water geyser is to be found in Germany, 613km from the source of the River Rhine.

And visitors won’t just find the fountain of bubbling water gushing out of the ground, but also lots of information about volcanic activity in the Eifel mountains, displayed in fascinating installations and dioramas.

At the Geyser Centre, about an hour from the city of Cologne, you can learn about how the carbon dioxide that powers the fountain on the Namedy Peninsula on the Rhine comes from the huge magma chambers of the Laacher See volcano. The volcano last erupted 12,900 years ago, transforming vast areas into a lunar landscape with devastating flows of lava and ash.

“Today, the carbon dioxide here, like hot springs elsewhere, shows us that the Earth’s interior has not yet come to rest,” explains Ralf Schunk, scientific director of the Geyser Centre. But there’s no need to worry about a volcanic eruption: “It could take several thousand years for the magma chambers to fill up again,” reassures the geographer.

So far, the cold-water geyser is fully under control. In Andernach, the carbon dioxide drives the groundwater to gush 60m above ground from a depth of up to about 350m. However, this is not an entirely natural spectacle. The fountain can be switched on and off, so to speak. A gate valve is pushed forward, and silence reigns... at least above ground. 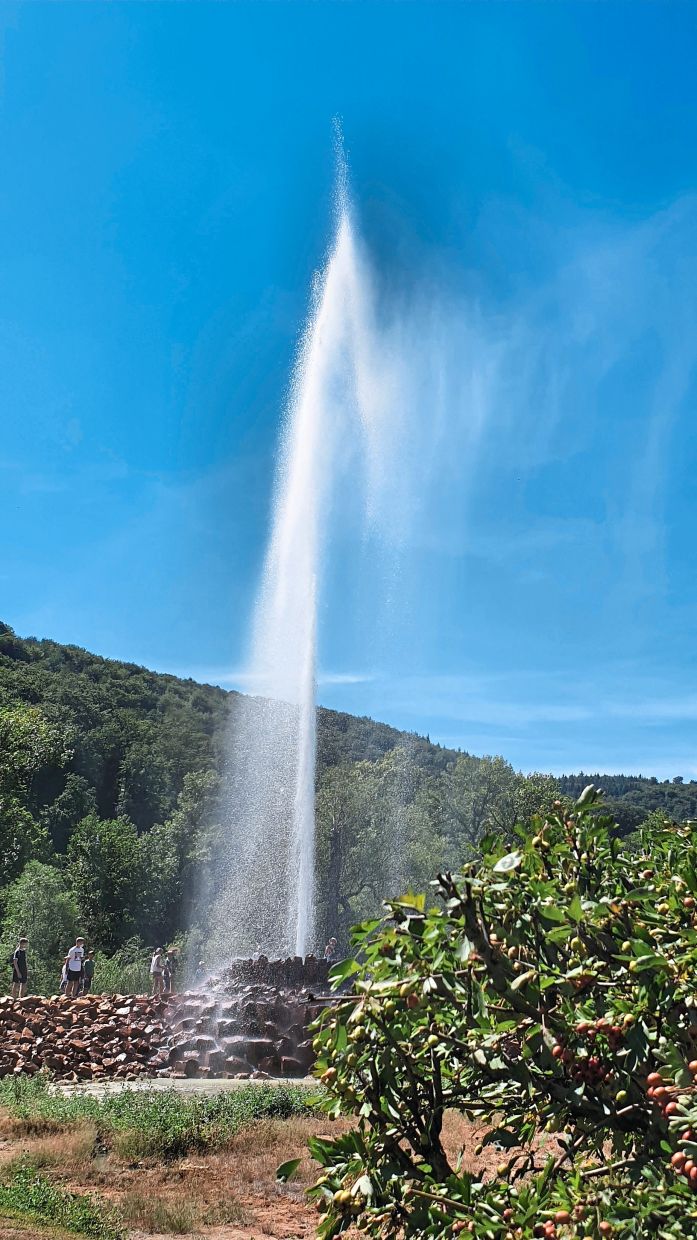 Volcanic carbon dioxide drives the groundwater of the Andernach cold-water geyser up from a depth of a good 350m.At the beginning of the 20th century, deposits of carbon dioxide were discovered here on the Rhine peninsula. In the waters near the peninsula, the CO2 bubbles called mofettes were visible. Even today, volcanic gases rise to the surface in the Eifel mountain range and Rhine valley, especially where the Middle Rhine Valley borders the Eastern Eifel.

The search for mineral water led to the first drilling at Namedy Peninsula in 1903, which brought the geyser to life. Mineral and medicinal water as well as carbonic acid were industrially extracted here.

But the carbon dioxide extraction became less profitable and eventually the well was closed. Then, about a century later, it was drilled again. This time for tourism. Since 2006, the “highest cold-water geyser in the world” has been gushing upwards again, every two hours for 12 to 15 minutes. Its height and rarity even earned it an entry in the Guinness Book of Records in 2008.

There are actually higher geysers around the world: The Giant Geyser in Yellowstone National Park (in the United States), for example, sends water 83m into the air. But the fountain in Wyoming (US) is a more rare sight and, like all the other thousand or so geysers around the globe, it is hot water vaporised by magma. In Andernach, however, CO2 pushes the water upward, and it is at best slightly tepid.

“The pace is set by the gas-water mixture that keeps forming in the earth,” Schunk explains. “If its pressure exceeds the weight of the drilled well filled with water, the gas dissolves. It rises up the well pipe, pushing the water there ahead of it... and the geyser spews again.” The eruption is only prevented at night, at high tide and in winter.

But when the fountain is active, visitors get to witness a natural spectacle normally associated with more exotic destinations. The steamer “Namedy” departs from the pier at the museum to take visitors to the site. The crossing to the geyser peninsula takes 15 minutes.

After a 200m walk past rare black poplars, guests reach the eruption site, which is surrounded by basalt stones. The iron-rich water has coated the stones a rusty red. The record-breaking fountain builds tentatively and evolves into a mighty hissing geyser, before ebbing to bubbling carbon dioxide.

What Andernach offers visitors today is a long-negotiated compromise between nature conservation and tourism: Since the mid-1980s, the Namedy Peninsula with its 21ha floodplain forest has been a nature reserve, serving to protect the habitat of rare animal and plant species. The number of passengers allowed on the boat basically regulates the number of visitors to the natural spectacle so that the primeval forest can be preserved. – dpa

'Workcations' are no substitute for a real vacation, which should be a time to rest

Would you fly on a plane with just one pilot in the cockpit?
Africa’s heritage sites are in peril as planet heats up
Malaysian solo traveller hopes to quash stereotypes of women being the weaker sex
These Malaysians want more people to give backpacking a chance
Germany’s Dresden is one of the hottest destinations to travel to in 2023
Here's a basic safety checklist for folks who prefer to fly private
Airbnb is making it easier for people get started as hosts
Taiwan's largest airline company will bring in bigger aircraft to meet demand
Siem Reap reinvents itself to attract more high-value tourists
Quaint English villages and towns to visit outside of London