Whether it's rubber tapping, getting muddy in the padi fields, or foraging for your dinner, there's lots of interesting things to do in Kampung Labu Kubong, Perak. Photos: The Star/Ming Teoh

When we were told that we’d be doing a kampung homestay during a recent trip to Kuala Kangsar in Perak, I was anticipating having to spend the night in an attap house without electricity or running water.

However, we were in for a surprise when the bus arrived at Labu Kubong, a village less than 20km north of Perak’s royal town.

The whole village had turned up to welcome us – members of the media, tour agents and representatives from Tourism Malaysia and Destination Perak. An assortment of local kuih and drinks were served at the village community hall, and we were introduced to our host families and housemates.

My housemate for the trip was Kak Wawa and our host was a family of four – Mak Angkat (foster mum), Yah Angkat (foster dad) and their two daughters. We waited anxiously for the family to bring us to their home where we would be spending the night.

The homestay the writer stayed at was comfortable and there was hot water in the bathroom.

Our foster sister Shahirah soon drove up in a car and started loading our bags into the car boot. We were surprised to discover that our “kampung home” was actually a huge bungalow with a fancy verandah and garden. Our room was not air-conditioned but we had a fan and there was hot water available, too.

I heaved a sigh of relief at that.

All the villagers had opened up their homes to the over 50 participants in the media trip. Some were traditional kampung-style wooden houses, but many had been renovated into modern brick houses. The village headman, or penghulu, had a traditional house that faced a padi field.

The afternoon's activities: catching fish with our bare hands, playing netball, and getting muddy was at this padi field in front of the penghulu's house.

That evening, some of us had our first experience catching fish using just our bare hands in a nearby padi field. It was very muddy, but everyone joined in the fun and got down and dirty. Some of us even played netball using the muddy field as the court! Even when it started to drizzle, most of us stayed on to continue the game, getting wet in the rain.

Later, while the more adventurous ones went swimming or bathed in the canals, the rest of us returned to our homes to get cleaned up before dinner time.

The villagers at Kampung Labu Kubong sure know how to feast. Dinner on the first night included roast lamb.

Kampung folk sure know how to feast, as evident in our dinner at Labu Kubong. It was an elaborate affair with roast lamb and other delicious fare.

The penghulu entertaining media members with anecdotes at the community hall during dinner time.

While we dined, traditional song and dance performances were presented by the talented villagers, and the penghulu entertained us with amusing anecdotes through the night.

Life starts very early in the morning for the villagers, although we weren’t woken up by the sound of roosters crowing as we had expected. After breakfast, we were brought to a plantation to try our hand at rubber tapping. It was not as easy as it looked when the rubber tapper demonstrated.

There was a certain way to hold the knife and a certain diagonal angle to cut into the bark where the latex vessels are, without damaging the tree. The latex sap then drips out into a small cup tied below the incision.

We were told that after around six hours, the latex stops flowing, and the cups are collected and taken to the nearby processing area.

One of the villagers demonstrating how to tap rubber from a tree. Visitors can also try it out for themselves.

We strolled along tree-lined kampung roads to a honey bee farm next. A bit apprehensive at the thought of encountering bees, we were surprised and relieved to discover that these ones, known as kelulut, were stingless.

There are over 30 species of stingless bees in Malaysia, the beekeeper told us. Madu kelulut (stingless bee honey) contains more vitamins and minerals than regular honey and is often used for its medicinal properties, he said.

We came to a shaded area where the wooden bee houses were. The beekeeper removed the lid from one to reveal a colony of bees in their intricate hive with hexagonal cells of beeswax known as a honeycomb. It was glistening with gold liquid.

He scooped up a bit using a small straw and asked if we’d like to taste it. Sucking lightly at the straw, we discovered that the liquid was more runny than regular honey and it had a sweet-and-tangy taste.

We continued our excursion on foot, passing by several kampung houses and farms. When we came to an open field, one of the villagers who had brought us there (we called him Pakcik) told us it was time to work for our lunch!

We looked at the tall grass and vegetation hesitantly. We were worried about encountering leeches, snakes, monitor lizards and other creepy crawlies.

We were told that we had to harvest some pucuk paku (edible ferns) and learn to make rendang paku for lunch. OK, that was motivation enough!

We made our way through the thick vegetation, plucking the pucuk paku which grew along a small stream. The harvest was loaded into a basket tied to the back of a motorbike and transported back to the kampung. The “labourers for the day” went back on foot while a few hitched a ride in a truck.

Mats were spread on a grassy area in front of the penghulu’s home, facing the padi field. On the mats, sat a few of the villagers who were preparing to demonstrate how to make traditional Malay handicrafts.

Helping to prepare ingredients to make lunch at the penghulu's home.

While a few of us helped to prepare ingredients for lunch, the rest joined tried their hand at making decorative kites, baskets, and banana leaf moulds for kuih limas.

The fragrance of the paku rendang and other traditional dishes drifted toward us, making it difficult to concentrate!

I selected what looked like the simplest task to tackle – making the moulds for kuih limas. A lady showed us how to fold banana leaves around a wooden block to make little square containers for the moulds. It actually wasn’t that easy to do.

A villager demonstrating how to make a wau.

The wau that we made ourselves.

Meanwhile, Pakcik demonstrated how to make wau out of coconut skewers and coloured paper. After we completed our handiwork, he hung them up to dry.

Elsewhere, a few women were weaving paper baskets. These were painted with pretty colours and decorated with cloth flowers. This was the most intricate task for the day as it took some skill to weave the basket.

Learning to make decorative baskets from wire encased in paper. The weaved baskets are then painted and decorated with cloth flowers.

If you’re interested in checking out the village, do take note that activities vary according to season and weather. For example, there’s the padi harvesting season (where you could possibly help out in the fields) and Badang Malaysia – a local strongman competition.

For more information, check out: https://www.facebook.com/labukubonghomestay/. 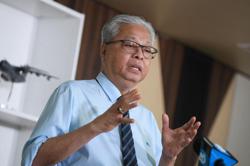