Hannah Waddingham wore Dolce & Gabbana with bedazzled high top sneakers on her feet Monday while Elle Fanning went Old Hollywood in a gown designed by Sharon Long of her show, The Great, as glamour returned to the Emmys in sticky Los Angeles humidity.

Waddingham, from Ted Lasso, showed off her comfy white shoes beneath her corseted strapless pink look.

Fanning, her hair in a pinned-back bob, said she wanted to honour the creatives on her show that provided her with her first Emmys nod. Fanning's look was black and pink, embellished at the chest.

"I’ve always been inspired by the Old Hollywood glam of the 50s,” Fanning said.

Sheryl Lee Ralph of Abbott Elementary had a fashion faux pas before arriving at the Emmys.

"A designer gave my co-star and me the same sketch for the same gown,” she said, having discovered it on set when Lisa Ann Walter showed Ralph what she was wearing to the awards.

"Up until five days ago I had no gown so Brandon Blackwood stepped up. He was in Japan and started rendering the gown on his Pacific flight,” Ralph said.

Ralph was resplendent in a black velvet strapless gown with an orange underside and a slit to her upper thigh. She carried a tiny orange purse. 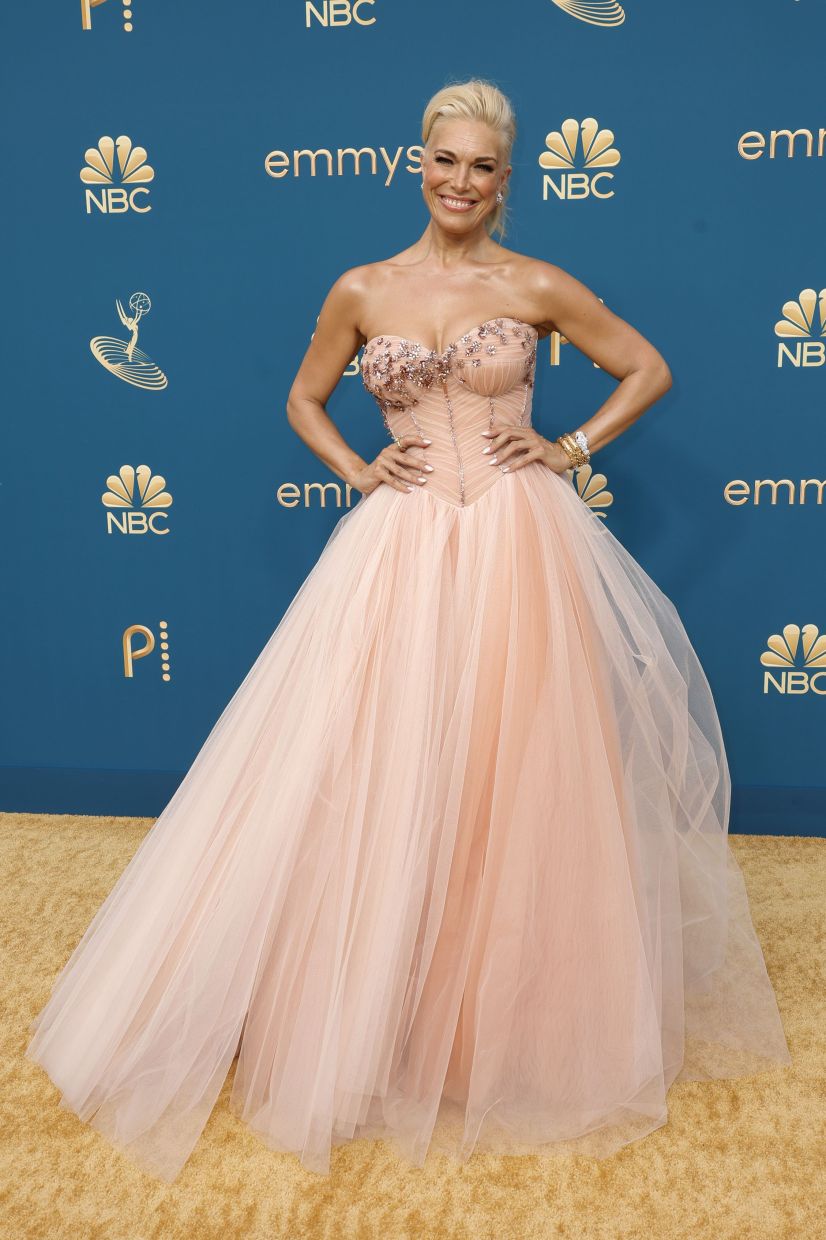 Hannah Waddingham looked pretty in pink for the Emmys. Photo: AFPThe stars went all out. Zendaya, working with her stylist Law Roach, was in a classic black strapless corset look with a full skirt and dainty bow at the waist. It was Valentino, and she was dripping in Bulgari jewels, including a fresh, young white diamond choker with a center, 4.45-carat stone at the center. She, too, had pockets.

Connie Britton was in a goddess gown by Monique Lhuillier in a soft pink, a cape like effect at the back.

Britt Lower, from Severance, donned a Venetian beaded gown in gold with matching elbow-length gloves. There were cut outs up top and thin embellished straps.

"It felt like I wanted to wear outer space. I have an appreciation for fabrics, my mom was a home economics teacher. I feel great in it,” Lower said.

People's style and beauty director Andrea Lavinthal, said pink carried the night, though lots of other colours brightened up the carpet.

"Pink seems to be continuing its dominance as the red carpet colour of choice. There’s just a lot of stars who are gravitating towards different shades of pink,” she said.

Not Rachel Brosnahan. She stood out in a plunging Pamella Roland column gown in beautiful violet. It was adorned with tulle and pearl floral bow appliques from the designer's Autumn/Winter 2022 collection.

Laverne Cox and Himesh Patel helped kick off the parade of fashion, she in a bold black armor-esque Jean Paul Gaultier Couture mini and he in a white print tuxedo jacket, eschewing the usual evening black.

"I’m quite warm, I’m in a three-piece suit. I love this suit, but I wasn’t expecting the heat,” Patel said. Natasha Rothwell of The White Lotus chose red for a gown with balloon short sleeves and a hot commodity on fashion carpets – pockets!

It was custom silk taffeta from Safiyaa.

Megan Stalter also went for red in a sheer dress that celebrated her curves. Jen Tullock of Severance was in the red zone, a thigh high slit and structured sleeve number by Thierry Mugler, worn with drop pearl earrings.

"I’m such a fan of his line. It’s elegant but still has a sense of humour," Tullock said.

Stalter, from Hacks, was in burned out velvet by Norma Kamali. She had a faux red rose pinned between her breasts.

"It took my breath away and my words. It’s kind of a sexy dress. It’s wild like me,” she said.

Jung Ho-yeon, the it-girl and Louis Vuitton ambassador from Squid Game, wore an all-around, multi-coloured figure-hugging look from the brand. It was custom in a tweed design with all-around sequins. Her jewels were Vuitton, too.

"I still can’t believe it. It hasn’t sunk in yet, but I’m just going to enjoy the day and cherish the moment,” she said of her nomination.

Reese Witherspoon went for blue and sunglass-worthy bling in blue sequins. Around her neck was a knockout aquamarine, blue zircon and diamond choker from Tiffany & Co.

Another refreshing surprise for Lavinthal? The men who dismissed black for all-white tuxedos, including Nicholas Braun from Succession in a double-breasted tux from Christian Dior. Andrew Garfield also went for white, along with Seth Rogan. There are always ways to stand out for a red carpet event. Case in point – Mark Indelicato. Photo: ReutersSpeaking of white, Jean Smart decided on it, too, with an elegant collar that fell off one shoulder.

Ellie Saab designed Kerry Washington's short draped dress with a long overskirt and a riot of organza lilies on one shoulder. Washington's black tights had some scratching their heads.

"I thought we'd seen every kind of cutout on the red carpet, but a bellybutton cutout was something new,” Lavinthal said.

Among Lavinthal's highlights was Lily James in coppery Versace.

"It was very much 2022, but it could have come right off a 90s runway with the chainmail and the sculpted cups,” she said.

Smart's gown was made by Christian Siriano, as was the white look of Laura Linney. Robin Thede also wore Siriano in stunning pastel blue, while Jerrod Carmichael went furry in a long, white fox fur coat.

Carmichael laughed at the heat and humidity.

"This was Puff Daddy’s coat. He wore it in a video,” the Saturday Night Live comic said.

Carmichael was shirtless under the fur and wore a sunburst platinum necklace. His black satin pants were accented by the top of his white underwear peaking out. He was sockless in his black loafers.

Another Siriano fan? Melanie Lynskey from Yellowjackets. Hers was a mint green with sheer overlay that made her feel "half princess and half bad (expletive)”.

Of the designer, she said: "He's the sweetest man alive and I adore him. I feel like he made something that was for me, for my body.”

"The standout looks on this year’s red carpet declared a turning point in celebrity style hinted at by the recent Venice Film Festival: The craziest and loudest outfit is no longer the best. Instead, stars are gravitating towards real elegance, even classicism," she said.

She pointed to Zendaya, who is often a risk taker.

Similarly, Fanning was in a "very classic 1950s-ish couture dress with an old school coiffure,” she said.

Another of her highlights was Issa Rae in a fitted, flattering Sergio Hudson look that was on his runway Sunday (Sept 11). But her absolute favourite was Lizzo in her "gorgeous red Giambattista Valli gown – a refined, glamorous statement that dazzles”.

Among other standouts was Ariana DeBose in Atelier Prabal Gurung. It was a lilac silk chiffon hand-draped with a cape.

Colman Domingo of Euphoria was already a winner as he walked the carpet. He earned an Emmy for guest actor in a drama series at the earlier creative arts awards.

"I’ve been celebrating all week long to the point where I had to wake up and take a couple of ibuprofen,” he said.

Domingo carried a platinum-studded battery-operated fan in an attempt to ward off the oppressive humidity, unusual for Los Angeles.

Mark Indelicato was in the red club, sort of. Indelicato's hair was bright red and his black tux sported long split tails like a train.

And more of the men? Phil Dunster of Ted Lasso went for burgundy tux with black lapels, though his Lasso co-star Brett Goldstein stayed with black.

Emily Heller, meanwhile, went in a different direction. She had a "Kick Me” sign on the back of her short floral dress, and a bit of toilet paper stuck to one shoe. – AP 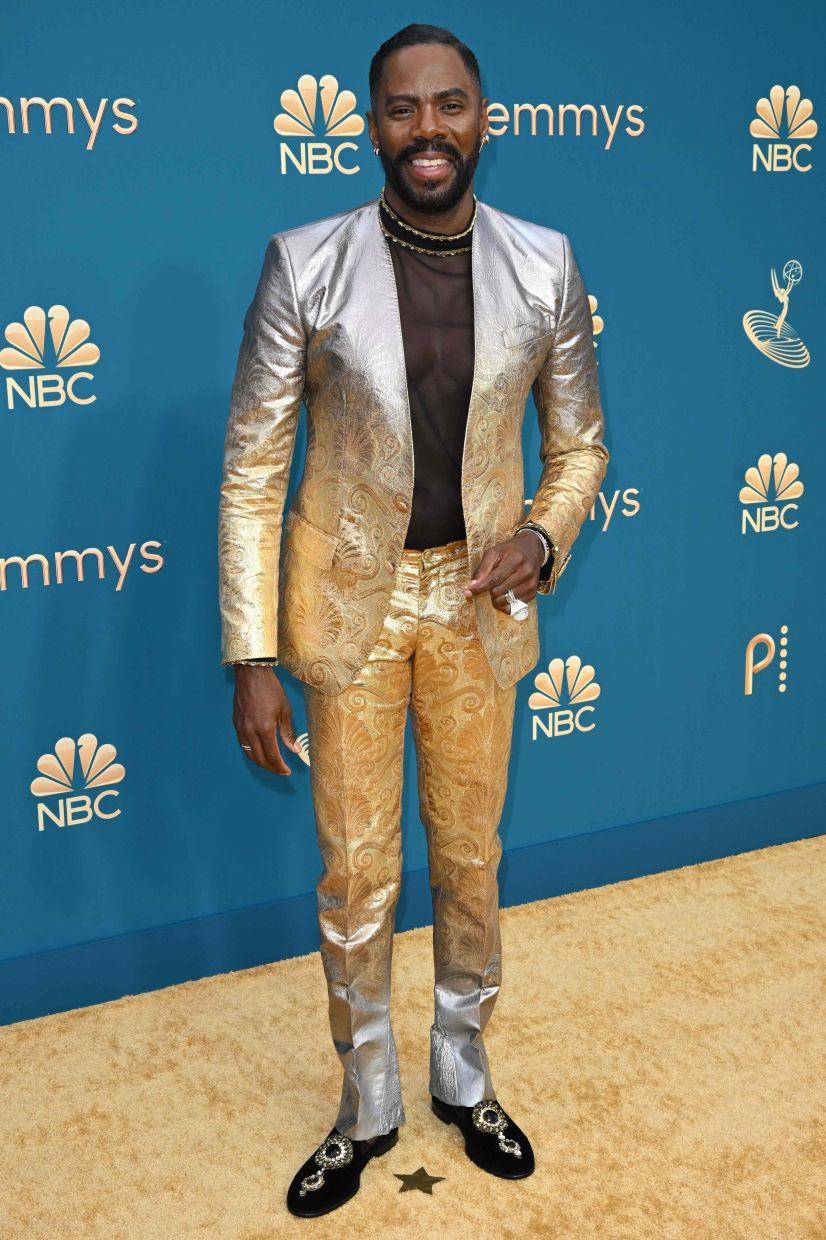 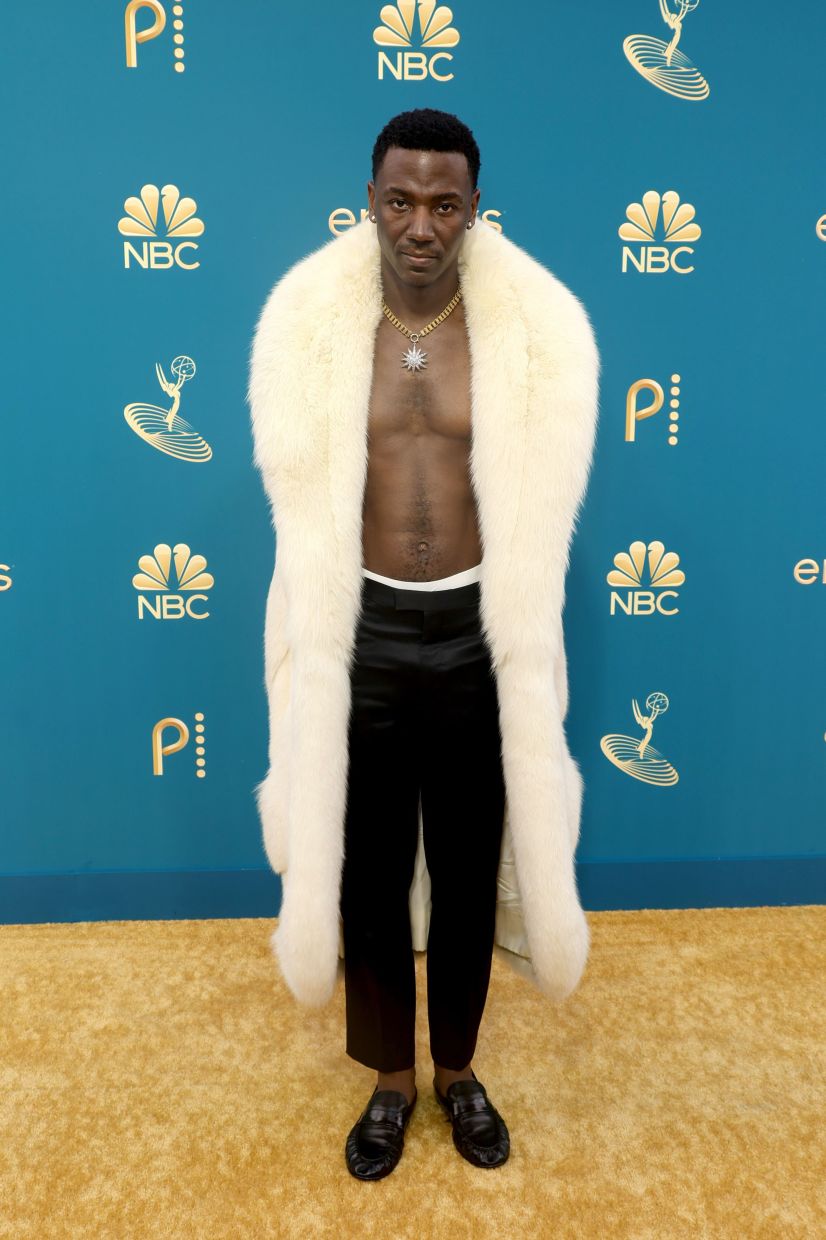 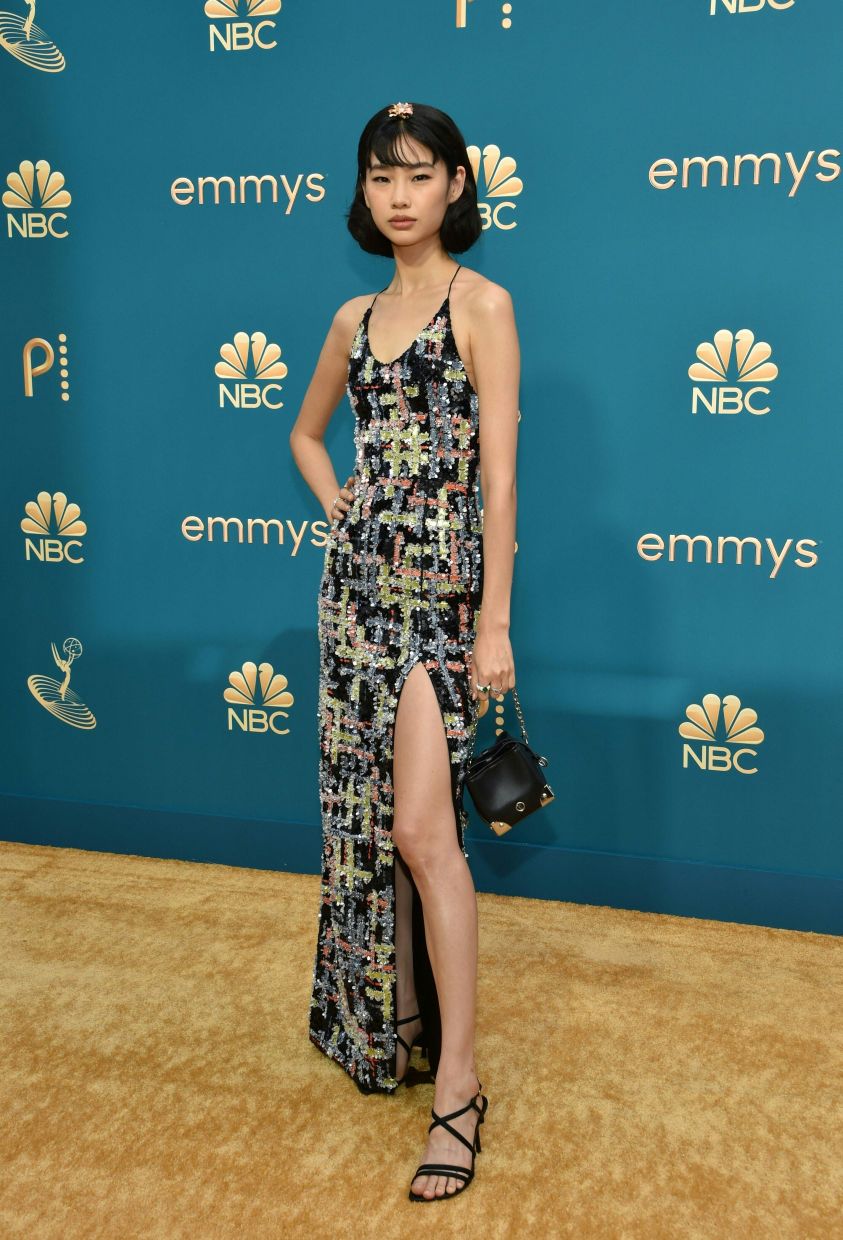 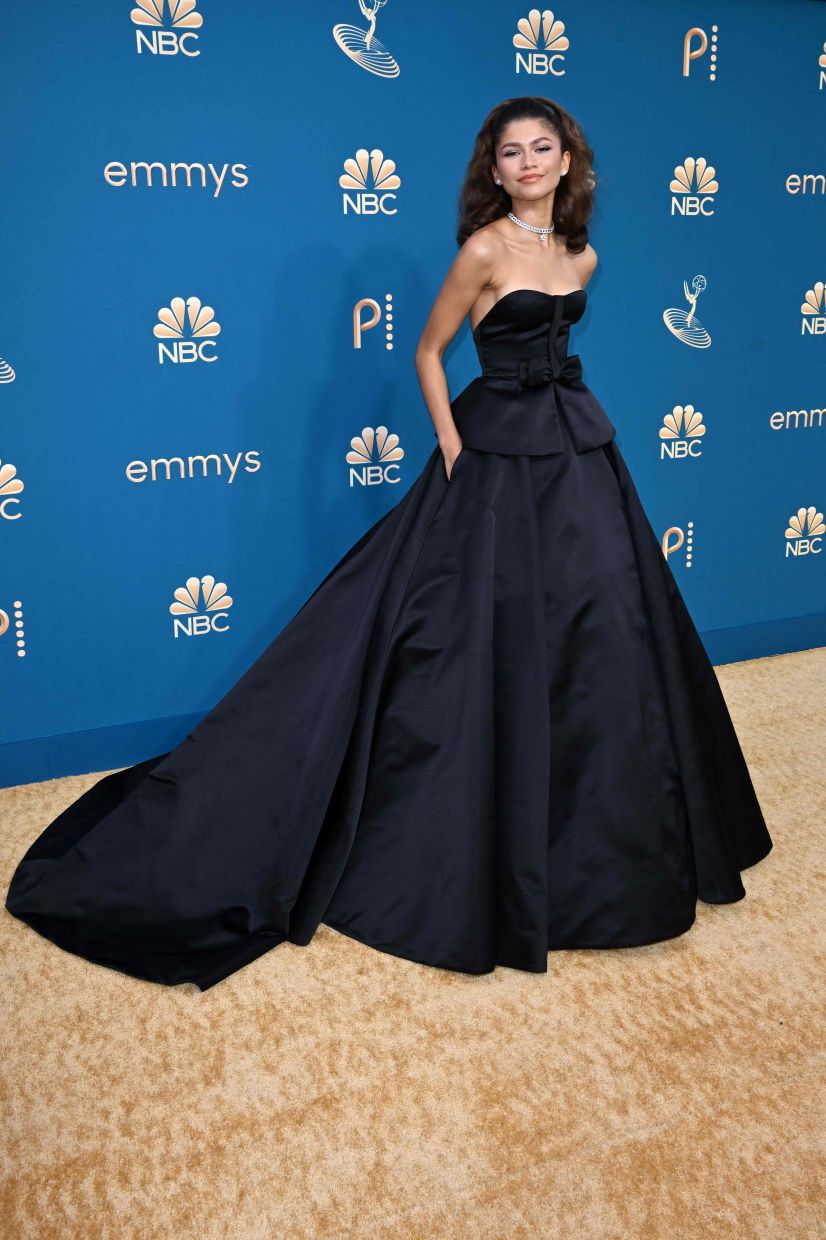 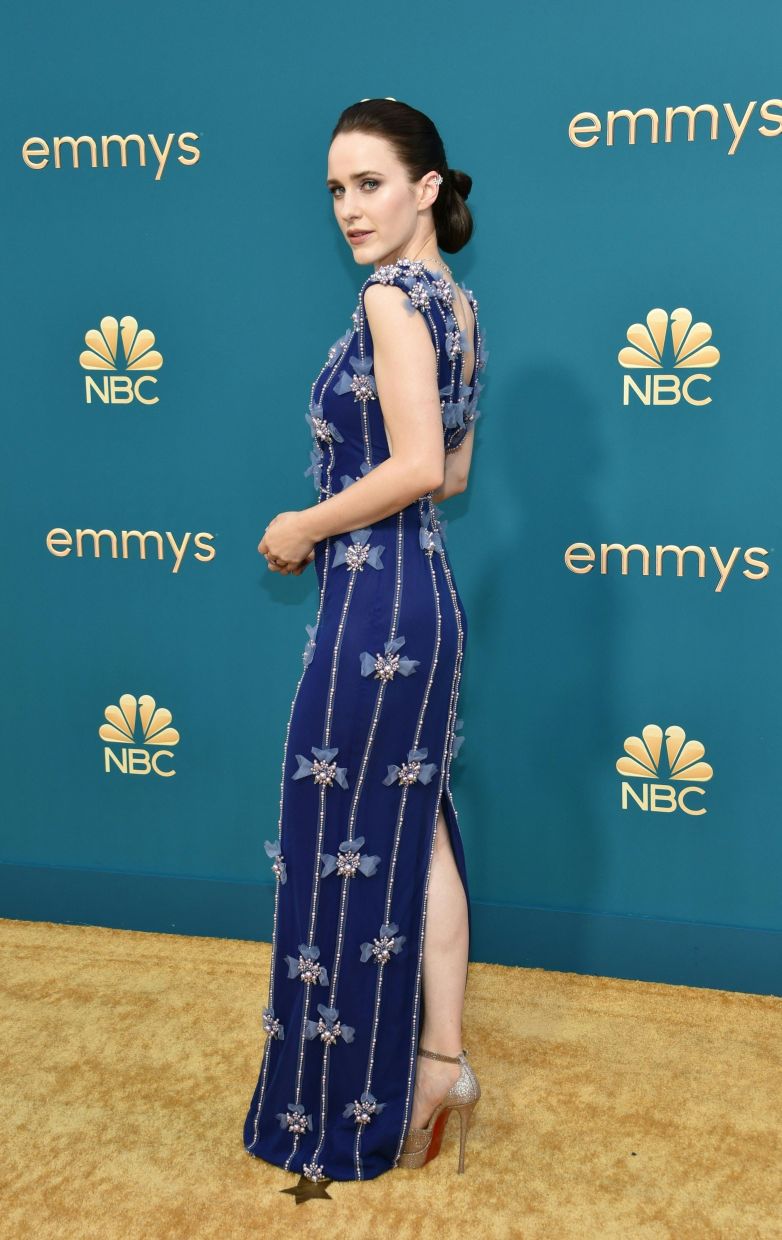 As luxury watchmaking booms, Gen-Z buyers find time in second-hand timepieces
Why mushrooms are the new anti-ageing allies of your beauty routine
More chic than geek? How fashion is changing wearables to be more stylish
No pants, no problem? How Kendall Jenner started the 'no pants' fashion trend
Why it's time to ditch the straighteners and embrace 'bedhead hair'
Worried about hair loss? Maybe it would be better to quit sugary drinks
How fashion accessories are finding a new role in the age of social media
Emily Cooper versus Wednesday Addams: Who is the ultimate fashion icon?
How fast fashion brands are trying to change public perception via social media
Want the same perfect makeup base as Kendall Jenner or Hailey Bieber? Here's how